Rusty Foster’s daily newsletter, Today in Tabs, has been called “the high school cafeteria of New York media,” an apt description for a circle that sometimes feels mired in adolescence. In this case, the cafeteria is located on Twitter and based out of Peaks Island, just outside of Portland, Maine, where Mr. Foster, who turns 38 this week, lives with his wife and three kids.

“There are like no media people where I live,” Mr. Foster, non-descript in a faded black t-shirt and jeans, told The Observer over Stumptown coffee amid the antique typewriters and laptops at the Ace Hotel during a recent visit to New York. “It’s funny, a lot of my friends get the email and they read it just because they like reading what I write but they don’t have any idea what I’m talking about. Like any of it.”

Today in Tabs, which is on hiatus for the summer, is an afternoon cheat-sheet to the online obsessions of mostly 20-something New York mediaites: the insidery squabbles and hate-reads and high-minded-if-fleeting feuds.

The main draw is Mr. Foster’s bemused tone. His opinionated curation cuts a path through the Internet’s constant scroll of links and tweets, while making readers feel that they haven’t missed much by taking their eyes off of TweetDeck, however briefly. His jokes land.

“All of the media and tech chatter is so silly and meaningless, but Rusty is like the dad at the end of a sitcom who comes on and somehow manages to say who was wronged and who was being a jerk,” WNYC On the Media producer PJ Vogt said.

Mr. Foster fell into newslettering while working as a web developer last fall. He had a lot of free time to spend “fucking around on Twitter,” as he put it, and in one tweet, he wrote the phrase “Today in Tabs,” which refers to the open pages on the window of an Internet browser. “Wait is this a e-newsletter I can subscribe to?” New Yorker senior web producer Caitlin Kelly tweeted fatefully in reply.

The digest slowly caught on. Like the Tabs themselves, subscribers, young, tech-savvy and interested in themselves and their friends, trickled in through Twitter. There were still fewer than 1,000 subscribers a few months later when Katie J.M. Baker, then a reporter at Newsweek, told her boss about it. The magazine, which had recently been bought by International Business Times, was relaunching its website and looking for content.

“At the beginning, we were so frantic about getting stuff on the site, so there was really no question,” Newsweek managing editor Kira Bindrim said. “Our site was new and Tabs was cool and forward-thinking.”

If there was something incongruous about a national newsweekly paying a web developer to send out a newsletter to a small group of media insiders, the irony was not lost on anybody involved. But Mr. Foster got paid for what had been a labor of hate-reading love, and Newsweek got to demonstrate that it was no longer the magazine younger readers remembered from school libraries while getting in on the increasingly popular newsletter game.

“Like a resident of Night Vale, I’m both proud and terrified to announce that Today in Tabs is going to be syndicated by the new Newsweek.com,” Mr. Foster announced in his December 9 dispatch, linking to a transcript of the popular fake news podcast (A Prairie Home Companion for a generation who have deemed Garrison Keillor hokey). Referencing Night Vale in his announcement may have been a toss-off, but it was classic Tabs: cementing the author’s cultural authority among those in the know while tipping off those who aren’t. It also girded Mr. Foster’s indie cred against cooptation by a big magazine brand.

He maintained his editorial independence, notably jumping into the critical fray over Newsweek’s cover story purporting to out the inventor of Bitcoin. “Well, those fools at Newsweek stood by the story despite all the… whatever it was that made us doubt it,” Mr. Foster wrote before summing up the critical reaction from various outlets and media figures. “Meanwhile, Newsweek editor Jim Impoco has reportedly been seen striding aggressively around lower Manhattan, gesticulating wildly and ranting about how he will ‘never stop doxxing!’”

“He is kind of like Newsweek’s public editor,” said Ms. Bindrim, who allowed that she pays Mr. Foster “blog money.” (“He could probably harass us for more,” she told The Observer.)

In January, after Nieman Journalism Lab wrote about Today in Tabs, Guardian US finance and economics editor Heidi Moore (roughly 48,700 Twitter followers at last count) claimed that Mr. Foster (fewer than 3,000) stole the idea from her September tweet, which read: “At the end of every day I just want to tweet out my open browser tabs. ‘HERE! THAT’S ALL I KNOW TODAY!’”

Ms. Moore started a Twitter fight over it, which was just grist for the mill: “Welcome to Tabs, coming to you today from deep inside my lower intestine, as I have at this point climbed completely up my own ass and disappeared,” Mr. Foster began his newsletter on the squabble. The result was a 30 percent uptick in subscribers and attention. The two have never met, and, reflecting the ephemeral nature of social media, the Twitter feud has subsided. “That was so long ago—it’s amusing that Twitter disputes are now recounted in stories,” Ms. Moore said when we asked her about the dust up.

“I have nothing but gratitude for Heidi,” Mr. Foster said, explaining that he got more subscribers from the spat. “I thank her for coming out of the blue with that, and I didn’t do anything to cause that, so I don’t feel bad about it.”

Today in Tabs is actually something of a second act for Mr. Foster. Back during the first tech bubble, he started Kuro5hin (pronounced “corrosion”), a collaborative platform for reader-submitted discussion that was a moderate success. In 2002, he moved to Maine from San Francisco, assuming that the income generated from Kuro5hin’s ad revenue would support him. When the bottom fell out of the ad market, users responded to Mr. Foster’s post on the site by donating money.

“It kind of accidentally became a crowdfunding drive, but I was 26 years old and the crowdfunding industry hadn’t been invented yet, so no one really knew what the best practices were, and I had big dreams that I was not able to fulfill,” Mr. Foster said. He raised between $30,000 and $40,000. The money wasn’t really enough to do what he wanted for the site, and it disappeared.

“It left a lot of bitterness among the people who were most on my side, and it’s definitely my biggest professional regret,” Mr. Foster explained. “I will probably not ever crowdfund anything again.”

“It definitely still bugs him,” said Kevin Nguyen, a friend and Amazon editor who, along with Rusty, was part of a social media chat room they referred to as The Boat.

Mr. Foster grew up in Plymouth, Massachusetts, and studied physics and film studies before dropping out of college. But it was the ’90s, so he learned HTML and got a job in Washington D.C. converting Word documents into HTML for government agencies.

“I am technically Gen X because I don’t know anything about Pokemon, but I was raised as a millennial. I went to like a little tiny private school, and we had cubbies and snack time,” he explained. “I didn’t realize this until very recently, but I had this sort of cuddly, supportive upbringing that was not in fashion at the time really. I feel like that kind of set me on this path and I get along well with younger people for some reason.”

According to Mr. Foster, his tone, which is off-hand and sarcastic, is a “pastiche” of ’90s-era Internet cool. He cites Suck.com and Danny O’Brien’s Need to Know email list as influences. Other subscribers see traces of early Gawker, when it followed the ins and outs of media characters and micro-celebrities and Choire Sicha and Alex Balk’s The Awl.

Even though anyone can sign up for Today in Tabs, it is still something you have to know and care about, which confers on it an insider status. It tells people what to think, whether they have been following the Internet squabbles that pop up throughout the day or would rather just wait for Rusty to explain it.

“It’s basically an outrage compendium, and the only reason I think it doesn’t get to him (though I’m sure sometimes it does) is because Rusty is the embodiment of ¯\_(ツ)_/¯,” Time Newsfeed editor and Observer alum Jessica Roy said via Gchat, using the shruggy emoticon popular with the Tabs audience. “He does strike a good tone of being this sort of removed observer but also being in the trenches enough to accurately analyze what’s really going on. He can hang because he’s been on the Internet for so long.”

Mr. Foster draws his entries mainly from the 490 people he follows on Twitter: the conversations, fights, amusing tweets and best links. Getting a mention in Tabs is a badge of honor, even if it doesn’t drive traffic. At press time, Tabs had 6,114 subscribers.

“I don’t go out looking for stuff, I’m not sorting through anything. I’m just reading my Twitter feed and that’s it,” Mr. Foster said. “But if I read your article, and it got to me, and I also read the whole thing, you’ve already gone through a pretty aggressive filter. I do my best to sort of avoid reading anything, so the stuff that gets to me has already been kind of pre-filtered and spread.”

At the end of June, Mr. Foster announced that Today in Tabs would go on summer vacation. A groan was heard in The Observer newsroom and reverberated throughout media Twitter. But nobody, not even readers who have come to rely on Tabs to get through their afternoons, can blame him.

“The only problem with an undertaking like Tabs is that it forces the proprietor to stare every day into the faces of things he despises. That’s no way to live or work,” Choire Sicha told The Observer in an email.

“I’m a little afraid that if I’m not enjoying doing it, it will start being not fun to write, and then it will start being not fun to read,” Mr. Foster said. “I don’t want to get burned out doing it, and there is definitely a risk of that, and so before any of that happens, before there’s any sign of burn out, let’s take a break and I’ll do some other things and I’m definitely planning on coming back to it in September, I think.”

The media’s high school cafeteria is closed for the summer. But Mr. Foster has been tweeting more since Tabs went on break. Even if he’s on an island in Maine, sailing with friends who don’t know that a manual retweet is a Twitter faux pas, he can’t really leave the Internet. 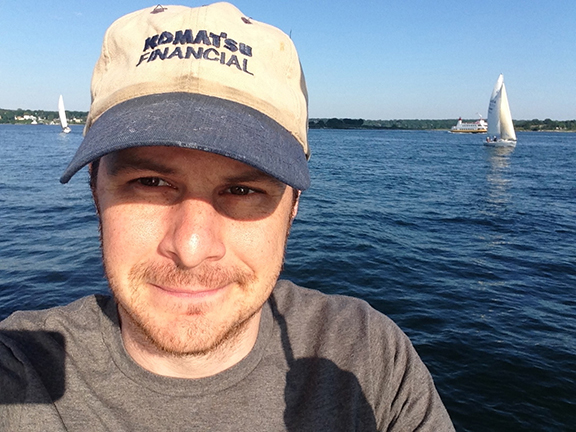