Before I get to re-capping, I have to say something: True Blood finally did it. They killed off a character that really resonated with I think not only me, but every single viewer watching at home. I think the reason for this was this character’s inherent goodness, their sense of humanity while still retaining the qualities of a perfect hero. They had both an animal magnetism and a human heart.

That this character died so senselessly, so violently, it produced my first emotional moment watching this show in a long time. I admit it, I shed a tear along with America. So with this I bid farewell to a brave a character, a righteous character, and bluntly stated, a character with probably the sexiest body on the whole show. Oh, you thought I meant someone else? Yeah, yeah I’ll get to him.

After a cold open revealing that Sarah Newlin is actually in an L.A. yoga class taught by some guy, we are brought right back to Rhone Valley, France with sad Pam and slowly-dying-of-Hep-V Eric. After a brief conversation in which we learn that even Eric doesn’t give a shit that Tara died, we are treated to an Eric flashback.

Turns out Eric is holed up in Rhone Valley because he was pretty into this French chick named Sylvie in 1986. Besides that, we learn that young Eric (well, relatively young. Like already 800 years old young,) is a big fan of telling people to go fuck themselves, which he puts to good use when the Vampire Authority’s Nan Flanagan shows up to tell Eric to stop being such a skamp.

Back in the present day, Alcide finally notices Sookie is missing after what appears to be the longest shower of all time. Sookie, in case #4,569 of her being a shitty girlfriend, is on her way to a stupidly dangerous plan with Bill. To make sure Bill can “feel her” again, she takes some of his blood. I have to question whether they needed to do that while he was driving. Basic driving safety still applies to the undead, Bill.

Meanwhile, Bon Temps continued its mob-forming, semi-racist path of stupidity. Adilyn and Rocky are still locked up in the police station, but at least they can pass the time by making ou…just kidding. Jessica and Andy show up to “save the day.” I know it’s a rescue mission, Jess, but cock-blocking is still cock-blocking.

Sam and his delightful vampire partner Matt come across Bon Temps resident anti-vampire mob, led by Vince. I’m a big fan of Matt the vampire, I hope nothing bad happens to him.

Something bad immediately happens to Matt. Vince blatantly murders him and declares that he is Mayor now. I don’t claim to be an expert on Louisianan politics, but I’m not sure that’s how that works, Vince.

“Translation: you black he’s white,” Kenya’s friend explains. I’m also not sure that’s how that works. Luckily Sam is a bird as well as a mayor, and flies to safety.

Meanwhile, Violet is being mean to Jason. Again. Can we talk about Violet for a second? In a show where I don’t really like anyone, I really don’t like Violet. She’s just mean, all the time, for no reason other than she was apparently raised in medieval times or something. I’ve been to Medieval Times and it did not make me so angry. Quite the opposite.

Anyway, Jessica and Andy interrupt to combine forces with Jason and Violet, forming True Blood’s A-Team. If the A-Team was made up of a ginger vampire, a bitchy, medieval times vampire, a man-child, and Foghorn Leghorn in a cop outfit. Also because it’s True Blood they’d call it something fucking stupid like the V-Team or something. (Ed note: And it’d be a metaphor!)

At Fangtasia, the Hep-V vampires continue to argue. One of them, still bloody I assume because he got beat up by Eminem in 8 Mile, enters the basement to interrupt a Wiccan circle led by Holly.

“Which one of you thinks she’s Harry Potter?” he asks.

Holly gets taken on the latest Hep-V-vampire hunt for humans, thankfully getting us out of the basement of Fangtasia.

The V-Team comes across the anti-vampire mob, which has apparently just been hanging out on the same road all night. Maxine Fortenberry, showing off some of the marksman expertise she showed last episode, shoots Jessica. In retaliation, Violet rips out Maxine’s heart. Like literally. All that bad stuff I said back there about Violet? I take it back. Every word. #TeamViolet.

Meanwhile, in the woods, Sookie and Bill talk about Six Flags, and the super scary ride Sookie went on when she was nine.

“I’m immortal, and that would scare me to death.” Oh Bill, you clever beast. Good thing the lack of blood-thirsty, rampaging vampires slowly surrounding you allows for such coy small talk.

After some sexual tension between Lafayette and James (which was apparently too yucky for former-James Rick Grimes), we are brought back to 1986 for more France flashbacks and butt shots. Some representatives from the Yokonomo Corporation show up to rudely interrupt yet another Eric-on-Sylvie moonlight bang sesh. Poor Sylvie, who spent about 90% of her screen-time naked and crying, gets a sword through the body, Red Wedding style.

Apparently Eric still sulks over the whole ordeal, because that is exactly what he continues to do in present day France. Only the news that Sarah Newlin is alive and well gets Eric to finally stop being such a lazy bum and get off the couch. Seriously, Pam, who is he to just sit there and die of his incurable disease.

Speaking of Sarah Newlin! She’s still in Los Angeles, having weird yoga sex with  the yoga instructor from the cold open. With Sarah selecting a post-coitus bottle of wine, the same Yokonomo Corporation ninjas show up to inquire about her whereabouts.

“I cannot tell a lie. Yes, I know her,” yoga instructor says. The Yokonomo guys ask where she is.

“This, I will not tell you,” yoga instructor answers, and promptly has his head cut off.

What exactly was his rationale there? What purpose did it serve to tell them the first thing, but not the second thing? I mean we the audience know the Yokonomo guys aren’t exactly nice, but you have to think the yoga instructors got to be thinking he has a better chance of not losing his head if he just says off the bat, “Nah, never met her.” He says he cannot lie but then he sort of lies by omission there, no? *exasperated sigh*

In the episode’s finale, the Hep-V vampires find Sookie in the woods, just like she planned. Luckily, Alcide, Sam, Jason, Andy, Jessica AND Violet all arrive at the exact same time to save Sookie from being eaten. Hooray /sarcasm.

But don’t celebrate too much, because two members of that pesky mob fire from the bushes, hitting ONLY ALCIDE. Like, I know he’s a big target but come on. Why this guy? He genuinely was the only character on this show that didn’t in some way deserve to die.

Well, True Blood is definitely showing it isn’t afraid to kill off characters three episodes in (LOL Tara, BOO Alcide). In Alcide’s case, however, at least we can say he died the way he lived: naked, and saving Sookie from a dangerous situation that she is 100% responsible for. 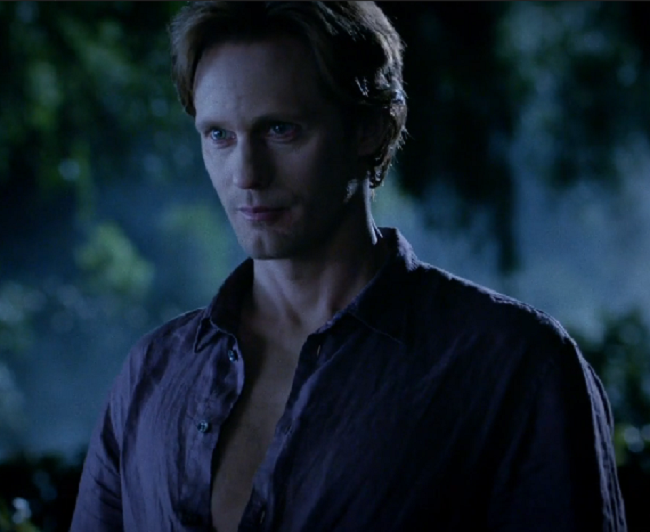