The fourth episode of True Blood’s final season revolved a whole lot around planning. Namely, it was the human residents of Bon Temps (but not, like, the anti-vampire mob humans, I’ll get to them in a little) putting together a plan to rescue Arlene, Nicole and Jane from the basement of Fangtasia. And this plan involved reading people’s minds, gathering up vampires and rallying manpower, all of which I was totally distracted from because of one thought:

This is a stupid fucking plan. Why didn’t they just go during the daytime?

You see, the crux of this rescue attempt (of course masterminded by Sookie) is that they can’t possibly succeed without the help of vampires like Jessica and Bill. “Whether we like it or not, we can’t do it without the vampires,” Jason says to Sam, when Sam suggests they just go and save their loved ones now that they know where they are. Things get a little heated.

But, like, why not go to Fangtasia when the sun is up? You know, the sun? The giant ball of light that is 100% fatal to vampires and drives them underground? Daytime? The only time humans have any advantage whatsoever over said vampires? (Ed. note: Aren’t they already sick vampires, too?) The time when vampires have to be asleep or they will start bleeding out of their ears and stuff? Really, my plan would have been 1) Go to Fangtasia 2) Open the Blinds 3) Well there isn’t really a three, because that is all you need to do.

But no, they are absolutely adamant that the only logical thing to do is wait until the sun goes down, the horrifying blood monsters that vastly outnumber them awake from their slumber, and just run into the bar all willy nilly. But it will be okay, because they’ll have their good vampires on their side and absolutely nothing will go wrong.

Also, I think I might have missed the group chat where people are clamoring for an Eric flashback every single episode. I suppose he’s not as spry in present day as he used to be, but let’s not drive this thing into the ground.

This particular flashback picks up where the last left off in 1986 (quick recap: naked French people, Yakuza, horrible 80’s haircuts). The Vampire Authority has sentenced Eric and Pam to life in Louisiana, where they will be forced to run what is essentially a Blockbusters.

“This place smells like sperm and piss and bad hair dye,” The Magister says, accurately describing both Shreveport and my senior prom.

Fast forward a little bit and into the video store walks a young Ginger, at the time just a college student with an interest in vampires. She is intrigued by Pam but downright shocked by Eric — although looking back I’m not sure if it was because she inexplicably just knew he was a vampire, or if she thought mid 90’s Justin Timberlake had just walked slowly out of the back room.

Flash forward yet again to 2006 when Ginger, now an employee, buys what later becomes Eric’s Fangtasia throne and gives Pam the idea to turn the video store into a bar.

Anyway, Pam glamours it right out of Ginger’s head and takes the idea for her own. Personally, the only purpose these flashbacks served  was to remind me that at one point Eric actually was kind of a vampire badass that sat on a sweet wooden chair and gave zero fucks about humanity. Now I’m just bitter by the amount of fucks he began to give over the past seven years.

Back in the present day, Sookie tries to rally the troops by being kind of a condescending ass. My favorite example of this is Sookie convincing Jessica to feed again. You see, everyone else was all exasperated with Jessica like “Jess, are you really still hung up on brutally murdering those three innocent girls?” But Sookie finally got through to Jessica by telling her straight up she doesn’t give a fuck about Jessica’s angst, and that their friends in Fangtasia are the main priority.

(Sidenote: it isn’t often that True Blood delves into straight irony, but Sookie telling someone else that she didn’t give a fuck about her stupid, un-entertaining problems and to just get on with the cool vampire stuff already was totally meta.)

Anywho, Jessica agrees to feed on Lafayette while James looks on, and you could stake the sexual tension between him and Lafayette with a wooden stake.

Finally, the rescue team assembles complete with five vampires to go against the 15 or so at Fangtasia. Five. Good thing they fucking waited until the sun went down. Luckily, just at the last second who shows up on the doorstep but Eric and Pam. (Ed. note: Is it because Eric can fly? Remember that? Eric can fly. No one else can fly, but Eric can.)

Alright, listen, I had at this point accepted that they wanted to wait until night time to implement their plan because True Blood. Whatever. But they know exactly where Arlene, Nicole and Jane are being held now, and they know that every second they wait is another second closer to their bloody deaths.

So why, why, fucking why did that incredibly slow-paced hugfest between Eric and Sookie need to take place right that second? Like did Sookie really need to take that time to say “Oh, Eric, I know I’ve been talking this entire episode about how urgent it is to rescue my friends, but things have been so tough for me lately.” Take your time, Sook, no one you know is being held in a basement dungeon or being used for food.

The rescue squad finally show up to Fangtasia and things start off with a bang, which actually means with Eric weakly punching a wall.

Eric finally gets through the dreaded wall, and him and Pam make moves to rescue the hostages. Bad news though, because Arlene is being fed on by the Hep-V vampires. Which, let me reiterate, wouldn’t have been happening during the daytime.

Eric puts a stop to this by bringing Sookie and her sweet, sweet faerie blood into the bar, because no True Blood plan is good unless it involves putting Sookie in maximum amount of reckless danger. Eric and Sookie are confronted by the whole Hep-V crew, including terrible British accent vampire and my personal MVP of this episode, ‘Tig Ol’ Bitties’ vampire.

Jessica, James and the rest of the vamps barge in and it is about to be a showdown, when Vince and some other anti-vampire mob townsfolk show up and are you fucking kidding me? These people planned to show up to Fangtasia as well and even they decided to wait until sundown? They didn’t even want to rescue anyone. They literally could have just shown up at like 3 in the afternoon and burnt the place to the ground.

While all this is happening, Arlene is busy bleeding to death inside the bar. In a stupor, she sees her husband Terry who you may remember sort of killed himself by hiring someone else to sniper him to death last season and then being glamoured into forgetting about it. Ghost (?) Terry has some sentimental moments with Arlene, but eventually convinces her to stay alive. This means Arlene has to take some of Keith the Vampire Drummer’s blood, so bring on the dream sequence of Arlene and Keith having sex in a meadow or something.

Eventually, after some super sweet slow-mo action, all of the Hep-V vampires have been reduced to bloody piles on the ground. So, there goes really any antagonists this season had.

With Arlene cradled in her arms, Sookie shares a wordless look with Eric before he leaves, and there are a lot of feelings packed into that look. 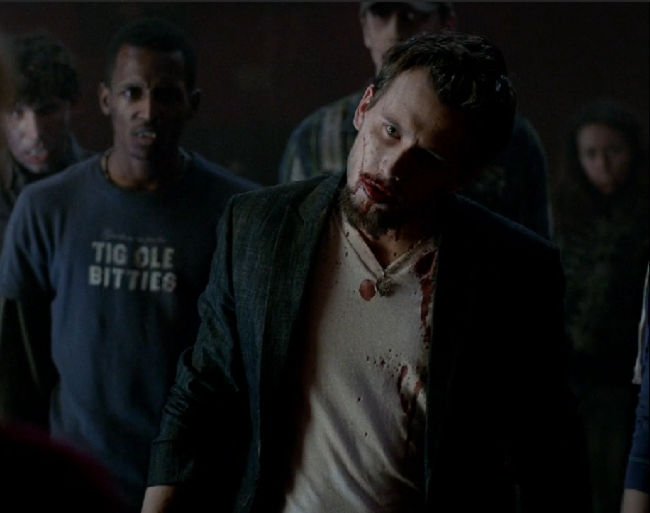