I mentioned in last week’s True Blood recap that the show doesn’t often delve into that much self-aware irony, but it seems that I was wrong. The title of this episode is ‘Lost Cause,’ and it was quite possibly the worst, most useless episode of True Blood ever, situated smack dab in the middle of the show’s final season. Lost cause indeed.

Because as much as things made no sense in the first half of this season, at least things were happening. Horrific things. Violent things. Tara was turned into a pile of blood and guts. Alcide got shot right in his big boring werewolf head. There were kidnappings and murders and rapes and an entire horde of diseased monsters stalking the town, creating an impending sense of doom and gloom that only ended in a violent battle in which no less than four town members were brutally murdered and in some cases fed upon.

So what is the appropriate response to all this? In real life, it is severe PTSD, a crippling fear of the dark and probably some exorcisms. In the True Blood universe? It’s time to party, baby.

That is exactly how Lafayette and James plan to get Sookie out of her “Aw shucks my best friend and boyfriend were just murdered” funk — planning a rager at Sookie’s place without really telling her they were doing so. “What would Tara want? What would Alcide want?” Lafayette asks as a a way to justify this shitshow and the answer, like most occasions, is they would want to take a bottle of Jose Cuervo to the face.

So the whole town shows up for this thing — vampires included — and we learn a lot about these characters during this affair. First and foremost, we learn that every single resident of Bon Temps is terrible at dancing. Seriously, whoever was in charge of “background extra dance training,” shame on you.

Holly, Jane and Arlene, fresh off of their escape from the basement of Fangtasia, celebrate their rescue that was in no way orchestrated or helped along by them in any way. “We sure dodged a bullet,” Arlene yells in between shots. What about those that were drained of their blood horrifically right in front of Arlene’s eyes? Fuck them! They obviously weren’t friends with enough good vampires. Another round.

Andy Bellefleur finds himself outside the pary, having a heart to heart with the vampire that murdered three-quarters of his offspring, Jessica. This somehow ends up with Andy telling Jessica she just needs to move on, and then admitting he is going to propose to Holly right there at the party. Listen, there was one time I didn’t speak to my father for a week because he ate a leftover chicken parm that belonged to me, even though I knew how delicious it probably looked to him. In no way would I be giving a pep talk to the vampire that ate my children, even if I knew how delicious their sweet, sweet faerie blood looked to them.

Anyway, Andy does end up proposing — with Sookie’s gran’s ring no less — and it goes pretty well. Holly says yes and no one explodes or gets decapitated or anything. This show is really losing me. This coupling serves really no other purposes then to add a married couple to Bon Temps and therefore another character for which I will misspell Bellefleur 10 times per recap.

But seriously, how awesome is this party? Everyone’s favorite character Lettie Mae drugged her pastor husband — who naturally was against his alcoholic/drug-addicted wife attending — just to get there. What a card! I’m not too sure what drug she used to put him to sleep, but I think it was called “Lettie Mae’s character arc.” Nevertheless, she shows up and says some nice words about Tara, because I guess the show’s writers finally had some spare time to pretend anyone cared about Tara dying. It’s a nice speech, but I have this feeling Lettie Mae is going to do something crazy later on at the party. Let’s keep our eye on her.

James pretends he isn’t gay some more and asks Jessica to leave, so she calls him a wet blanket. Obviously, she hadn’t peeped his sweet dance moves yet.

Upstairs, sad Sookie and drunk Arlene have a deep convo about how much they can relate to each other. You see, because Arlene’s army-vet husband paid someone to murder him but then had the memory glamoured out of his head before that guy he paid murdered him anyway, and Sookie’s hulking werewolf boyfriend was shot in the head by an anti-supernatural lynch mob in the woods. Basically the same situation.

Outside, James and Lafayette have a conversation (this episode is just filled with conversations btw). Long story short, the two of them finally kiss and end up having sex in the least conspicuous place for two men to have sex — namely, about ten feet from the party. Jessica catches them and gets real mad, despite the fact that she hadn’t noticed her Jon Snow-lite, pouty boyfriend was gay this whole time.

Lettie Mae does something crazy because duh. While doing her faerie mind reading thing, Sookie hears Lettie Mae thinking “I need some of that vampire blood. I don’t care if I have to stab her to get it,” which is a really specific thing to say, even inside your own head. She ends up takinga knife right through Willa’s shoulder, but Willa’s fine because Lettie Mae’s storyline has no reason to exist and also Willa’s a vampire. Violet gets pretty mad about the whole thing, but what else is fucking new, am I right?

Upstairs, clueless Jessica and more clueless Jason have a deep convo about how much they can relate to each other. You see, because Jessica’s boyfriend is a gay vampire that just got caught having sex with a medium, and Jason’s girlfriend is a rage-fueled vampire from medieval times. Basically the same situation. Anyway, they inevitably end up having sex over the whole thing because that’s how problems are solved. Because no one on this show has heard of discretion, they do it as loudly as possible, and Violet hears everything. Stay tuned for drama.

Were there flashbacks during any of this excitement? Of course, because I’m pretty sure no vampire on this show can go ten seconds without having flashback. This week, we get Civil War era Bill, looking like he is about to shoot a commercial on set at the Compton Family Farm House. At least I know why he keeps having all these flashbacks.

In these flashbacks, we learn that Bill tried to defect to the North along with a bunch of slaves because Bill’s a stand up guy. They are stopped, however, by Charles the Asshole. He gets this title due to the untimely death of Vince the Asshole last episode (RIP VTA). Charles fills in the role nicely, with his penchant for rousing speeches, murdering those that are different than him, and his big, mean asshole face.

Is anyone doing anything interesting this episode? Well, we have Eric and Pam on the hunt for Sarah Newlin, so there’s that. Their search leads them to Sarah’s vampire sister in Dallas. They know this because Willa was aware that Sarah has a vampire sister. No one else in the world does, but Willa knew. Anyway, Sarah’s vampire sister (who has the same tree tattoo on her chest as Eric, awkward) lets slip that Sarah is conveniently in Dallas, probably at a gala attended by her parents. Pam and Eric attend the gala, which is incredibly worth it if only because Eric out-cowboys cowboy Bill so hard.

Who else shows up to the gala? Well, Sarah, of course, because this show only has five more episodes. And the Yakuza, naturally. Pretty much everyone at the party except Sarah gets gunned down by the Yakuza. There is a moment where Sarah is running and Eric rounds a corner in slow motion, exactly like that moment in Terminator 2 when Sarah Connor sees Arnold Schwarzenegger for the first time. You know, right before Alcide’s dad shows up? Boy, Terminator 2 is a good movie.

Anyway, Eric is interrupting from his Sara-murdering by the Yakuza members, who he dispatches really, really easily. Which begs the question, why he didn’t do the exact same thing in 1986 when the same amount of Yakuza members were holding his French girlfriend hostage?

Back in Bon Temps, Bill winds down from the party with a nice bath. But, plot twist, when he looks in the mirror it is revealed that he too has been infected with Hep V. Just like mostly everyone else. So maybe everyone on this show is just going to die. Humans, vampires, everyone just dead. And I’m going to respond exactly like these characters apparently respond to death. 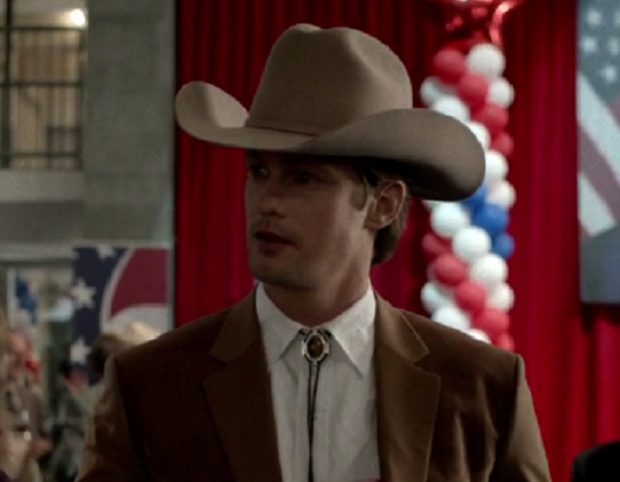