This week on True Blood: Doctor’s visits! Teenage hormone problems! Contract negotiation! A law attorney! The waiting room for that law attorney! True Blood, please, save some excitement for the finale.

Before all those thrills, we check in on Eric and Pam’s Yakuza probs. Despite having the vampire equivalent of AIDS, Eric still manages to fend off about 10 Yakuza members. Pam, however, is just not as good at slow motion vampire fighting and somehow gets subdued. Fucking Pam. Now the two of them are the prisoners of Katsurou Ryouichi, AKA the North American president of Yokonomo Corporation AKA Mr. Gus Jr., AKA Jackie Chan from Shanghai Knights.

The two parties argue over who gets to kill Sarah Newlin for a little while, before hashing out a deal where Eric gets to do the actual killing while Mr. Gus Jr. gets the body…which, unless Mr. Gus is into some weird stuff, seems like the short end of the stick for the Yokonomo Corporation.

Back in Bon Temps, Bill vows revenge on the scientists who created Hep-V and decides that with his last days on Earth he will track them down one by one and…LOL JK he just Googles an attorney and broods in the dark a little. He sets up an appointment with the attorney to get his estate in order, and Jessica overhears everything. Sad Jessica continues to break the record for most blood-tears shed on a television show.

Let’s check up on Lettie Mae, that crazy knife-wielding drug addict. Lafayette takes her back to his house after the party, where they find James waiting for them. Sweet home invasion James, you charmer. Lafayette agrees to let James stay over, but not before James has the genius idea to give Lettie Mae some of his blood. Lafayette is all, “If she’s tripping I’m tripping too.” The both of them sample some James blood, then proceed to do a spot on impression of my friends and I in college. What’s better than Bill Google-ing law attorneys? Bill sitting in the waiting room for a law attorney. Turns out there is a waiting time of 5-7 hours, according to that snarky receptionist who just couldn’t care less, and the waiting room is filled with veiny Hep-V victims. Which is kind of gross, but I suppose it could be worse, right Bill?

Meanwhile, Andy Bellefleur walks in on Wade having sex with Adilyn, which is awkward because A) They are about to be siblings B) Adilyn is technically less than a year old and C) Wade looks uncannily like Frodo Baggins. “I’ll do it, I’ll take the infant faerie’s virginity.”

Pregnant Nicole — just now realizing that Bon Temps is infested with werewolves, vampires, werepanthers and apparently hobbits — decides she is not going to stick around. She tells this to Sam, calling him the “Mayor of Crazy,” which is hilarious and henceforth the only way I will be referring to Sam. “Bon Temps is the only place I’ve ever felt safe,” the Mayor of Crazy retorts, proving just how crazy the Mayor of Crazy truly is.

Lafayette and Lettie Mae are still off running around Tripping Balls-ville, where they come across Tara on a cross speaking in tongues with a snake around her neck. Fun fact, if you play Tara’s gibberish in reverse you can actually hear Rutina Wesley auditioning for a better role.

Sleeping after some off-screen vampire sex (lame), Jason gets a call from Jessica, urging him to get Sookie and bring her over to Bill’s house. He leaves, thinking Violet is still asleep but actually she heard the whole thing. It’s okay, though, because she reacts with that cool level-headed attitude we’ve come to expect from Violet. At Bill’s house, Jessica divulges that Bill has the Hep-V. Sookie does one of her classic “but..that means..but…uh” faces and realizes she should probably get tested because she got sprayed by Hep-V blood back in episode 3, then Bill fed from her. But Bill’s still waiting in that darn waiting room, and his Hep-V veins are going cray-cray. Jump from the waiting room to a doctor’s office, where Sookie is getting her blood taken. Just in case this show hasn’t beaten you over the head with the fact that HEP-V IS JUST LIKE AIDS IT’S A METAPHOR FOR THE AIDS OUTBREAK AIDS AIDS AIDS check out this sign in the doctor’s office. While all this is happening, Arlene and Holly are cleaning Bellefleur’s, which is only notable because I’m wondering if anyone ever got all those dead bodies out of the freezer.

Lafayette and Lettie Mae are still chasing after hallucination Tara in hallucination land. Hallucination Tara leads them to a hallucination house that looks like a hallucination barn, where she is digging some holes. Just as Lettie Mae realizes that this is their old home, the Reverend pulls her out of the vision, proving my medical hypothesis that the best way to get someone to come completely down from a drug-induced trip is a stern arm-shaking. But now, for some reason, Lafayette is on Lettie Mae’s side with the whole Tara thing. Which makes no sense, because his argument is basically “I saw Tara after I took the crazy vampire drug that makes you see things that aren’t real, too!”

Sookie finally gets some positive news, and by that I mean she has Hep-V. Womp womp.

Bill won’t find this out for a while because his number is finally called and he meets with the attorney. And finally the audience is clued in to the ins-and-outs of vampire law regulation. Turns out, the state does not recognize progenies as legal family members. Also, vampires can not amend their wills because technically they are already dead. However, they are allowed to adopt posthumously, so there’s that (side note: I’m actually kind of interested in all the things vampires are allowed to do posthumously. Can they rent a car? Buy a timeshare? Subscribe to Netflix?).

Elsewhere, Violet finds Adilyn and Frodo having sweet sibling make out time at Fort Bellefleur. Because she is still angry about Jason, Violet pretty obviously kidnaps the two teenagers under the guise of having an even sweeter make out spot. Poor Frodo, where is Samwise Gamgee when you need him. Oh, right.

Back at the Newlin sister bonding time, Sarah Newlin insists she is a changed woman. When her sister resists, Sarah reveals that there was an antidote to Hep-V, and she drank it back at Vamp Camp in season 6. So Sarah is the cure now. Cut to Eric, Pam and their new Yakuza buddies showing up, and Sarah’s sister is completely healed. So, good news for the other 90% of the characters in this show with Hep-V.

I don’t want to pretend to be a scientist but doesn’t medicine like, eventually leave your bloodstream? How is Sarah still “the cure” when she drank that antidote months ago? Ah heck, there’s only four more episodes to go, I’m sure True Blood wouldn’t explain that away in any sort of asinine, ass-backwards way. Not my True Blood. Never. 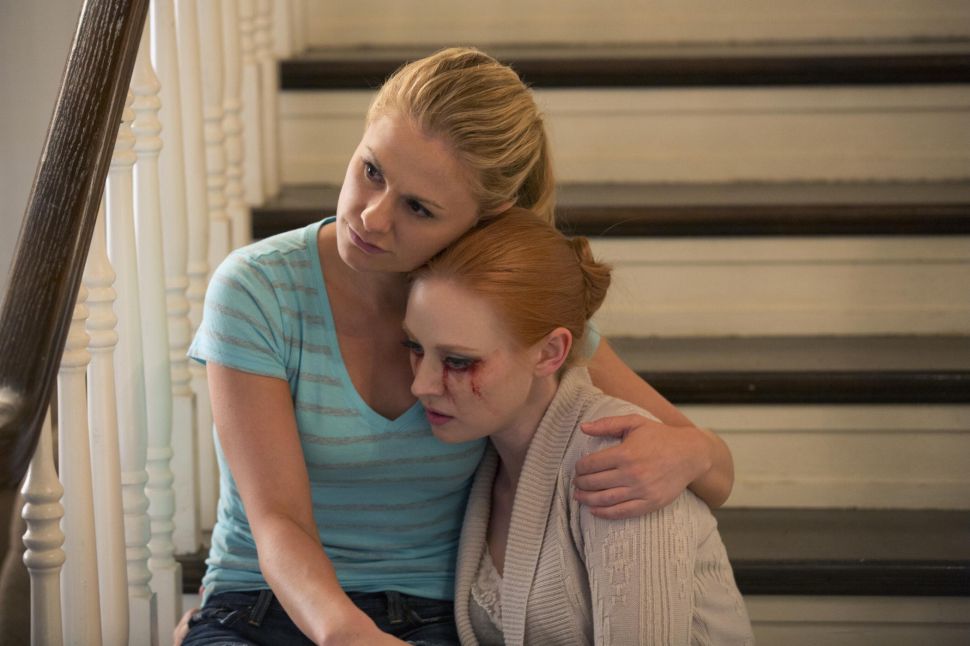