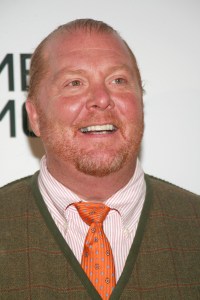 If your Thursday morning is getting off to a slow and lazy start, you could do worse things than watch renowned hedonist Mario Batali swing by the Frick with venture capitalist Fred Wilson (not to be confused with the other Fred Wilson). It’s for Mr. Batali’s program The High Road, something that we had no idea existed. It’s kind of like No Reservations for those with tiny attention spans. It’s 10 minutes long.

“This is one of the most important Rembrandts in the world,” Mr. Wardropper says, referring to Self-Portrait (1658), as a ponytailed Mr. Batali looks on, pensive. “It’s rather sardonic—it was painted shortly after he became bankrupt.”

“This could be us in the future here, Fred!” said Mr. Batali, a multimillionaire.

“Oh, so it’s a message!” said Mr. Wilson, a multibillionaire.

It goes on like that. Mr. Batali seems over the Old Masters and talks to Mr. Wilson about Twitter for a while. Then they walk through the parlors for a while and go bowling in the Frick’s private bowling alley.

Watch Molto Mario in all his museum-hopping Croc-rocking glory here.