I went into Manhattan aggravated by the superfluous punctuation used in the show’s name and subway ads. Here is what they all said: “MANH(A)TTAN. Nuclear. Family.” I couldn’t even focus on what the show was about because I just wanted to take a red marker to the billboard — and write to the show’s creators and let them know it wasn’t too late to rechristen their baby The Manhattan Project, to avoid confusion with the other Manhattan. You know, the movie. Or the drink. Or the borough.

But I decided to watch the show anyway, because it seems like a Frankenstein’s monster of recently successful TV tropes. It’s got the wardrobe of early Mad Men, the scenery of Breaking Bad, a bunch of impressive producers and directors who’ve worked on Masters of Sex and The West Wing. It looks like it was shot entirely through the Brannan filter on Instagram. What could go wrong?

Not a ton, as it turned out. I really enjoyed the first two episodes of Manhattan, even though its characters are as tense and stressed out as post-separation Bruce and Kris Jenner. Thanks to the wonders of modern scripted television, though, watching Manhattan is much more gratifying than Keeping Up With the Kardashians ever could be.

In the first episode, we see a young family, Charlie and Abby Isaacs and their son, moving to their new home in a town without a name. It’s known simply as P.O. Box 1663. The New Mexico desert landscape is harsh, and bomb blasts shake the land, leaving anyone without a security clearance pretty perplexed.

No life can flourish besides, apparently, head lice. The town’s children have all been shaved bald to combat an outbreak. This does wonders to further creepify the mise-en-scène, as you’d imagine.

The people at work on building the atom bomb — which they call “the gadget” — can’t tell their loved ones what they’re doing. “Our work is so classified,” one character says, “the Vice President doesn’t know we exist.” This may conjure an image of Joe Biden screaming “YEE-HAW!” atop a nuke that he’s mistaken for a mechanical bull.

Regardless, the project is in full swing when we (along with Charlie and Abby) are plopped into the story.

When Charlie finds out what he’s been moved to P.O. Box 1663 to do, he’s horrified. He continuously engages his higher-ups in ethical discussions about the bomb and has no choice but to keep his wife in the dark as she tries to fit in with the other wives on the base.

The constant secrecy is mostly taking its toll on Frank Winter, the project’s leader. He suffers from both tinnitus and Terminator 2-esque nuclear night terrors. He’s the scientist with the most character development thus far, and homeboy is stressed. The first two episodes are rich with subplots, but none of the other workers on the base are given as in-depth a character study as freaked-out Frank.

His wife, Liza, has put temporarily hung up her Ph.D. to join her husband on this secretive mission. She’s “not like most women,” she handily explains in the first five minutes of the show.

That’s the show’s one flaw: some of the dialogue is stiff and clichéd. In addition to the “not like most women” line, Liza also delivers a regrettable monologue to her ailing husband, comparing the two of them to flowers. She is really into flowers. There’s also a predictable “this doesn’t look like Cambridge” line from Rachel as they arrive on base.

There’s not a ton of character development in the first two episodes, but that’s probably a function of the show’s premise. The characters have to be guarded. The only one who displays any exuberance is Frank and Liza’s daughter, who comes close to redeeming all of the shoddy dialogue when she storms out of the room yelling, “It’s Kafka-esque!” when her parents won’t give her what she wants.

Still, Manhattan succeeds in creating a stressful, secretive atmosphere that pulls you in rather than repels you. A twist at the end of the second episode demonstrates that this show isn’t going to be concerned solely with secret-keeping — and that when characters fail at keeping things under wraps, there are dire consequences.

(CORRECTION: An earlier version of this post erroneously stated that the show’s action took place in Nevada instead of New Mexico.) 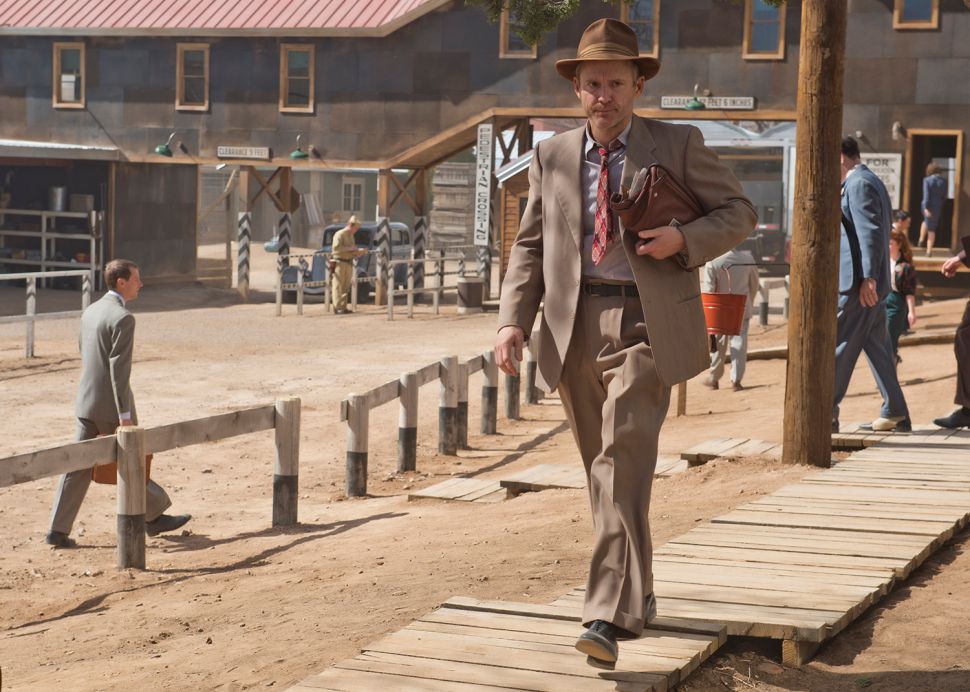