One of America’s most beloved sitcoms, Seinfeld, celebrated it’s 25th anniversary this month and as usual I can think of no better way to express my adulation than to dress like my favorite character.

What, you think this odd?

Well friend, I am not alone. Look around (if you happen to be sitting somewhere in Brooklyn) a lot of people are doing it (in Brooklyn). Plain, oversized sweaters, no-name athletic apparel, mom jeans?? Uh-huh, told you. The kids are calling this look Normcore, a sort of anti-fashion movement intended to promote “sameness” and lessen the importance of name brand clothing. Followers of this movement are more likely to emulate the fashion choices of Cosmo Kramer than Kim Kardashian.

Though still in it’s genesis, Normcore is sweeping the country! (O.K., well…it’s sweeping Brooklyn! But the country is sure to follow.) The only real trick to nailing the Normcore look is to straight-up copy the looks featured on Seinfeld. It’s easy, really. Simply find a pair of Elaine-inspired over-sized reading glasses and an old pair of worn, leather loafers like those George seemed to live in on the show and incorporate them into the wardrobe you keep hidden in the back of your closet. You know that big, faded flannel that you only wear during a post break-up ice cream binge? Pull it out! And those awkward mid-calf length white socks … the ones you fold down and tuck into your sneakers because your’e too cheap to spring for the more socially acceptable ankle length version? Yes. The time has come to don those babies too. Put all of these seemingly unattractive pieces together and yada, yada, yada, Normcore.

Still don’t get it? Not to worry, I have taken the liberty of putting together four outfits inspired by this now classic sitcom that should come in handy whether you are celebrating 25 years of Seinfeld or just feigning comprehension of pop culture fashion movements … not that there’s anything wrong with that. 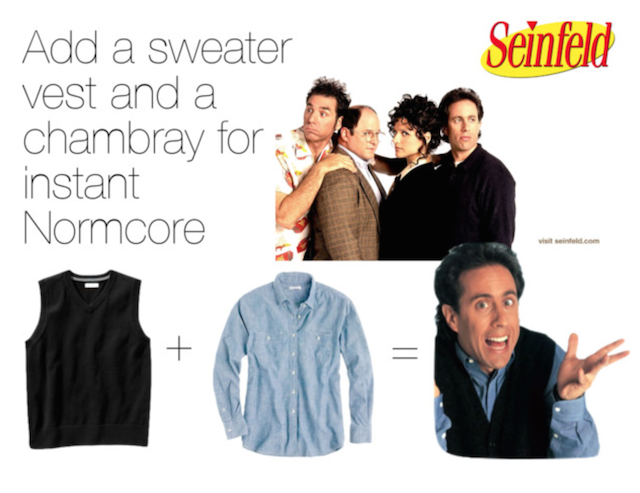