The sense of foreboding begins well before stepping into the Hotel Carter’s lobby. It starts with a Google search.

The hotel, in its impressive 84 years of existence, has taken on somewhat of a mythic place in New York City lore. But with the pervasiveness of Yelp and TripAdvisor, what was once an urban legend is now documented online for anyone to see, anywhere in the world. Reading a few of the user reviews are enough to make your stomach churn, not compel you to book a room.

Despite this, there is a steady stream of guests coming and going through the hotel’s lobby doors. Of course, the rooms are cheap, and the location desirable, but there are other hotel options, and ones that won’t give you bedbugs. So with the Carter’s reputation having almost superseded itself, who are these souls and why are they there?

Sitting in the Carter’s lobby is a trip in itself–much like neighboring Times Square, you’ll first observe the fascinating cross-section of people. But, also like Times Square, there is a sometimes sinister undertone. On one recent visit, the Observer noticed a woman crying in the corner. The entire scene is straight out of the 1970s thanks to faux-leather couches, faux-marble columns, faux-wood tables, and a mirrored ceiling.

“I’m Clem and this is Jack, my boyfriend. We’re from England. This is our first time in New York,” a young woman told the Observer one morning in the lobby. Clem was applying under-eye concealer–neither had received the best night’s sleep.

The couple said they were on a tight budget, and with the airfare being more expensive than expected, accommodation became the last priority. One fateful Google search– “cheap hotel Times Square”– led them to the Carter’s Hotels.com page. In their haste, they booked a room for $159 a night without reading any reviews. Only days before they left did Clem read the TripAdvisor page.

Clem and Jack told us their bathroom was “horrendous,” and that the carpet did not appear to have been vacuumed in a very long time. The curtains were dusty, the TV did not work, and there was no toilet paper in the bathroom. They had to go to the front desk themselves to pick up a roll.

“I guess the plan is to spend as little time here as possible,” said Jack glumly. “We’re going to the park today. That’s all we know.”

“I actually read those reviews online,” a woman who wished to remain unnamed told us one evening in the lobby. She was visiting from Louisiana for a brief business trip. “And I thought that people, you know, exaggerate online, try to be funny. Well, in the case of this place I guess I was sort of proven wrong.”

She told us of dirty bed sheets and brown bathroom tiles. Like Clem and Jack, she too was indignant about having to fetch her own toilet paper.

“It’s really not that bad, though” she conceded. “It’s cheap is what it is.”

For others, like brothers J.R. and Anthony from Buffalo, New York, staying at the Carter is a source of pride.

“This is our fourth time? No, fifth time here. And I’ll tell you, we’ll come back,” J.R. said while trying to hail a cab outside the hotel, suitcases at his feet. “We’ve had to come in to visit our father, who’s old now. And he tells us about the ‘old New York’ where you could get a room, no questions asked. And this is it! This is old New York! We love the rats!”

The brothers told us whenever they post pictures of their room on Instagram–which, they admit, is neither clean nor comfortable–they get an inordinate amounts of ‘likes.’

However, perhaps our strangest encounter with a patron came from a woman named Helen one evening in the lobby.

“This is my first time here and it’s lovely, really lovely,” Helen said. “My room was clean as could be. So was the bathroom.”

Was she aware of the Carter’s reputation? Had she read the reviews online?

“No–I had no idea! People are so picky nowadays,” she said with a laugh. “I’d definitely come back.”

A peculiar sheen filled her eyes as she told us of her super-quiet room, the high speed Internet, the food left by housekeeping–despite the fact housekeeping never leaves food. (When we asked the man at the front desk if the hotel ever left complimentary treats he simply laughed.)

So what’s to make of all this? It seems most guests were misinformed. Had they spent time perusing the TripAdvisor or Yelp reviews they would have probably reconsidered choosing the Carter. Many told us they had been swayed by the comparatively attractive professional photos shown on the Carter’s website, and their Hotels.com page. Some others are lured by the romanticism of a place where time stands still.

All we know is that finally stepping out of the Carter, into the sunlit 43rd street, then through Times Square, where the din of voices rises around you like a protective mist, is the closest we’ve ever come to a religious experience. We couldn’t get away fast enough. 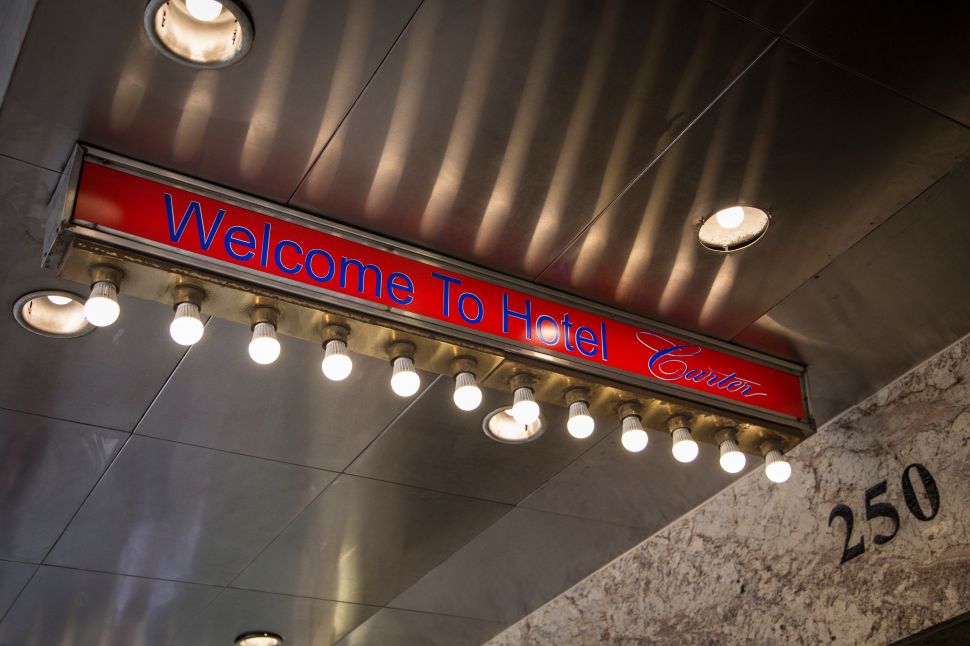