There’s a new wild man out on the streets. You can find him at your nearest CrossFit gym, doing jerks and cleans and afterwards instagramming a sweaty selfie with the hashtag #WOD (workout of the day). Catch him devouring wild boar and wild elk meat loaf with a side of rustic root vegetable mash for lunch at Hu Kitchen. Early morning, that’s him “barefoot” running (in Vibram FiveFingers shoes) in Central Park. At the bar, he’ll be putting back Strongbow hard cider and maybe tequila (it’s natural, it’s from the agave plant!) if he’s in for a crazy night.

If you want to know how he got to look and feel the way he does, just ask, he’ll tell you all about his transformation, and encourage you to join along. Two words: CrossFit and Paleo.

The diet—nay, lifestyle!—and workout are nothing new, but have been growing in popularity to the point that it seems every fit specimen you encounter is plugged in to the cult of functional movement fueled by hunter-gatherer sustenance. While CrossFit first emerged on the West Coast in 2000, you can now find one in nearly every neighborhood across Manhattan and increasingly in Brooklyn as well. There are plenty of reasons why CrossFit and Paleo co-mingle so well, but the mainline is they both represent life hacks. Paleo appeals to the kind of guy who has “better things to do than count calories,” in the words of one of the major players, NYC-based John Durant, author of The Paleo Manifesto. Instead, he can heap on a well-balanced meal of meat, veggies, carbs by way of roots and tubers, nuts, and burn fat without going hungry. At CrossFit, he can work out for an hour less, and fewer days a week, but because of the high intensity of the workout, burn much more and build more muscle than in the hours and days, hell, years, he spent lifting at a typical globo gym.

They even hack the diet. Ask anybody who’s practicing Paleo how strict he is, and he will qualify in percentages, says Juri Henley-Cohn, a 36-year-old actor who works out at Williamsburg’s CrossFit Virtuosity. “I’m 100 percent Paleo 70 percent of the time. My wife got a chocolate chip cookie the other day, and I ate some of it. I drank beer over the weekend.” Even Mr. Durant modifies it: “I’m about 85 percent. I flex on dairy. I eat some white rice. I definitely drink too much.”

Mr. Durant, bearded, blue-eyed, with shoulder-length curly brown hair, looks like a cross between Russell Brand and Jesus. He has a benign, liberal arts school Frisbee guy vibe, although he’s actually a Harvard alum who first got to thinking about an evolutionary framework for health and fitness while studying evolutionary psychology under Steven Pinker. He says NYC can be a great place to be Paleo. “People care a lot about food, and where it comes from. There’s pretty good farmer’s markets, and they’re easy to get to. It’s a walking city. Hunting is difficult,” he adds.

He knows the struggle, though. When Mr. Durant first moved to NYC fresh out of college, he worked long hours at a consulting firm, which meant he was sitting all day, rarely exercising and eating take-out that the company ordered on most late nights at the office. He gained 20 pounds, and he was exhausted all the time. “Humans aren’t adapted to sitting at desks all day long, eating Twinkies and drinking Pepsi,” he writes in The Paleo Manifesto. In September 2006, he started the Paleo diet. He lost 22 pounds. His complexion, which had seen the occasional stress-induced zit, cleared up. He went the whole winter without getting a single cold. He compares switching to Paleo as “waking up from a perpetual state of hangover.”

“Paleo” is short for the Paleolithic era, the period from 2.6 million years ago to 20,000 years ago when our ancestors were happy hunter-gatherers for their brief lives (average age 30) until they died from rotting gangrene or being mauled by a saber tooth tiger. But, significantly, none of them died from heart disease, diabetes, depression, obesity, or any other “diseases of civilization,” which didn’t crop up until 10,000 B.C., the dawn of agriculture. The argument is that from an evolutionary standpoint, life in the Paleolithic era is more our natural state, compared to the meager 10,000 years we’ve been eating grain and dairy, not nearly enough time to adapt, hence the spate of gluten and lactose intolerance.

While most nutritionists can get behind Paleo’s ban on processed foods and skepticism of our predominately sedentary lifestyle, some scientists call bullshit on its idealization of the hunter-gatherer era. Evolutionary biologist Marlene Zuk, author of Paleofantasy, challenges the idea that our ancestors got along swimmingly prior to agriculture, and that it’s been an evolutionary downhill slide since then. She terms this line of thinking “paleo-nostalgia.” In an article on Slate, she says, “It’s more helpful and accurate to see that all organisms are constantly evolving. There has been no point in our past when we were perfectly adapted to our environment.”

It’s all about what you can get away with, and what gets results. And what you can afford—who can spare an average of more than $200 a month on CrossFit, and shell out for grass-fed meat and organic produce?

Erik Owings, founder of NYC’s Mushin Mixed Martial Arts and all-around fitness expert, says that CrossFit appeals because “they made exercise into a form of competition, into a sport. There’s a whole generation of guys who were just exercising in gyms, reading Men’s Fitness or whatever, looking for an outlet or community they could express themselves with.”

You can certainly see that here, where gyms like CrossFit Virtuosity have an annual prom serving libations like #kindapaleo lemon basil gin punch and plantain chips, with members busting a move amid a backdrop of kettlebells and medicine balls. Gym-wide 30-day Paleo challenges encourage as much camaraderie as a round of sweaty high fives amongst those who beat their pr’s this WOD.

If you can afford it, that is. Ernie Costa, a 27-year-old finance guy, couldn’t. He got turned onto Paleo and CrossFit a year and a half ago while still living in his hometown of Belmar, New Jersey. Before his transformation “I was always the typical meathead, would go to the gym and bench and do arms, and go home and eat like four hamburgers. It was bad.” When he saw an ad about a CrossFit membership for $100/month with the first week free, he tried it out, and fell in love with the gym atmosphere, and the workouts. But nothing changed for him appearance-wise until one day a Paleo expert visited the gym, a kid his age and an ex-Marine, and he figured, “Fuck it. I’ve been the fat kid since I was 12 years old, and nothing has changed in 15 years.” He did the 30-day challenge and lost 25-30 pounds.

He felt like a completely different person. But when he moved to New York in November 2013, he struggled to find a CrossFit gym for less than $275/month. Coupled with NYC’s high cost of living, plus student loan debt, he quit CrossFit last month, and since has quit Paleo as well. “I get home at 9. By the time I get home, all produce is either purchased or rotten.” And he struggled to afford grass-fed and no GMO meat. “I can’t remember the last time I ate red meat—and I love red meat. I can’t barbecue anything here—I live in an apartment complex.”

Kettlebell Kitchen, a Paleo prepared meal service that delivers to CrossFit gyms throughout NYC, aims to address the difficulty of keeping the diet in the city. The meals, which include wild salmon and sweet potato cakes served with braised collard greens, marinated artichoke hearts and cilantro lime aioli, go for around $10-$13. Co-founder Andy Lopez, a blonde beefcake with hazel eyes and great arms, says with Kettlebell Kitchen, folks “can’t make excuses.”

As much fun as it is to imagine Fred Flintstone versions of modern day Paleo dudes, the caveman thing, it turns out, has little to do with it. There’s a subset that identifies as “Primal,” after Mark Sisson’s The Primal Blueprint, the reform to Paleo’s conservative, allowing red wine and dark chocolate for the antioxidants, and singing butter’s praises (big pro-fat crowd) even though our hunter-gatherer ancestors had no access to Land O’ Lakes. You’ll drive yourself crazy trying to interpret the rationale. Why is coffee kosher? Cavemen didn’t drink coffee. The main point seems to be that as far as the average guy who wants to get fit goes, Paleo is kind of easy. 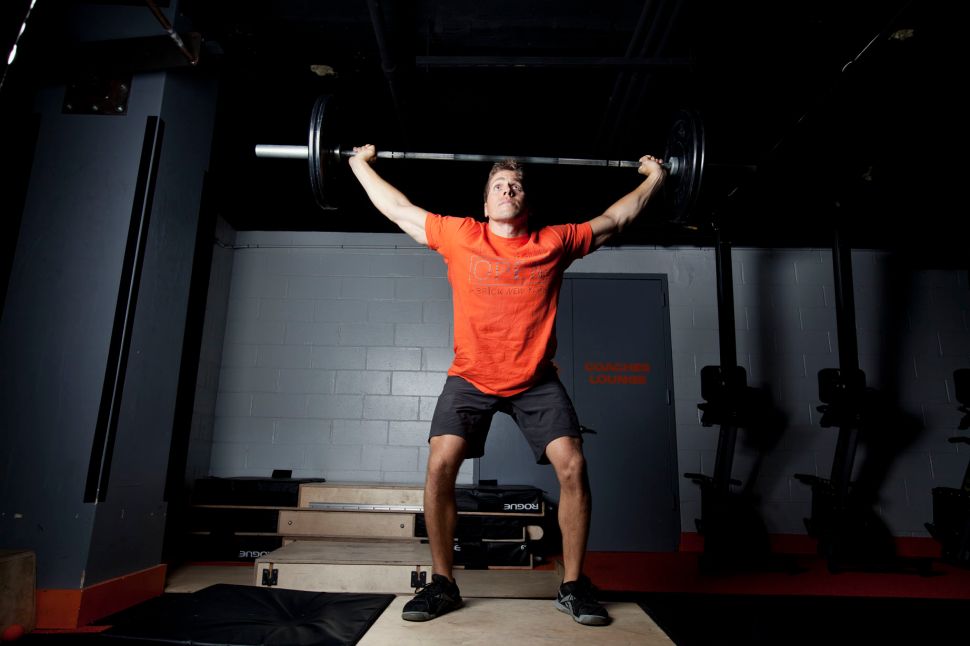