Ana Pincus has endured considerable hardship in the name of real estate, even by New York City standards. The wife of Henry Pincus and granddaughter-in-law of  private equity magnate Lionel, Ms. Pincus some years ago found herself the victim of a stalking campaign launched by the Jordanian Princess Firyal, the longtime companion of the elder Mr. Pincus, who seemed to hope that applying pressure to Henry and his brother Matthew might convince them to turn over the then-ailing patriarch’s $50 million Pierre Penthouse. Apparently mostly unscathed, Mr. and Ms. Pincus went on to buy cosmetic kingpin (or is it Queen-pin?) Laura Mercier’s Chelsea loft in 2008 and, perhaps vexed by that neighborhood’s lately amplified bustle, they are poised to head Downtown, having just purchased a $10.2 million townhouse at 311 West 4th Street, according to city records.

We can only hope that no one finds the new place stalker-worthy, though it certainly sports enviable credentials. Situated on a quiet-ish stretch, the 1840’s home is over 4,100 square feet, with five bedrooms, big windows, wood floors and, according to the Custom Brokers listing held by Eunice and Stephanie Turso, “lots of prewar details.” Folks no-doubt liked backyards before the war, and the house has a charming one, complete with greenery, flagstone patio and wooden trellis that stirs fond memories of suburban days. For all the home’s historic character, its interiors are clean and bright, possessed, in the listing photos, of what might be called a Restoration Hardware vibe.

Among the former owner’s many attractive decorative touches is a dining room wall hung with framed photographs, some of which might well have been taken by seller José Picayo, a pro who has shot for Harper’s Bazaar, Esquire the Times magazine and various illustrious others—as well as in the context of fancy artsy gallery-type work. But we certainly won’t rule out his wife Mary; all you need to be a photographer nowadays is an iPhone, right? (Just kidding, Mr. Picayo. We wouldn’t do that to you.) 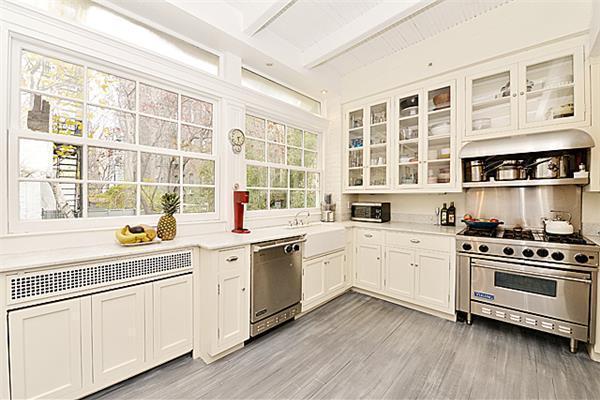