The current exhibit at the Upper East Side’s Jewish Museum, “Mel Bochner: Strong Language,” is one that in so many ways reflects New York life. Featuring strong, bold, conceptual art that is also painfully simple, the exhibit reflects the essence of New York. The city is a place where things are so often black and white – bold and alluring, iconic in their simplicity. And, further echoing this city where we always have noise, Mr. Bochner’s work explores words, language and their meanings. As Mr. Bochner noted, “contemporary language is used in ways that even George Orwell could not have imagined.”  Nowhere is that more true than New York City.

Mr. Bochner, whose first job upon arriving in NYC 50 years ago was as a security guard in the very institution in which he now exhibits (and, from which he was eventually fired for falling asleep on the job) exhibits paintings dominated by words, boldly framed to highlight how words can have so many different meanings. It’s a New York story, with 25 words used to describe “Going out Of Business,, including Calling It Quits, Lost Our Lease, and Everything Must Go. Is it real – or is the shop-owner trying to put one over on us?

Other enjoyable paintings on display include “Nothing,” “Useless,” “Contempt,” and “Obscene.”  Such strong art work is consistent with our strong city and a place where we constantly engage with language and her meaning.

In so many forms of every New Yorker’s life, words are the key to the art.  In New York, like in our newspaper headlines (Headless Body Found in Topless Bar) or in monologues like those in Spike Lee movies describing New York City in so much color, language matters. One of the most classic monologues ever in a New York movie is Ed Norton’s classic “Fuck You” rant in Lee’s 25th Hour. So simple, so offensive and says so much.

Mr. Bochner accurately notes that, “Language determines so much of not only what we see, but how we see it.” He uses bold colors and in today’s world, with tweets, texts, pop-up ads and more, is any language ever simple or is it just a lot of noise?

One of the first pieces on display consists of simple black letters with the writing “Language Is Not Transparent.” True or not? Pick-up artists, street hustlers, police officers and Columbia University professors would have ample debates on that very topic.

A cute piece was “The Joys of Yiddish,” featuring Yiddish words that have become part of everyday vernacular. Is there a cab driver, police officer or other New Yorker who does not know the Yiddish words on display – mensch, schmooze, shmo and nudnik? As anyone who’s hired Schleppers to move across town knows, Jews have become such a part of American culture.

The commencement of the exhibit – dominating the entrance – is “Blah Blah Blah”, depicting Mr. Bochner’s fascination with language and words’ meanings. As one who makes his living from language, “blah blah blah” describes much of what I do. Yet, in personal and professional relationships, as in so many other aspects of life, words matter. And, so many of us New Yorkers close our front doors so often feeling the sentiment noted by a piece on display: “Everybody is Full of Shit.”

Words touch our emotions, intellect and more. Mr. Bochner’s exhibition left me wondering if a picture is really worth a thousand words. 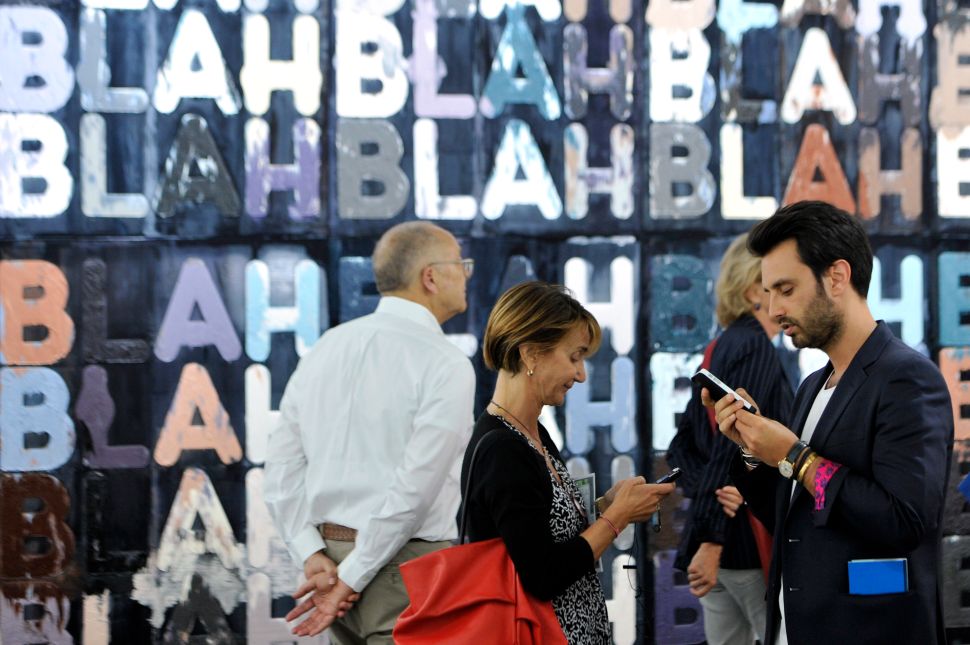