Can a commercial business leave such an impact it earns its own epitaph?

The Center for Art Law newsletter this month featured a detailed obituary of Knoedler Gallery, a history of the 160-year-old business told through its appearances in courts, and in court documents, around the world and through the centuries.  It illustrates that, surprisingly, the gallery’s frequent 21st-century battles in court were far from new or isolated events.

The gallery, which played a central role influencing decades of collectors and collections, has been involved in a handful of important lawsuits throughout its history, New York art lawyer Irina Tarsis argues. Select cases even “map a footprint the Gallery left on the American legal history.”

“A tour through the annals of case law… uncovers many a Knoedler references, from matters under review by the United States Tax Court to illegal wire-tapping hearings, from the United States Customs Court citations to nineteenth-century unfair competition conflicts, from World War II looted art to Soviet nationalization title disputes, from warranty breaches to racketeering, and fraud,” notes Tarsis.

The gallery was founded in 1848 by Michael Knoedler and members of a French firm, Goupil, Vibert & Cie (one of the first lawsuits, btw, was over rights to the name), then it was acquired by Armand Hammer in 1971. It collapsed in 2011 amid an avalanche of lawsuits — perhaps more than ever filed against any gallery in the modern age save Salander O’Reilly, Tarsis notes — charging fraud.

Among the lawsuits highlighted in the 3,000-word history are the gallery’s 1919 dispute over customs duties assessed on a Rodin sculpture being brought into New York. (At the time, the Rodin was valued at 12,000 francs). Knoedler won. A trio of assessors ruled that Rodin was a professional sculptor of high order thus the bronze statue was an ‘original’ and not subject to a 15% fee.

The obituary was initially published in 2013 in Entertainment, Arts and Sports Law Journal, but was updated and republished earlier this month in the Center for Art Law newsletter.

What is worth emphasizing, Tarsis concludes, “is that this venerable Gallery will more likely be remembered for its avant-garde aesthetic and the authentic gems it dealt in rather than the fakes and legal disputes that marred its last chapter… The Gallery’s legacy is larger” than its lawsuits. 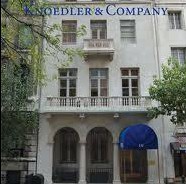