“Back in the Fifties, Tennessee Williams put the South in the center of the American stage. Now Preston Jones threatens to do the same with the Southwest.”—R. H. Gardner, The Baltimore Sun, 1976

“Texas has spawned a writer who just might turn out to be another O’Neill.”— Bruce Cook, Saturday Review, 1976

They say that death comes in threes, and this was certainly true of A Texas Trilogy. It arrived on Broadway in September 1976 with a robust pulse from a trail of critical rose petals like the ones to the left. Its novice author, Preston Jones, was led into the Broadhurst like a trusting Caesar into the Forum and summarily whittled down to size by the New York critical fraternity.

The Oldest Living Graduate lingered for 20 performances, Lu Ann Hampton Laverty Oberlander for 21 and The Last Meeting of the Knights of the White Magnolia for 22.

“A classic case of Broadway oversell followed by overkill,” ruled Mel Gussow in The New York Times. Furthermore, in his book, Theater on the Edge, the critic attributed the show’s death to acute regionalism: “It was Mr. Jones’s fate to be categorized—and diminished—as a regional playwright. The word ‘regional,’ as applied to theaters as well as playwrights, is generally considered to be pejorative. In popular usage, it not only means local, but limited, and even rural. . . . An important question is whether a play moves beyond its source or remains landlocked in an insular enclave.”

Regionally, Mr. Jones’ playpen was the American Southwest. He spent most of his adult life in the employ of the Dallas Theater Center—in a variety of theatrical roles: actor, director, stage manager and, when needed, ticket-taker. In 1972, when he became DTC’s No. 2 man and managing director of its down stage center, he added playwriting to his list of talents. A Texas Trilogy was born—out of necessity—not with the notion of creating an American Shakespeare but with the less lofty goal of filling out the season with original regional plays. It wound up selling out the season and causing such a sensation that New York could hear it.

All three plays are currently twirling in rep through August 24 in what could charitably be called their first New York revivals. The instigator is The ReGroup Theatre Company—specifically, its artistic director, Allie Mulholland, who is staging the pieces in a newly renovated space: the second floor of McAlpin Hall at Amsterdam and 86th. ReGroup is one of three troupes in town (along with The Mint Theater Company and Unsung Musicals) that proudly parade oldies-but-goodies, mining lost or forgotten nuggets for modern audiences. ReGroup’s forte has been a series called Reclaiming Names, which spotlights the works of playwrights from Hollywood’s blacklist era.

Mr. Mulholland learned of these playwrights from the memoirs of Audrey Wood, the legendary agent who jump-started the careers of Tennessee Williams, William Inge, Arthur Kopit, Carson McCullers, Murray Schisgal, Robert Anderson—and Preston Jones. Recognizing a comparable greatness in Jones’ writing, she elected herself his handmaiden to Broadway and made sure the playwright and Texas Trilogy traveled first-class, securing a prestigious pair of producers (Robert Whitehead and Roger L. Stevens) and the director of the original Who’s Afraid of Virginia Woolf? (Alan Schneider).

When we met in 1976 in The Blue Bar of The Algonquin before the opening, the playwright batted back the foolish notion that imminent success would, in any way, uproot him from his comfortable slot at the Dallas Theater Center. In fact, he was anxious to get back to his tomato patch.

The extraordinarily rhapsodic reviews his Trilogy had received during its pre-Broadway tryout at the Kennedy Center’s Eisenhower Theater didn’t turn his head. He had the look and bearing of a thoroughly grounded character actor, and the role he played throughout the New York previews was that of “good ol’ boy,” steadfastly refusing to get caught up in the emotional commotion around him.

It was a blessing that Mr. Jones wasn’t a Broadway believer. His plays flat-lined without a bleep before the Brit who reviewed them for The New York Times. “Each play is oddly inconclusive,” wrote Clive Barnes. “There seems to be no statement, no purpose.” Other critics were equally underwhelmed.

A Texas Trilogy was not Tony enough for the Tony Awards, of course, but those fair-minded miscreants at the Drama Desk voted it the Best American Play(s) of the season and named Mr. Schneider the Best Director. Diane Ladd as the luckless Lu Ann was nominated, as was Fred Gwynne, the erstwhile Herman Munster and Big Daddy Pollitt playing the cranky Colonel Kinkaid, a local money-bags who figures in two of the plays.

Mr. Jones returned to Texas and that tomato patch even before the plays closed and continued his theatrical multitasking at the Dallas Theater Center. He wrote three more plays, all of which were set in his home state of—wait for it!—New Mexico. (His father, J. B. “Jawbone” Jones, had once been lieutenant governor of that state.)

Three years later, he was about to appear as the Duke of Norfolk in a DTC production of A Man for All Seasons when he suddenly fell ill. On September 9, 1979, the man who would be “the next Miller/Williams/O’Neill” died after surgery on a bleeding ulcer. He was 43 years old. 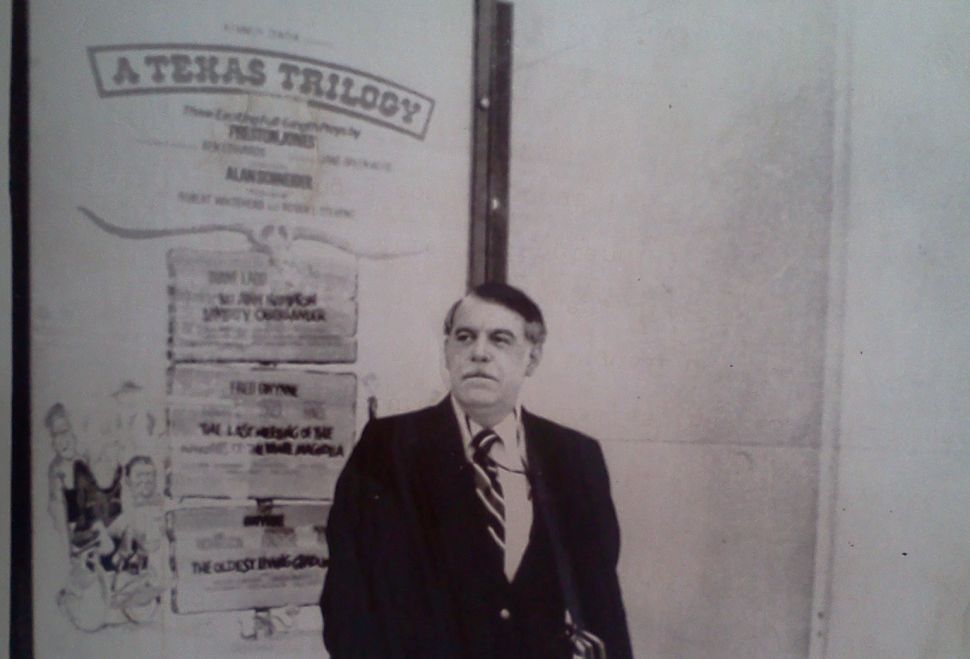