Mayor Bill de Blasio pledged to eradicate the tale of two cities, but if his public schedule is any indication, he may be creating a tale of two boroughs.

The proud Democrat, openly disdainful of the right wing of American politics, has rarely held public events in neighborhoods that favored his Republican rival last fall, an Observer review of Mr. de Blasio’s public schedules show. Mr. de Blasio captured the mayoralty with the greatest landslide in a generation, but the few areas that supported Republican Joseph Lhota have not been lavished with attention.

Of the 10 Assembly Districts Mr. de Blasio lost to Mr. Lhota–he won a whopping 55–four rope in portions of southern Brooklyn. All are white majority districts.

“Last year during the mayoral primary he came out this way because he had support from the Bay Ridge Democrats. Since then, you haven’t seen much of him,” said Jerry Kassar, the chair of the Brooklyn Conservative Party and a Bay Ridge resident. “I just assume that in the early days of his administration, he’d spend time in places he felt his message would be endorsed rather than criticized.”

On Monday, he spoke at Wingate Park in Flatbush. Last Thursday, he was touting rising test scores in Bedford-Stuyvesant.

When Mr. de Blasio does venture to southern Brooklyn, he appears to prefer friendly territory. A de Blasio spokesman pointed out that he held a July press conference in Canarsie, though the neighborhood is dominated by minority voters who–as polling data confirms–favor Mr. de Blasio far more than white voters residing in other southern Brooklyn enclaves.

This past Sunday, Mr. de Blasio attended a Pakistani independence parade in Coney Island, the first mayor to do so in 20 years, the de Blasio spokesman also noted. Coney Island, though, is still a safe haven for the mayor: residents reliably vote Democrat, unlike their neighbors in Brighton Beach and Sheepshead Bay, where “Democrats Destroy America” can be found scrawled on the wall of a Sheepshead Bay Road underpass. Beyond a fund-raiser and private meeting with the local State Senator, Simcha Felder, Mr. de Blasio has also entirely avoided Boro Park, the conservative Orthodox Jewish enclave.

“It’s natural for all politicians to reinforce their base. Of all the things that can happen in politics, conversion is the least likely to happen,” said Kenneth Sherrill, a professor emeritus of political science at Hunter College. “You don’t want to be yelled at when you get to these events.”

“There’s no question this mayor and his team have their ears to the ground out here,” said Justin Brannan, the president of the Bay Ridge Democrats, a club that supported Mr. de Blasio last year. “I’ve yet to raise an issue they didn’t immediately respond to.”

In Queens, Mr. de Blasio has not publicly visited Breezy Point, Howard Beach and Broad Channel since becoming mayor, areas dominated by white conservative voters. On the Upper East Side–a chunk of Manhattan that Mr. de Blasio could not capture in the primary or general elections–Mr. de Blasio, excepting his Gracie Mansion receptions, closed door meetings with elected officials and an impromptu visit after a January snow storm, has rarely been seen. Mr. Lhota won all of the Assembly Districts encompassing those neighborhoods.

But Mr. Lhota, mellowed from a bitter campaign against Mr. de Blasio, still thinks the new mayor is paying enough attention to the people beyond his Democratic base.

“You can only be in so many places at once,” Mr. Lhota told the Observer. “He should be about governance, not about politics.” 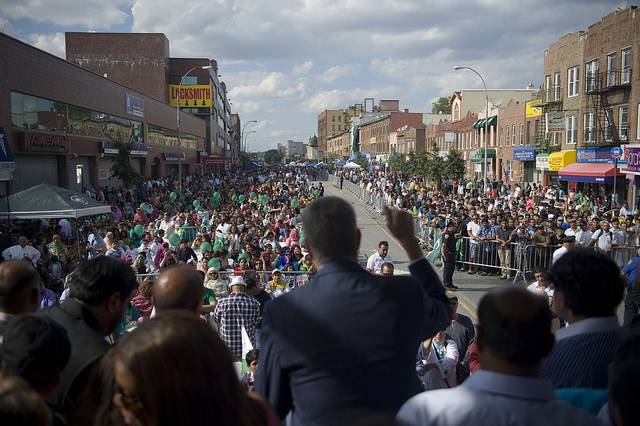