Being a wife, mother and international media-mix can’t be easy, but Cate Blanchett insists that it’s easier than you’d think. “I find that stage work can be great if one is working in film—and vice versa,” said the actress who’s a whirling dervish at both and still, somehow, manages to keep the home fires burning Down Under.

Home is Sydney, Australia, and that faraway place hasn’t held her career back a whit. “Why would it?” she shrugged. “There are clichés about Australia, but every time a work of ours—whether a theater piece or an art exhibit—tours the states, I think that sense of cultural diplomacy helps to break down those kinds of clichés.”

As leading player (and export) of the Sydney Theatre Company, she’s doing her part to lead that charge, circling the globe in assorted classical disguises: Hedda Gabler, Blanche DuBois and that ravishing in-law of Uncle Vanya’s, Yelena Serebryakov.

For this summer’s Lincoln Center Festival at New York City Center, she’s lowering her station (if not her artistic sights) and showing up as domestic help. From August 6 to August 16, she and Isabelle Huppert will be The Maids, playing an intense, elegantly perverse game of class-crossing dress-up, which director Benedict Andrews and Ms. Blanchett’s husband, playwright Andrew Upton, adapted from the Jean Genet play.

It’s a kinky clash of classes—sort of a deadly “Upstairs/Downstairs” power-play, all contained within a posh Parisian bedroom where two sisters, Claire (Ms. Blanchett) and Solange (Ms. Huppert), lock horns with their sadistic, self-absorbed Madame (Elizabeth Debicki, who was Jordan Baker in Baz Luhrmann’s 2013 remake of The Great Gatsby).

Genet’s 1947 opus is his eccentric rehash of a grisly 1933 murder case where sisters Lea and Christine Papin killed their employer and her daughter in Le Mans.

Given the disparity between Ms. Blanchett’s Australian accent and Ms. Huppert’s French one, you won’t take them for actual kin—nor should you, said Ms. Blanchett. “It’s an elliptical, labyrinthine play, and we’re exploring the ellipsis in the play, so we’re sisters in an abstract sense. That’s just the outer surface of the play, there to be played with. We talked at one point about swapping roles. We also talked about whether, at a certain point, we might fall into French. We played around with those things and with those concepts, but ultimately we decided not to pursue them. It’s a bit like throwing mud on the wall and seeing what sticks. Those ideas didn’t stick.

“When I pick a play, the point of intersection is usually the people who are to be in the room. The character I’m to play is almost always the last point of entry for me. I’ve some addiction to the adrenaline of entering the rehearsal room and not having a clue how the character or the play will unfold. Certainly, that’s true of The Maids.”

This production came together at the Paris stop of a long European tour of Botho Strauss’ Gross und Klein (Big and Small). Ms. Blanchett, her husband and director Mr. Andrews looked up Ms. Huppert, and the four went into a huddle about what they could do together. The Maids came up quickly and pretty much never went away.

“There’s an elasticity to this play that is ripe for reconfiguration. Theater is a very elastic medium—very porous. It’s a bastard form, capable of having a lot thrown at it. That’s what happens in rehearsal. That’s the way I’ve worked with Benedict in the past. He and Andrew wanted to bring out the real and present danger in this play.”

In her view, The Maids represents a different and deeper step for the Sydney Theater Company. “What I love about this production is that people who saw our Streetcar, Vanya and Hedda Gabler say it shows off a new aspect of the company.”

Any of the above could have played Broadway with comfortable critical acceptance, but that won’t happen for at least another decade. “It’s not that I wouldn’t want to,” she admitted. “It’s just that even a limited run, which Broadway would require, would not be possible.” She feels the home ties tugging her back to Sydney, where she and her husband raise their three sons (all bearing names that weren’t casually arrived at: Ignatius Martin Upton, 6; Roman Robert Upton, 10; and Dashiell John Upton, 12).

The Brooklyn Academy of Music hosted the first two imports of the Sydney Theatre Company, Hedda Gabler and A Streetcar Named Desire. As movingly reblocked by Liv Ullmann, Tennessee Williams’ play had Blanche/Ms. Blanchett, rather than be escorted off stage by a kind stranger, wander off befogged like Ms. Blanchett’s character in Blue Jasmine.

It’s within the realm of possibility that Woody Allen caught this and was inspired to write a role mixing DuBois genes with Madoff genes. Whatever. It got her the Oscar.

That was Oscar No. 2. Her first was also won the hard way: projecting a completely convincing Katharine Hepburn (circa her Howard Hughes period) in The Aviator.

Despite the Oscars and the hyperactive film career, she still snags her share of box-office flicks (notably, the Hobbit series, Indiana Jones and the Kingdom of the Crystal Skull and How to Train Your Dragon 2).

Between the premiere of The Maids and its opening here, she managed to squeeze in another movie: Carol, opposite Rooney Mara, Sarah Paulson and Kyle Chandler. It’s based on a Patricia Highsmith mystery, first published under the title of The Price of Salt. Todd Haynes, who directed Ms. Blanchett’s Bob Dylan in I’m Not There, helms.

“Strangely, and coincidentally, when we were first performing The Maids and I told Todd about it, he emailed me a photograph of him from when he was in university and playing Salonge in an all-male production of The Maids,” Ms. Blanchett said. 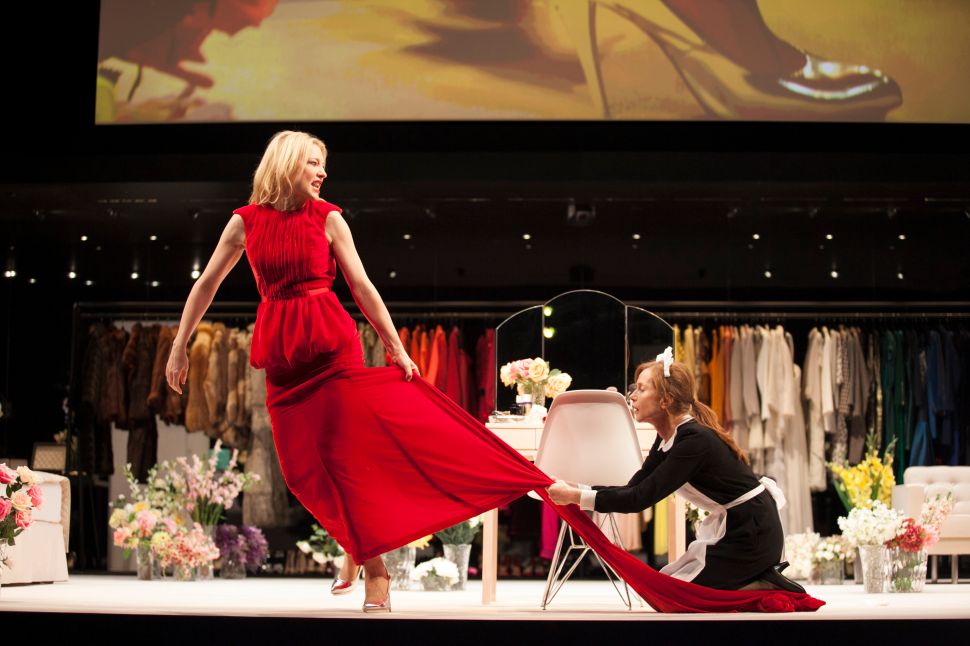