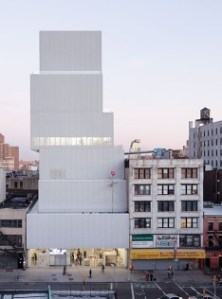 Thanks to a hefty $500,000 gift from the Andrew W. Mellon Foundation, the New Museum has announced it will create a new position of Research Fellow, a two-year postgraduate position that will work across disciplines in the museum. The funding also goes toward a partnership between MIT Press that will produce the Critical Anthology Series.

New York, NY… Lisa Phillips, Toby Devan Lewis Director, today announced three major new scholarship initiatives at the New Museum. The Museum, which has always been at the forefront of artistic inquiry and experimentation, is an ideal place to conduct scholarship in contemporary art. Thoughtful and incisive platforms for discussion and debate around contemporary culture are a founding principal of the New Museum’s mission. As the field, community, and audience for contemporary art continues to expand exponentially, geographically, and demographically, the need for scholarship has never been greater and the Museum is rededicating itself to this core purpose.

MELLON GRANT FOR SCHOLARSHIP IN CONTEMPORARY ART
The Andrew W. Mellon Foundation has awarded the New Museum a $500,000 grant to expand scholarship on emerging art and ideas. Awarded over three years, the grant will support the special position of Research Fellow and make possible a combination of public and private seminars advancing research around new and evolving issues in contemporary art. The Mellon grant will also help support the relaunch of the Museum’s seminal Critical Anthology Series, which presents cultural debates and interdisciplinary discussions around timely and urgent topics in contemporary art.

The Research Fellow is a full-time, two-year rotating position for a postgraduate or predoctoral candidate working across the Curatorial and Education departments led by Massimiliano Gioni, Artistic Director, and Johanna Burton, Keith Haring Director and Curator of Education and Public Engagement. Encouraging dedicated concentration on research and scholarship, the position provides an invaluable opportunity for emerging young scholars to collaborate with and learn from seasoned academics and the Museum’s full curatorial team.

“Major funding from the Andrew W. Mellon Foundation will help fuel a big leap in contemporary art scholarship,” said Lisa Phillips. “The Foundation’s support previously enabled us to launch our Digital Archive, a groundbreaking record of the Museum’s thirty-seven year programmatic history. With this new award, we will be able to relaunch our historically important publication series under the editorial leadership of Johanna Burton, and strengthen the New Museum’s position as a site of learning, teaching, and research.”

CRITICAL ANTHOLOGY SERIES WITH MIT PRESS
The New Museum and MIT Press are pleased to announce the relaunch of a publication series initiated in 1984 and active until 2004, which produced six defining volumes for the field of contemporary art that quickly became essential academic resources. Among these groundbreaking publications were Art After Modernism, Blasted Allegories, and Out There: International Perspectives on Art and Culture, all of which helped frame and define the discourse of art at the time. The relaunched series will build on this historic partnership and reinvigorate the conversation around contemporary culture once again. The books, intended as key classroom tools and resources for anyone interested in contemporary art, will serve as platforms for emerging ideas and productive, original, risk-taking debates. They will be developed through research and new scholarship produced at the New Museum via artist and scholar residencies, the Museum’s seminar series, intensive think tanks, and public conferences. Johanna Burton is the Series Editor. The first volume will be Mass Effect: Art and the Internet in the Twenty-First Century, coedited by Lauren Cornell and Ed Halter. As a series, the books will offer a platform for discussion in real time and will become historical records of now-emerging ideas.

“For twenty years, the MIT Press and the New Museum collaborated on a series of critical anthologies that significantly raised the level and intensity of discourse about contemporary art. Ten years after publishing the last volume, the MIT Press and the New Museum are excited to establish a publishing partnership again—not picking up where we left off, but engaging a very different set of urgencies and challenges that perplex the making and meaning of art in the twenty-first century,” said Roger L. Conover, Executive Editor, MIT Press.

MX CURATORIAL TRAVEL FUND
The New Museum also has announced the creation of the MX Curatorial Travel Fund, in honor of Massimiliano Gioni, the Museum’s Artistic Director. Over $300,000 has been contributed by a group of Trustees for this special fund, which will enable the Museum’s curators to expand their research around the world to better serve its global mission and development of its expanding international network of colleagues and artists.

Over the past five years, the New Museum has exhibited over 540 international artists from more than seventy-six countries. Its international research has already been crucial to the development of “The Generational Triennial,” the Museum as Hub, and such influential thematic exhibitions as “Ostalgia,” “Ghosts in the Machine,” and “Here and Elsewhere,” a survey of contemporary art from and about the Arab world currently on view throughout the Museum’s building on the Bowery. The MX Curatorial Travel Fund will provide crucial opportunities for curators to further contemporary art scholarship that complements and enhances the research and development supported by the Andrew W. Mellon grant.