While a City Council committee considered legislation aimed at reforming the use of solitary confinement at Rikers Island this morning, soon-to-be city correction officers marched down the aisles of a Queens auditorium to start careers that would likely send them to work in the jail complex.

“It’s very easy to view this agency in a negative way, if all you know about us is what you read in the press,” new Department of Correction Commissioner Joseph Ponte told the graduates and officers being promoted at the ceremony at York College. “The majority of our staff are committed to the agency’s goals and perform their duties in a professional manner, day in and day out, under very difficult circumstances.”

At the first graduation ceremony since Mr. Ponte joined the department in April, it was no secret that the department has been under fire—in the press, with elected officials and from U.S. Attorney Preet Bharara—as Mr. Ponte and union leaders sought to defend the department’s reputation.

The department has been hit by controversy after controversy in recent months — the death of a veteran in an overheated cell, a lengthy New York Times story alleging widespread abuse of mentally ill inmates, Mr. Bharara’s more than 70-page report saying Rikers Island had a “culture of violence” toward adolescent inmates, and a lawsuit alleging a young man died of a heart condition alone after officers would not take him to the hospital. This morning, just a few hours before the graduation, Comptroller Scott Stringer released information showing a sharp rise in legal claims filed against the department.

But at the happy occasion for a new class of officers Wednesday, Mr. Ponte and union leaders sought to highlight the work of good officers and push back against the media coverage of the problems on Rikers Island. Mr. Ponte offered stories of correction officers saving an inmate who was trying to hang himself, and of one officer who put herself between an inmate and the 15 other inmates attacking him — one of whom was armed.

“You didn’t read about any one of those events in the media. They happen every day in this agency and these officers do us proud,” Mr. Ponte said.

But Mr. Ponte also spoke about making changes to the department — calling training officers his “highest priority” since starting the job. So far, he said, the agency has been studying better ways to deal with adolescent inmates — and uses of force against them dropped from 31 in April to 19 in June.

“Change starts with the individual, not the agency, so we all need to look at ourselves and what we need to change for the department to change,” Mr. Ponte said. “You will have our full support to do what is right and not just to meet expectations but to exceed them.”

The class of 141 new officers is the first to graduate under the de Blasio Administration, and received new training focused on working with mentally ill inmates — who make up about 40 percent of the city’s jail population, according to Corrections.

Perhaps unsurprisingly, the union representatives who spoke at the graduation took stronger aim at the media coverage of their officers than Mr. Ponte’s even-handed remarks.

Mr. Seabrook said the department was a force of professional law enforcement officers, no matter what the media, observers and “individual investigatory bodies” may claim.

“At the end of the day our job is care, custody and control, that’s it,” he said. “Our job is not to abuse anybody, to beat anybody, to stomp anybody out.”

But at the small graduation and promotion ceremony, not attended by Mayor Bill de Blasio or any major city officials beyond the new commissioner, Mr. Seabrook also told the new officers they’d never get the glory of police officers or firefighters.

“Correction officers are out of sight, out of mind. They work with every single person that you read about in the newspaper that allegedly did something wrong, and these people are murderers, rapists, arsonists. These people are charged with crimes that, humanity doesn’t even want them in society. But the men and women that do this job don’t get the recognition that they so rightfully deserve,” Mr. Seabrook said.

The fiery union head has been knocked for his strong defense of his members in recent weeks. Councilman Daniel Dromm — who is spearheading the bill, passed out of committee during the graduation ceremony and up for vote tomorrow, that would require Rikers to report how often solitary confinement is used and on whom — recently blasted Mr. Seabrook for engaging in a shouting match him during a tour of the jail complex.

But Mr. Seabrook — who, also told Health Commissioner Dr. Mary Bassett during a tour she’d soil herself if left alone in the jail, according to the Times — said he would not stop rising to the defense of correction officers.

“You’re going to have to keep criticizing me, because I’m going to keep defending them until the last breath in my body,” Mr. Seabrook promised.

And Corrections Captains’ Association President Patrick Ferraiuolo — who said he wasn’t originally slated to speak at the graduation but felt it necessary given the department’s bad press — rejected the notion that the city’s jail system was broken.

“Although Commissioner Ponte said that we need to fix or change — we do, because nothing is ever at its best — but we were never really broke,” Mr. Ferraiuolo said. “We were just like Norman said, the forgotten ones. I know that we do, day-in and day-out on Rikers Island. I know what our job is.” 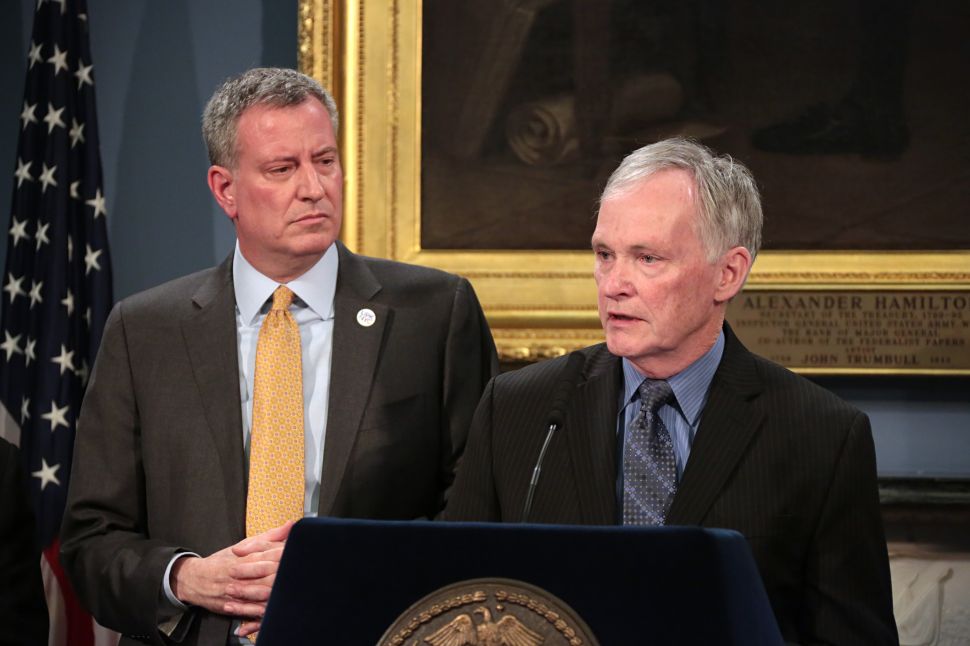