Don Katz, founder and CEO of the audiobook publisher Audible, wrote an email to the company’s employees about Robin Williams, who was instrumental to Audible’s success. It is reprinted below with permission.

Audible lost a member of the family yesterday, and I want to take a moment to remember.

Robin Williams created our first original program, a biweekly talk show that we cooked up over the course of a day in his living room in San Francisco. I was sore the next day from laughing, as he trained his singularly powerful mind on the idea of changing the world of listening. “In their ears! In their @#$#$ ears!” he barked when he phoned his mentor, the great Jonathan Winters, to ask what he thought of the idea of Robin joining the Audible adventure. “It’ll be just me inside their brains!” It turned out that Robin loved emergent technologies, and he shared our belief that technology could change a culture. He went on to not only invest money in Audible in 1999, but for several years after that, he consistently showed up to try to help us explain to others that Audible was born to transform what people could do “when your eyes are busy but your mind is free” … as we used to say back then.

Robin appeared on all of the morning talk shows for Audible in early 2000 – on Entertainment Tonight, on Letterman and many other shows too. He would hold up the original Audible MobilePlayer we invented and talk about the future and his new Audible show. Dave and the other hosts—not unlike just about everyone else back then—tried to understand what in the world Robin was talking about. Robin accompanied us to the Consumer Electronics Show in Las Vegas to host an Audible party and other events, and he walked the floors at the show like a manic pied piper, machine gun streams of outrageous synapse-quick verbal brilliance pouring from him without pause. He literally leapt into our post-IPO closing dinner in New York and bounced around talking trash about the Credit Suisse bankers in the room and implying that it didn’t matter what he said about them because they surely only spoke French. He so completely skewered institutional investors on our behalf at a conference in Arizona some weeks later, that making fun of the money culture riding the first internet wave became a part of his comedic repertoire.

Beyond putting his own cash into our way-too-early-for-prime-time dream, Robin did his show for us for several years, deploying his deep intellect and curiosity while hosting guests like George Lucas, Mario Cuomo, Bonnie Raitt, Harvey Fierstein, and Oliver Sachs, and though he’d recently turned down $20 million to represent a consumer product and earned just about that much per movie, we paid him in Audible warrants. When the internet economy fell apart in the spring of 2000, those warrants became worthless, and yet he never once stopped delivering his show, and I only heard him complain once. We were appearing together on a talk show Candice Bergen used to host. At the time, the entire company was worth less than the valuation ascribed to our patent portfolio. Robin leapt out of his chair, charged the nearest camera, and pointed at me. “Don Katz paid me in Confederate currency!” he bellowed. Then he started making shoveling motions and singing an impromptu song clearly intended to simulate that of a slave working in the fields: “Hooo Ah bin a-workin’ for Audible…”

We survived the destruction that took out most internet companies at that time, and by the end of 2003 when the Audible-compatible iPod was flying into listeners’ hands, I actually allowed myself to think that we might just be OK. I was standing backstage before the iPod Mini was unveiled during the first few days of January in 2004, and an unusually big and very hairy forearm encircled my neck from behind. I didn’t need to look to know who it was. “We did it! We’re gonna make it!” Robin barked, grinning from ear to ear.

Throughout those times, I did sometimes notice Robin becoming very quiet and seemingly sad, but then he’d think of something or feel the need to ready himself to turn on and become the Robin so many people loved, and that whirlwind force-of-nature energy would explode from him once again. In recent years, as with others I know who cared for him, I fell out of touch with Robin, and I will now try not to feel guilty about that. I made a note only a few weeks ago to get in touch with Robin, so I could tell him that so many years after we shared the dream of creating a lot of original Audible programming that we could deposit directly “into the ears” of millions of listeners, that vision was finally becoming real. But I didn’t get around to it. So I woke up this morning thinking I could at least honor the memory of an American genius who believed in Audible when hardly anyone else did. I find myself thinking too often of late that people only really die if they are forgotten, so I thought I’d share these things to help make sure this doesn’t happen in the case of the preternaturally talented Mr. Williams. 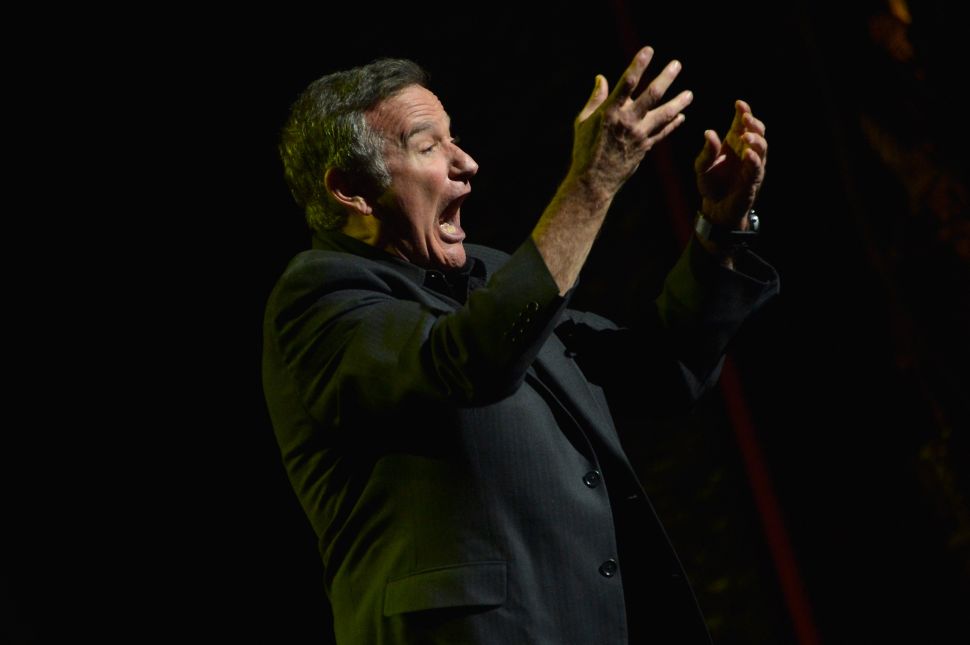