CHRIS: My first poisonous rose goes to AshLee. AshLee not only made Graham almost pass out but she also made Lacy throw up. I’m going to say it was a combination of vodka sodas, heat, and the final realization by Graham that AshLee just might be crazy. [Ed. note: or was it WITCHCRAFT?!?!?!] Still prim and proper, AshLee keeps her cool and gives Graham the rose…he accepts…and Lacy throws up. The first ever poisonous rose in Bachelor history.

CHRIS: I give Lacy mad props for escaping the scene and making sure that she’s not seen throwing up on national TV. I probably would’ve just thrown up on the person next to me and created a chain reaction of vomit by the other cast members. Now that would be some serious TV.

A rose to the interactive maps ABC keeps using to show viewers where the contestants are traveling for their dates. I’d love to see the Venn diagram of people who care about Bachelor in Paradise, and people who are genuinely interested in Mexican geography. Also, LOL that Christy and Jesse’s date is definitely a we-ran-out-of-real-date-ideas-so-let’s-just-send-them-to-a-random-village Bachelor classic.

CHRIS: A rose to the random dog on Christy and Jesse’s date: if Christy were a dog whisperer she would’ve known that the dog was trying to tell her that Jesse really is like all the guys she used to date. I’m not a dog whisperer, but couldn’t you just tell by the way the dog looked at Jesse? I think the dog actually rolled her eyes at him. More tequila for the cute couple!

CHRIS: The awkward-cute rose goes to Robert and Sarah. They seem so fond of each other and the sexual tension going on here is crazy. I’m literally screaming at my TV for Robert to kiss this girl already…and boom! It happens! “Saradise” is in full effect! Way to go, girl.

CHRIS: The protein rose goes to Cody. Seeing him bench press Michelle with such ease made me get on the phone with my gym and let them know I’ll be in tomorrow since it has been such a long time. His quads are seriously as big as Michelle’s torso. Not only is this guy jacked but he’s obviously into Michelle and his emotions are in full Cody mode. Michelle is a little worried, but I have a feeling the protein will prevail.

CHRIS: The bravery rose goes to Zack. Zack was brave enough to tell Clare that this relationship is a little too tense for him. He wants to chill and drink tequila with the other chill people. Well, hopefully he learned from me…because after my date with Clare I went the tequila route and ended up in the ocean with Elise. No regrets! Someone get Zack a shot.

CHRIS: The genius rose goes to Clare. When talking to Michelle, she’s like “Dude, there’s way too much drama here for me.” I’m thinking to myself, this show has never been known as dramatic, right? Oh wait, it is dramatic. Or is it? I’m so confused. Welp, instead of breaking her leg to find an excuse to leave paradise, Clare is honest with herself and Zack and decides it’s time for her to leave. I’m sad to see Clare go, especially with her runny nose and puffy eyes. Did she really have snot on her nose? She just wanted to get the hell out of there. Tequila shot for Clare.

A rose to Clare’s tragic, cathartic speech during her self-imposed trip to the airport: “I’m sick of being hurt. It’s exhausting. I’m so tired of feeling these feelings. I just wanted something fun, something good, something happy. This is why I just wanted to do Dancing With the Stars.” DON’T WE ALL, CLARE?

CHRIS: The free spirit rose goes to who else? Lucy! Clothes optional. Why the hell not — it’s Paradise! Free spirit in full effect and Jesse the hornball is like “Hellllll yeah!” I feel like there is already a show out there for Lucy called Naked and Afraid, but leave out the afraid part.

A rose to Christy, for showing up and spilling tea EVERYWHERE while sporting one of the worse sunburns we’ve seen so far. “Maybe when I have two glasses of champagne I might think that I’m a little bit hotter,” she says after her “best friend” Lucy shows up and takes Jesse on a date.

A rose to super unique couple Lucy and Jesse for their commitment to getting wasted at Chichen Itza. Ever wonder what the Maya people in the Great Beyond are thinking about all of these jokers using their meticulously built temples, etc., as the backdrop for makeout selfies and the consumption of infinite beers? My guess is something along the lines of “DAMN it, 2012 was supposed to be our year!”

CHRIS: The REAL beautiful rose goes to Michelle. She looks really beautiful in the wedding photo shoot she did with Cody. She’s a little worried about how fast Cody is moving with his feelings, but this is a show about feelings. We talk about how our feelings feel. She has been married before and this wedding dress is bringing back not-so-great memories of her previous marriage. In the meantime, Cody is waiting for her on the beach on one knee. This date is amazing. No push ups, no tequila, just an imaginary wedding. Bachelor perfection. Noooo pressure.

CHRIS: The Party Rose goes to the beautiful blonde, Christy. After she said, “There’s so much booze here, and nobody is drinking it! Why!?” [Ed. note: She had legitimate tears in her eyes. LOVE HER] I stood up off the couch and started a slow clap for her. When in paradise, we drink! Right?! Isn’t that something that all the cool kids are saying/hashtagging? #YOPO! Shot of tequila for Christy!

CHRIS: The LOVE rose goes to Marcus and Lacy because they’re obviously in love. It’s nice to see. For short periods of time.

CHRIS: The Pimp Rose goes to Jesse. This guy is unbelievable. He made a tray of drinks and brought it down to the beach for everyone. I would not trust what that man put in my drink if I was of the female gender, but Christy and Lucy are ready for the Jesse. Let’s make out now…not later! And later…and more…and more… Did I just see a butt cheek? What is this show rated!? The free spirit is coming in hot and Jesse and “The Jesse” are excited. Where is all this tequila coming from? I’m having flashbacks to my Bachelor Pad days.

A rose to Lucy for attempting a very confusing robbery (TM Jersey Shore) when she tells Jesse that Christy told her that at first she thought she was making out with Lucy the night until she realized “Lucy doesn’t have a beard.”

CHRIS: The Final Rose goes to Jesse. Thank you for making this so damn entertaining. I feel like there’s two separate shows going on: The Jesse Show, and then The Other People Show. I wish Christy and Lucy could both stay, but only one could stay and that’s Christy. Jesse, you may be looked at by most as a player, and trust me I’ve been there, but you make me want to tune back in next week to The Jesse Show. I just hope karma doesn’t (or possibly does) kick you in the butt. Two shots of tequila for Jesse and “The Jesse”! 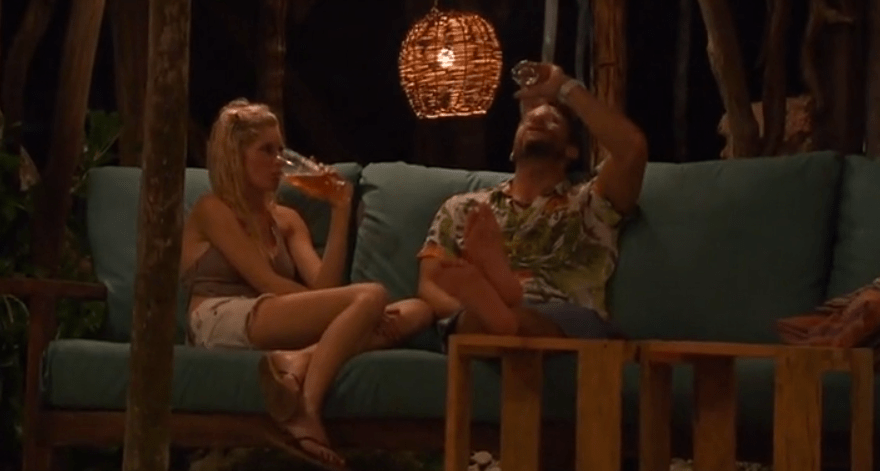