Peter Cancro suffered from no evident youthful indecision where career choice was concerned. A native of the shore town of Point Pleasant, New Jersey, Mr. Cancro began working at a sandwich shop then called Mike’s Subs as a 14-year-old high school student. Before his 18th birthday, with the help of a loan from a football coach who worked as a banker, he owned the store. He’s had little call to second-guess himself. Mike’s Subs has since evolved into Jersey Mike’s, which ranks among the fastest growing sandwich franchises in the country. (There’s one in the Financial District.)

Still, even the finest cheeses do not gather value with age in quite the way of sprawling condos less than a block from the Park. And Mr. Cancro’s business acumen does not seem to have diminished over the years; he and his wife Tatiana have just scooped up a four-bedroom unit at 11 East 68th Street for $15.68 million, according to city records.

The building, which is known as the Marquand, is named for Henry Gurdon Marquand, a financier and one of the 19th century’s foremost art collectors, who built on the corner of 68th and Madison an assemblage of limestone and brick homes that the Times once likened to “a French palace, albeit one with streetcar tracks in the front yard.” In the model unit.

The Cancros, who purchased their fifth-floor place as a sponsor unit from developers HFZ Capital Group, for whom Douglas Elliman’s Madeline Hult Elghanayan and Sabrina Saltiel handled the listing, have, of course, only a fraction of Marquand’s former holdings. But it’s a sizable one nonetheless. The living, dining, family rooms and library are arrayed in an open layout on the southern side of the apartment, while sleeping quarters, including a maid’s room and a massive master suite spread out to the north. Ceilings are 10 feet high and the other particulars are suitably grand: private elevator, paneled gallery, wood-burning fireplace situated in a mantle of Travertine marble.

There’s also an “open eat-in contemporary chef’s kitchen with center island,” whereupon to array, of course, what else but Jersey Mike’s? 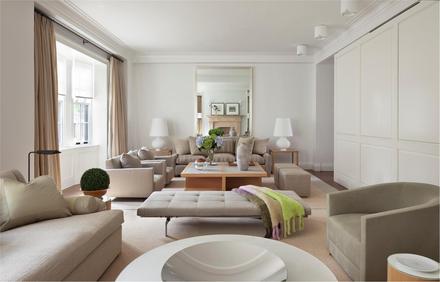