The New York Post has loudly declared that squeegee men are back — and “terrorizing” New York City’s streets — but Police Commissioner Bill Bratton said this morning the city is beyond the bad old days.

“Today’s New York Post, you think we were being overrun by squeegee pests,” Mr. Bratton said during an interview on CBS This Morning. “They’ve documented three people who they’ve seen acting as squeegee pests. We’re not being overrun. Those will be taken care of very, very quickly.”

The cover of the right-leaning tabloid featured a picture of a man wiping down a car windshield with the headline: “Bad Old Days.” An online headline read “Squeegee men are back and terrorizing city streets.” The story documents one “glassy-eyed man” with “filthy, cracked fingers” using a copy of A.M. NY as a rag in Manhattan, and two others working on the Queens side of the Queensboro Bridge, though it notes drivers have seen squeegee men elsewhere.

The squeegee men — who typically clean windows without asking and then demand payment — were a fixture in the New York of old, and were heavily targeted by Mr. Bratton in his first round as police commissioner under former Mayor Rudy Giuliani. It’s an oft-cited, visible example of the type of quality of life crimes targeted by Mr. Bratton’s “broken windows” theory, which posits that reducing minor crimes and disorder also reduces violent crime. This squeegee man is forced to use AMNY because he doesn’t want to pay for The Daily News, according to the Post.

That theory is now under attack from some activists who insist it unfairly targets minorities, who they say are more often arrested for minor crimes like selling loose cigarettes — which is what police were seeking to charge Eric Garner, 43, with before the Staten Island man died in their custody after they used an apparent chokehold.

Mr. Bratton tied that debate to the squeegee men: “But here’s the dilemma. You have those who want it enforced and those who don’t want to enforce it. We enforce the law. We enforce behavior, and we don’t go after any class of people.”

The commissioner insisted the policing strategy is the reason New York City is the safest big city in the world.

The CBS appearance was Mr. Bratton’s first on national television since Mr. Garner’s death, which was caught on video and has sparked rallies, controversy and plenty of news coverage.

While Mr. Bratton said the part of the video most people have seen is a “snippet,” — Mr. Garner was recorded screaming “I can’t breathe!” over and over — he acknowledged it wasn’t pleasant to watch.

“What we see is certainly disturbing. Policing unfortunately, when force is used, is never good to look at. This particular scene, which has been repeated thousands upon thousands of times, really has struck a chord in the public,” Mr. Bratton said. 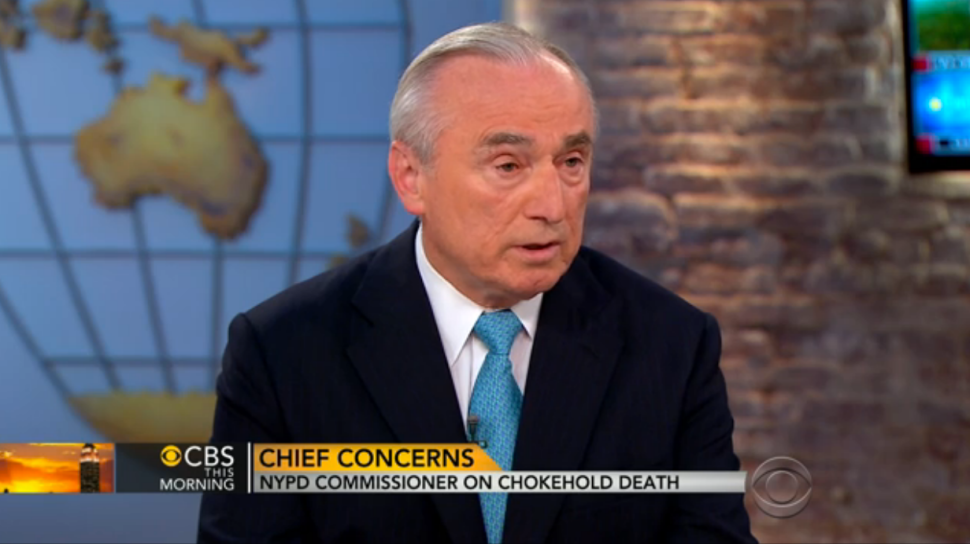