Mayor Bill de Blasio went to the Lincoln Houses in East Harlem to talk about crime reductions and safety upgrades in the city’s public housing stock — but some residents just didn’t want to hear it.

The mayor was heckled by at least two people who gathered to watch his press conference in a sunny courtyard Wednesday, where he stood strategically in front of construction workers removing scaffolding residents have long complained are a blight and a danger.

As the mayor sought to take the microphone after Council Speaker Melissa Mark-Viverito spoke, a man shouted in Spanish at the mayor about needing more security. Mr. de Blasio at first tried to keep talking, but eventually paused and offered: “Thank you, brother.”

Shortly after, NYPD Chief of Housing Carlos Gomez was also met with a skeptical response from a local resident as he spoke.

“July first, the crime in housing was up. It was up for the fifth year in a row. With the additional officers, and resources, the additional work being conducted by other city agencies, I’m proud to say as we stand here today crime in public housing is down, more than 4 percent — that’s higher than the city averages,” Mr. Gomez said.

“Since when?” a woman called out. “Since when it went down?”

“From July 1 until now crime is down double-digits throughout NYCHA in the city, down 13 percent. Murders are down 18 percent, and our shooting incidents are down in NYCHA,” Mr. Gomez said.

When asked by a reporter about that response, the mayor said he understood why it seemed to some residents that crime had not truly fallen.

“Because it takes time, first of all, for everyone to feel it. And I don’t blame anyone who is feeling there isn’t enough yet in the way of improvement. We have a lot to do. The numbers that Chief Gomez gave are the numbers, and that clearly means progress,” Mr. de Blasio said. “That means some people are alive today who wouldn’t have been otherwise, some people are safe today who wouldn’t have been otherwise.”

Though the city has had 29 fewer murders this year and 1,000 fewer robberies, the mayor said, people won’t believe in change until they see it — comparing it to the focus of his press conference, the removal of the scaffolding or “sheds” that residents argued served as hiding places for guns and illegal activity.

“Until people see the sheds down, they aren’t going to feel the benefits,” he said.

After the press conference, Mr. de Blasio enjoyed a brief and seemingly friendly chat with the man who had shouted at him in Spanish.

According to Mr. Gomez, crime in public housing is now down: Year-to-date, in the Housing Bureau citywide crime is down 4.2 percent, with murders down 5.9 percent, rapes down 3 percent, and robberies down 5.6 percent.

Still, shootings are still up in NYCHA developments over the course of the entire year — and are up citywide, outside of public housing complexes — though they have fallen in the Housing Bureau since July 1. 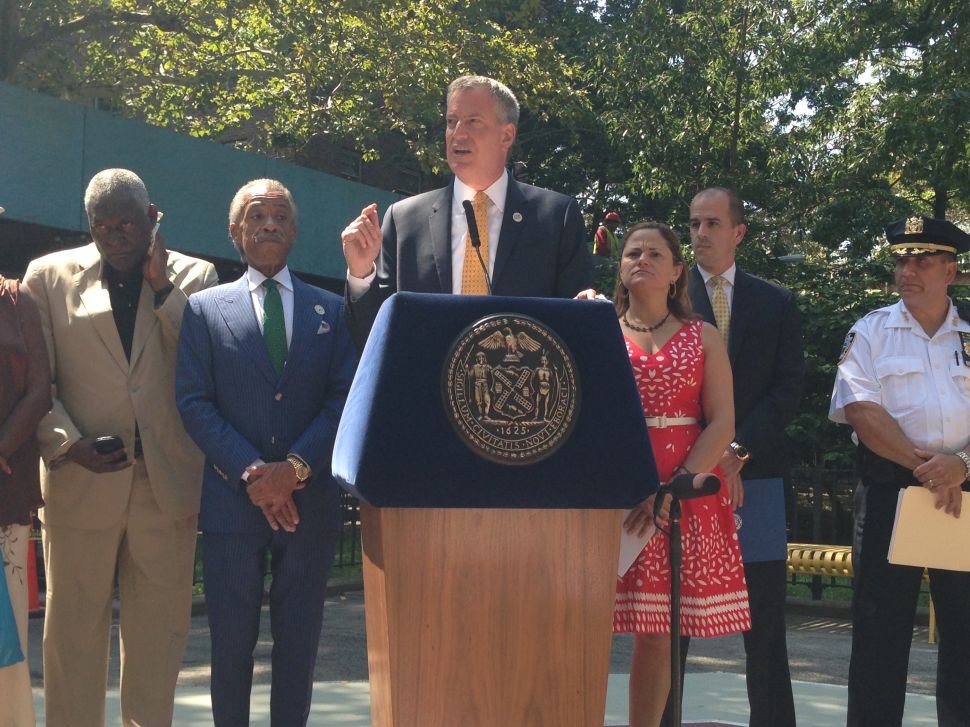