“Fear-mongering,” “irresponsible,” and “opportunistic.” Those were just some of the descriptions Mayor Bill de Blasio used for an open letter the president of a police union wrote in the New York Post and New York Times today.

Edward Mullins, the president of the Seargants Benevolent Association, ripped Mr. de Blasio’s bid to bring the Democratic National Convention to Brooklyn, claiming in a letter that New York City is “is lurching backwards to the bad old days of high crime, danger-infested public spaces, and families that walk our streets worried for their safety.” Mr. Mullins, in calling for the DNC to not come to Brooklyn’s Barclays Center, infuriated the Democratic mayor today, who said his letter was little more than a petty bargaining ploy in labor negotiations between the city and police unions.

“It’s clearly an effort to advance their position in terms of contract negotiations and I think it’s an irresponsible act on their part. It’s fear-mongering to try to benefit their own position in labor talks and that’s just not responsible,” he added. “If any unions want to try and better their economic position, that’s certainly their right. But do it based on facts: don’t try and stoke fear.”

Their attempt to keep the DNC out of Brooklyn represents a new salvo in their ongoing battle with the mayor. Privately, the de Blasio administration feels the union leaders are trying to score points with certain segments of their membership and initially brushed off their criticisms. But today’s remarks from Mr. de Blasio–given separately before an announcement on a different deal with a city union–represented the most pointed rebuke the mayor has given the police unions to date.

“It’s interesting to watch how different unions comport themselves,” Mr. de Blasio said. “Some union leaders choose to take opportunistic actions and irresponsible actions … it’s not the right way to do things.”

The mayor also dismissed suggestions that Mr. Mullins could successfully sabotage his goal to bring the DNC to Brooklyn in 2016.

“I think it’s so obviously opportunistic that no one will give it too much regard,” he said. 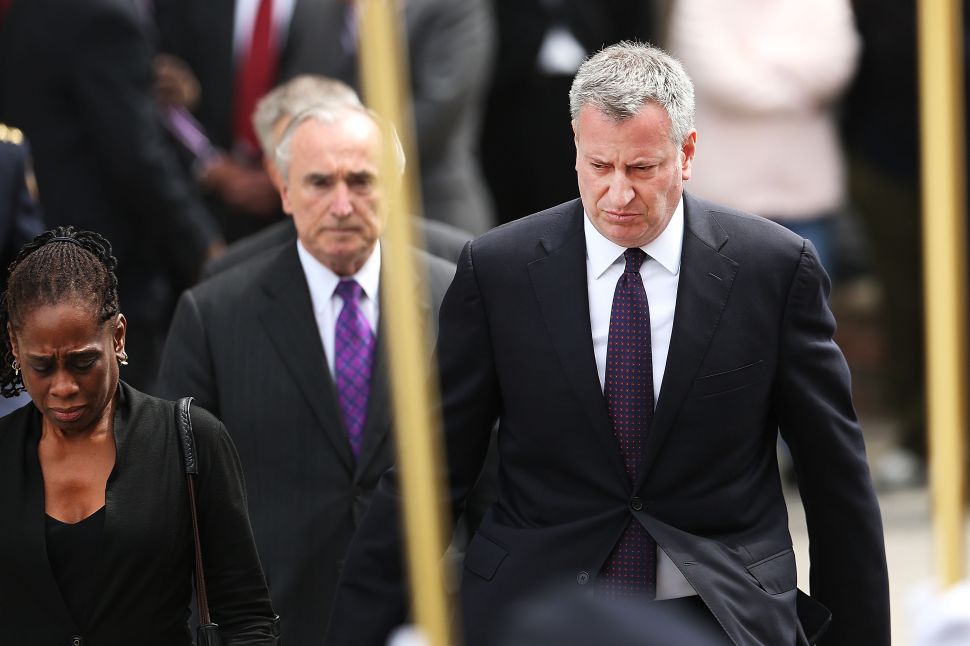