Wherever Rev. Al Sharpton holds his much-debated march in the wake of Eric Garner’s death, Mayor Bill de Blasio won’t be there.

“I don’t plan on attending that event. I plan on doing a number of other things that I think are going to help move this forward,” Mr. de Blasio told the Observer Friday at a unrelated 9 p.m. press conference in a Brooklyn community center.

Mr. Sharpton had originally planned to hold his August 23 march on the Verrazano Bridge, a span that connects Eric Garner’s native Staten Island to Brooklyn, where black teenager Yusuf Hawkins was shot to death 25 years ago. But in the wake of safety and logistical concerns, it appears Mr. Sharpton is reconsidering.

“I think he’s made it very clear that he’s looking at other options. There’s been a close coordination with the NYPD in terms of what, logistically, makes sense,” Mr. de Blasio said. “We respect anyone’s right to express their opinion in this country — it’s something the NYPD is extraordinary in their ability to work with any group, any cause, and they will work of course with Rev. Sharpton and National Action Network. But there are very real logistical challenges vis-a-vis the bridge and I think the reverend has acknowledged that.”

He continued: “So I think we’ll wait and see how the next days play out, but I think we have a good chance of getting a good solution that works for everyone.”

After three days without taking questions from reporters, the late-night event about community centers with extended hours drew many questions about the ongoing controversy surrounding the planned march and Mr. Sharpton’s role in the mayor’s response to Mr. Garner’s death in police custody, now ruled a homicide.

Though he’s welcomed Mr. Sharpton to City Hall — drawing the ire of police unions — and has made reforming the NYPD a priority in his campaign and mayoralty, Mr. de Blasio said he wouldn’t be marching with civil rights activist.

Instead, he rattled off ways he’s been working to change the NYPD — reducing the use of stop-and-frisk and marijuana arrests, for example, as well as Police Commissioner Bill Bratton’s plan to retrain the entire police force on the use of force.

“That’s what I’m focused on, those actions that will result in real substantial change,” he said.

But the mayor also plugged a newly announced event that will surely be yet another way he sees to publicly show he is engaged with the community following the death: a gathering of senior religious leaders to be held by Cardinal Timothy Dolan “focused on healing and deepening the relationship between police and community,” according the mayor’s office.

Mr. de Blasio said he thought it would be “an important moment” for the city. He spoke more than once about moving on and finding real reform after Mr. Garner’s death — going beyond the rhetoric of any one individual.

“That was a real tragedy and it grabbed at all of us, it grabbed at our hearts,” Mr. de Blasio said. “But it’s something that has to be part of the past, meaning we have to move past the tragedies and the tensions.”

Mr. Sharpton is set to announced final details of the march, with the family of Mr. Garner by his side, Saturday morning. 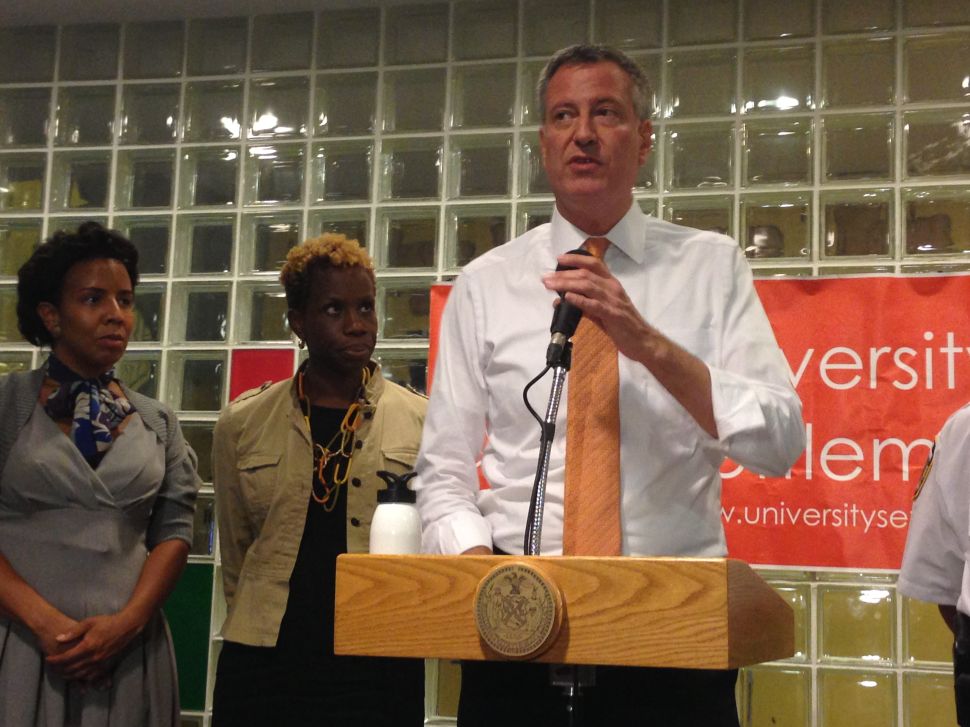