After Trina Merry paints her models, she photographs them against NYC backdrops. (AP/YouTube)

Artist Trina Merry is giving a new meaning to the term “blending in,” The Associated Press reports.

The San Francisco transplant is introducing herself to the city, one landmark and nude model at a time. Ms. Merry uses body paint to camouflage models into the city’s skyline, then photographs them against the backdrops to preserve her work.

“I wanted to engage the city and understand it and make some observations,” Ms. Merry told AP. “So instead of a person right in front of the Empire State building or the Statue of Liberty, they’re softly in the background, and you’ve got more of a reflective view of the person within the landscape.”

Ms. Merry’s models aren’t fully nude, most wear bikini bottoms and footwear, taking full advantage of the laws in New York City that say it’s legal for women to be topless (the same laws that allowed Scout Willis to parade around topless on the Lower East Side this spring). The only thing that gets in the way of her art, Ms. Merry told the AP, is rain and disruptions from the occasional passerby. Watch her work in the AP video below. 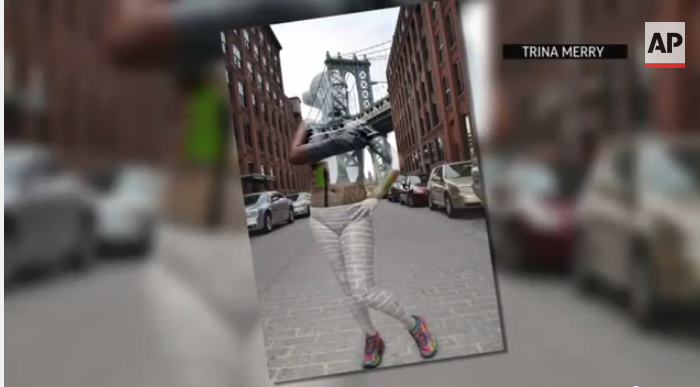