I think, sometimes — perhaps too often — about Versailles. It was by all accounts, staggering: all of the richest people in France staying in one of the world’s grandest palaces eating and drinking themselves into a stupor at the feet of Louis XIV while the country fought and starved. It was, and remains, a symbol of the purity of excess: a grand, insane bacchanal that seemed to aspire to nothing less than oblivion. Of course, there were good political reasons for the thing that was Versailles to exist as well (keep the nobles drunk enough that they neither notice or care that you’ve become an absolute monarch), but the main takeaway is this: one of the most powerful men in the world used the resources of his nation to throw the bitchingest party on Earth.

This week, I’m thinking about Versailles because of Burning Man.

Burning Man is a weeklong celebration (as with Versailles, “of what” doesn’t really matter) in the Nevada desert. People wear their wildest costumes, do drugs, make art, make a really big fire, and, from the peculiarly utopian viewpoint of this particular party, form a more perfect society based on creativity, respect and community in one of the most desolate places on earth. In recent years, the old hands have complained about an infestation of tech elite corrupting the original intent with private jets, air-conditioned tents and other trappings of the crippling class divide that we struggle with back in the real world. The popular kids ruin everything.

There’s something funny about that idea — that doing drugs and hanging out in the desert can be corrupted by rich people doing drugs and hanging out in the desert — but of course, anyone might get annoyed when somebody off the guest list shows up at their party. But it’s the natural progression: in many ways, the feel-good imaginary ethos of the tech industry is borrowed from the same hippie mentality that birthed Burning Man, just augmented by ferocious business tactics and some of the most striking fortunes on Earth. With that, Burning Man has evolved into the perfect bacchanalia to celebrate all of their smirking contradictions: they’ve taken an absurd spectacle and turned it into a truly absurd spectacle. One of this year’s statues, “The Embrace,” will measure 72 feet tall with characters proportional to the Statue of Liberty. Louis XIV would give his grudging approval.

“I really feel like Mike Judge has never been to Burning Man, which is Silicon Valley,” opined Musk. “If you haven’t been, you just don’t get it. You could take the craziest L.A. party and multiply it by a thousand, and it doesn’t even get f***ing close to what’s in Silicon Valley.”

Versailles was the France of the Sun King: lavish, baroque, utterly focused on one man and obsessed with the elaborate rules that governed an insulated elite. But rich people are different today. Sure we still have plenty of aristocrats who are perfectly fine with decadence for decadence’s sake, but it is fashionable in the tech world and elsewhere to be coy about extreme wealth. One must pretend that a $30 billion personal fortune is a sort of second-degree side effect of saving humanity. Burning Man runs off a sharing economy — there is no money allowed. What better playground for the post-capitalist tech oligarch?

There’s a peculiar mindset about this post-several-times-removed-modern version of society in which it is not enough to just have a gigantic party — it must be an important party, for some reason. There must be themes or commentary.  It must expand your mind, it must expand society, it must create history. We must innovate! Maybe even disrupt! It’s as if we are embarrassed about getting high and indulging ourselves while so much of the world grapples with the whole manner of things that they are grappling with, just not enough to not do it.

The Shah of Iran spent a fabled $100 million on the 2,500th anniversary of the Iranian Monarchy, serving up elaborate roast peacock on Limoge porcelain china and Champagne in Baccarat crystal, in an elaborate Tent City. Henry the VIII and King Francis I nearly bankrupted their respective countries trying to show off their wealth at what was technically a diplomatic conference. Freddie Mercury supposedly hired little people to serve cocaine from trays on top their heads at his 39th birthday party. Caligula, I mean — Caligula. With the ever more ambitious art projects and ever-increasing Silicon Valley presence, Burning Man enters the books as the iconic party of the tech world’s Gilded Age: it’s different than those other parties, sure, but sort of the main benefit of infinite resources is the ability to do whatever you want.

There’s absolutely nothing wrong with Burning Man: nobody can take away your right to party. Burning Man appears to be the exact party a lot of people want so, you know, go nuts. But our own era’s somewhat cute addition to that idea is that somehow this absurd party is not a bunch of people getting messed up, but an odd utopian fantasy. I suppose the Shah argued that his party was meant to spur foreign investment in Iran.

As a point of comparison, here’s a party that changed history: Alexander The Great got drunk and burned Persepolis to the ground. Top that, Zuckerberg. 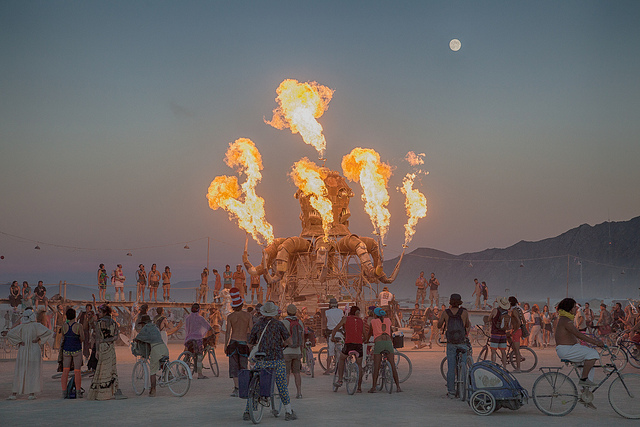