“Is this one spicy?” I asked, pointing to a tan plastic ramekin half-full of scarlet salsa.

“Oh. Is this one spicy?” I asked, pointing to a neighboring ramekin shimmering with salsa verde.

“Do you have one that is spicy?” I enquired, inflecting my voice in a way I hoped would draw out a yes.

“Do not worry,” said Edgar, in English drawn finely as intaglio, “these are not spicy.”

“Do not worry,” he comforted me, “these are not spicy.”

I gazed for a moment at the smiling busser, who had bright, evenly spaced teeth and was shorter than I am, with skin a few shades darker. I thought of where I was, at Cafe El Presidente, a sprawling Flatiron taqueria decorated like an authentic Mexican market, with high ceilings, bicolored columns, rickety tables, tiny coat racks and a tortilla machine named Lenin. I looked at my plate, where, under a mound of lettuce, two poached eggs from Keepsake Farms in Fishkill lay atop a few ounces of chicken tinga and a corn tortilla, waiting for a spicy sauce that might or might not exist to add some purchase in the umami wars. Finally, I said:

“Si!” said Edgar, smiling. He left and quickly returned with another sauce, which was bright yellow and viscous.

I emptied the thing onto my breakfast.

Flatiron, where one finds both Cafe El Presidente and Eataly, is dominated by fantasies of foreignness. Eataly is an edible Cinecitta backlot production, like Wonka’s Chocolate Room but savory and in Italiano. Similarly, Cafe El Presidente probably has more in common with the Nacho Libre set (100 Universal City, Universal City, CA, for those interested) than an actual market one might find in Oaxaca. Nevertheless, both Eataly, which is not the subject of this review, and Cafe El Presidente, which is, are charming. The restaurant, an offshoot of Nolita’s Tacombi, is bright and airy. It serves an unexceptional yet highly enjoyable selection of faintly regional tacos. The service needs work—even during ebb tides it was uneven and confused—but the ambience seduces and the tacos dayenu.

Apparently, the place becomes a scene at night, but during the day—it opens at 7 a.m. for breakfast and serves lunch/dinner till 1 a.m.—it’s calm and unhurried. The high ceilings and the cavernous space, the lightness of the chairs, the tanness of the plastic plates and the scuffed orange paint on the pillars feels comfortingly institutional and lazy. A dropped fork happily clatters. Cafe El Presidente combines the joys of an asylum with the flavors of the Yucatán.

That is, of some flavors of the Yucatán, and some of the Sonora and a few of Michoacán. At their best, the varied cuisines of regional Mexican cooking—not unlike most delicious things—are held taut by a cat’s cradle of acidity and fat, spice and sweetness. Take the taco al pastor, a Central Mexican mainstay. Onions, pineapple, roast pork on a corn tortilla: It’s a four-way tug of war, a pas de quatre or a Calder mobile, and when done right the flavors are light and graceful.

At Cafe El Presidente, the notes are there but the chords somewhat diminished. For example, with the El Pastor Madison D.F. ($12.95) the grilled pineapples are perfect, the tortillas smeared with the orange fat of the pork, and the meat (cut from a rotating spit) succulent. But garnished with a tablespoon of avocado crema, that cutting note—of either acidity or spice—was missing. Lack of countermanding acid also ankled the otherwise serviceable guacamole ($11.49), which normally relies heavily on a backbone of citrus to structure its lazy-ass tendencies. Not even the salty, crispy and unusually thick topoles could deliver it from vague dissolution. The carne asada, served Monterrey-style, was like late Billy Crystal: safe, bland.

The specials—one larger taco per order—fared better, the most successful the Gringa Madison ($7.95), which makes sense considering the audience. Under a sheen of grease, the pastor pork finally comes alive amalgamated with chihuahua cheese. (If you can’t win with spice, call in the fat.) The pleasure of sucking the grease the moment before eating a bite is as ineffable as it is obscene. A Sonoran shrimp taco (market price), though far more prudential, snapped too with fresh red cabbage and those well-grilled lump sums of cholesterol, shrimpies. The vegetarian options—a sweet potato and black bean ($2.95) and a swiss chard and poblano pepper ($2.95)—felt and tasted as tossed off as the handful of cotija cheese on top of them. They are an argument against protein-based selection processes.

So is Cafe El Presidente a winner or a loser? The ceviche Guerrero ($14.95) was left to be the Justice Kennedy—not coincidentally, the least “authentic” dish on the menu. Chef Jason DeBriere acidulates his Montauk fluke less than traditional ceviche, leaving it somewhere between ceviche and sashimi. To this he adds pickled onions, pickled jicama and bright bursts of chili and chili oil. Here his flavors sing in proper proportion and alignment. It’s music of the spheres.

There are, of course, other reasons to go to Cafe El Presidente, more than to not, such as six tremendous juices and four aguas frescas. There is Mexican coke and more importantly Spiked Coke, which looks like Coke but is generously laced with mezcal. Mr. DeBriere, formerly of Peels, resurrects his famous biscuit a la maniere mexicaine, a fluffy tongue ottoman studded with roasted jalapenos and cotija cheese ($3.49). There are the simple pleasures of an empanada and coffee. And those eggs tinga ($13.95) after being doused in the habanero-mango salsa Edgar finally brought, weren’t bad either.

And then there’s Edgar himself, who’s from Veracruz and likes working at Cafe El Presidente. When I asked him the difference between the two, he told me winters in New York are cold, but the snow is beautiful. Was that tactful avoidance or more miscommunication? Whichever, he was undoubtedly right. 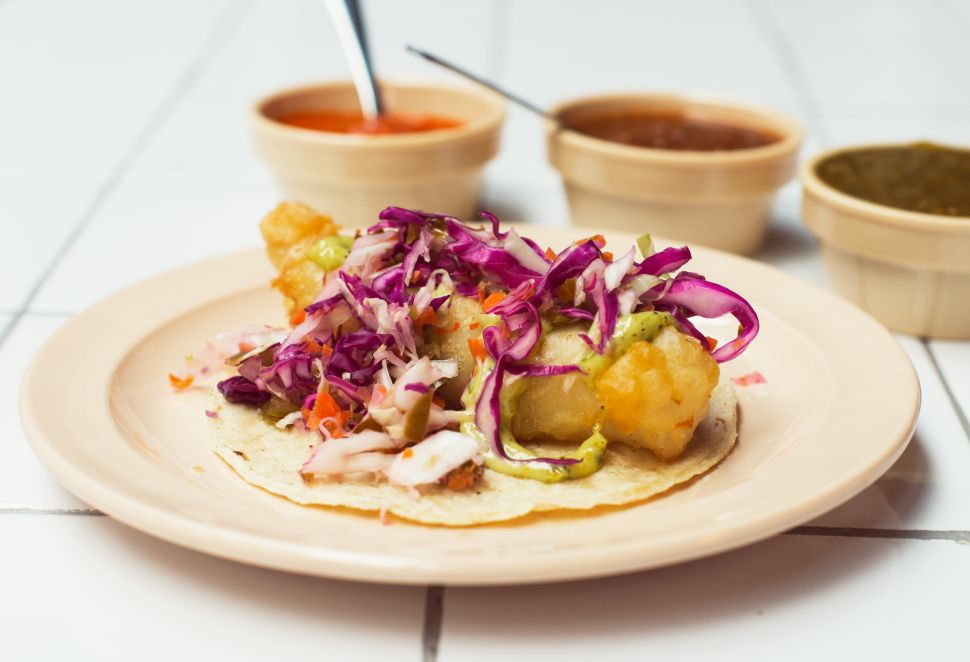