Teen sexting has somehow become the police’s number one priority of late — not just in the U.S., but in Canada, too.

A sex crimes unit of the Ontario Provincial Police is gearing up to debut an app that helps kids reject requests for naked photos, Yahoo News reports.

The app, called Send This Instead, reportedly offers 57 “humorous” and “sarcastic” messages teens can send out to people who try to sext with them. Based on these iTunes screenshots, we have reason to believe the retorts were drafted by a bunch of out-of-touch, over-concerned dads:

“That would violate both my data and dating plans, neither of which include you”

“Sorry no, but one day I hope you find happiness… Though ‘Happiness’ will probably be his prison name.”

“Is it possible to get an STD from a conservation cause this TXT is making me itchy” (um, ew?)

“Sorry, just in the middle of something… Can I reject you later?”

Along with the messages, the app — which launches next week — will also offer “reference points and links for youth dealing with issues around the sharing of intimate images,” according to its iTunes description.

“It’s not going to solve sexting,” Inspector Scott Naylor, who manages the sex crimes unit, is quoted as saying. “We’re just giving kids an alternative strategy to deal with it.”

As we’ve noted before, it’s obviously important for police to crack down on middle-aged creepers soliciting naked pics from minors. This app would be useful in those types of situations. But it’s a huge waste of law enforcement’s time and resources to focus on stamping out teen-to-teen sexting, which, though technically illegal, is often just a harmless way to flirt and explore their sexuality.

But hey, at least no one’s trying to photograph anyone’s erect penis, this time around. 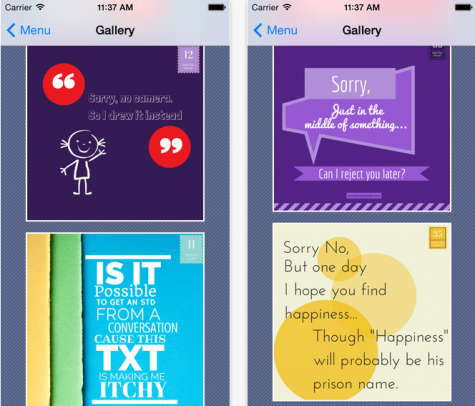