On July 30, the New York Times released an editors’ note saying that arts reporter Carol Vogel had “improperly used a section from a Wikipedia page without the correct attribution” in an article about painter Piero di Cosimo. Ms. Vogel’s use of language from a Wikipedia entry was first reported by Media Bistro‘s FishbowlNY blog. (Ms. Vogel’s original piece, FishbowlNY reported, has since been appended with a note that concludes “it should not have been published in that form.”) Ravi Somaiya, in an article published in the Times on Wednesday, quotes Eileen Murphy, a spokeswoman for the paper, saying that editors are “not aware of any other problems like this.”

But further instances of language that appears to have been lifted from other sources have been dug up by ARTnews, including in one instance a nearly verbatim passage from the Times’ obituary of David Foster Wallace, and on Thursday afternoon, Erik Wemple of the Washington Post called our attention to three more questionable passages with the disclaimer, “Even if you credit Vogel for tweaking things sufficiently to avoid direct copying—we do not—you cannot escape the conclusion that Vogel — an arts writer for the New York Times, no less!—hadn’t done the work of formulating her own, original abridgement of arte povera.” (Ms. Murphy told Mr. Wemple, “We’re not aware of any other incidents that would cause us concern.”) On Thursday, a source sent us three further examples of language and structure in Ms. Vogel’s writing that seem to run parallel to previously published writing.

Ms. Vogel, in a piece from March 7, 2013 about an exhibition by Edmund de Waal, best known for his memoir The Hare With Amber Eyes, describes Mr. de Waal’s acquisition of Japanese netsuke:

Chronicling the journey of 264 Japanese netsuke—wood and ivory carvings of animals, plants and people, none larger than the palm of a hand—that Mr. de Waal inherited from his great-uncle Iggie, “The Hare With Amber Eyes” is a sweeping story that begins in Paris in 1871 and progresses through five generations of the Ephrussi family, whose collection of netsuke made its way to Vienna, where it was thought to have been confiscated by the Nazis, and decades later ended up in London.

That language seems to have originally come from a review of The Hare with Amber Eyes in The Guardian, written by Rachel Cooke and published on June 5, 2010:

De Waal has inherited 264 Japanese netsuke–wood and ivory carvings of animals, plants and people, none larger than the palm of his hand–from his beloved great uncle Iggie, and though they’re a relatively recent arrival at his London home, already he fears their story is growing too “poised[.]”

The next passage comes from an article by Ms. Vogel from June 6, 2013, about the Whitney Museum’s Richard Artschwager-designed elevators at its future location in the Meatpacking district:

Mr. Artschwager, who died in February, had been involved with the Whitney for more than a half-century, [Whitney director Adam D.] Weinberg noted in an interview, and the museum owns prime examples of work from every phase of that artist’s career, from his furniturelike sculptures covered with wood-grain Formica to paintings that look as though he applied smudged soot.

Compare that with a review of a show of work by Richard Artschwager at the Whitney, from October 25, 2012, by Ms. Vogel’s colleague, Times critic Holland Cotter:

Part of his cachet was that no one quite knew what to do with him, this artist who made furniturelike sculptures covered with wood-grain Formica and paintings that appeared to be done with smudged soot.

Another instance of parallel language comes from Ms. Vogel’s Inside Art column from March 7, 2013, in an item about an installation of work by Philip Haas—a series of sculptures called “Four Seasons”—at the New York Botanical Garden:

“Autumn” is a knotty tree trunk, his ears a pair of cherries, his beard made up of strands of moss and his cloak consisting of plaited straw, all actually in painted fiberglass. A humanoid form with gnarled tree limbs and locks of tumbling ivy represents “Winter,” and “Spring” is a man with eggplants hanging from his hair, corn sticking out of his collar and an artichoke for a buttonhole.

This writing appears similar to a short review in The Telegraph from July 2, 2012 by Sarah Crompton of the same work on view at the Dulwich Picture Gallery:

So Summer is all bright colours and healthy leaves; he has a rose for his chin and cheeks, and a garland of flowers in his hair. Winter shows his colours with locks of tumbling ivy, a crown of ragged branches and moss on his chin. Spring, on the other hand, features an artichoke for a buttonhole, and corn pokes out from his collar; with his marrow of a nose and aubergines hanging from his hair, he looks a bit like a sculptural dish of primavera pasta. Autumn is distinguished by caterpillars for eyebrows and blackberries for the pupils of his eyes.

It’s not like Ms. Vogel has made up stories or sources out of thin air, but there would appear to be a pattern of cutting corners in her writing. These examples, along with others cited by the Washington Post and ARTnews, would seem to contradict the Times’ conclusion that her lifting a passage from another source was an exception. The Times has not yet returned a request for comment. 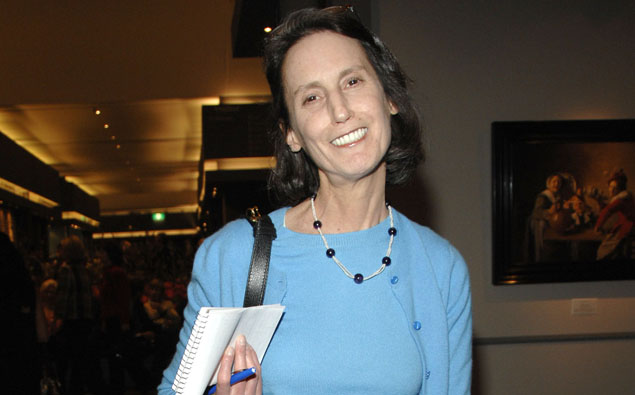