The relationship between Hollywood stars and the reporters who cover them has always been relegated to “it’s complicated” status. Liz Taylor seduced the press; Princess Diana feared the press, while Kim Kardashian invites camera crews to document her while she has her rear x-rayed.

Recently the game changed again. Over the past decade—the span of my employment as a gossip reporter—the definition of a “celebrity” has shifted, no longer being limited to stars. You don’t have to be DiMaggio and Monroe to “make the papers,” as they used to say. Now pregnant teens living in doublewides are cover-worthy.

And the papers themselves? Going fast if not already gone, replaced by blogs like Perez Hilton, which are often run by “editors” who haven’t the slightest idea how to report or fact-check a story.

Meanwhile, the reality is that today’s OK or People reader feels entitled to know everything there is to know about celebrities, which makes churning out nonstop updates on Hollywood’s rich and famous a round-the-clock job. This segment of the media is much hated, of course, but the demand for what it produces is endless.

One subgroup of the gossip industry is particularly loathed, a hardcore group of photographers rumored to include ex-cons and gang members. They latch on to particular celebs and make that person their beat, learning where they live and shop. Sometimes, if there’s a potential newsbreak—a pregnancy rumor or a high-profile break-up—they might follow them around.

In my experience, paparazzi and photo agencies that operate this way are in the minority, whereas the typical pap stakes out a location like The Ivy or the entrance to Good Morning America. Nevertheless, to break news, aggressive behavior is often what it takes. Talk to anyone in celebrity news over the age of 35 and you’ll hear about “the time I jumped out a helicopter while security shot at me,” and “the time I hid in the bathroom at a club all night to hear who was doing drugs.”

As a reader of gossip and entertainment news, you may not like this, but such tactics are what make for good reporting and interesting stories. (Also, something harder and harder to come by these days: the truth.)

Last year, in response to the growing market for news about not just celebrities but their children, a group of prominent actresses, including Halle Berry and Jennifer Garner, pleaded with lawmakers in California to outlaw aggressive paparazzi behavior around kids. Legislatively, this resulted in California Senate Bill 606, which makes it a crime punishable by jail to harass a child because of a parent’s profession, and perhaps more helpful to their cause, produced the spectacle of parents begging lawmakers to protect them and their children from huge, scary, aggressive men. Even scrappy, boundary-pushing celebrity news publishers had to get behind that.

And many quietly did. Without fanfare, a number of celebrity news outlets asked photo agencies not to use those kinds of photographers, especially around children. In my own office, I immediately noticed fewer shots of crying kids and pictures where swarms of photographers could be seen in the background.

The changes were a long time coming. There’s a difference between reporting news and trying to create it by harassing celebrities until they go off, or scaring little kids until they punch you or say something homophobic.

Earlier this year, actress Kristen Bell brought a new tactic to the fight, a “No Kids Policy” that punishes media outlets that run “unauthorized” photographs of celebrity children by restricting access to celebs. If a publication violates the “No Kids Policy,” it and the entire parent corporation run the risk of being blacklisted.

The enforcers of the “No Kids Policy” are some of Hollywood’s biggest publicists. Not every single rep at every single firm has signed on, but a handful of agents, representing several huge names, have taken action against specific media outlets. These agents often refuse to even return calls from reporters trying to fact-check or get comments. Some have withheld all their celeb clients from publications that don’t bend to their demands, citing the “No Kids Policy” as the reason.

It’s not easy to disagree with Ms. Bell, who has called photographers “pedorazzi.” She says she and her husband, actor Dax Shepard, want normal, private lives. Certainly her child didn’t choose to be a public figure. Moreover, her adversary, “the media,” does things that at best step on the ethical line, as I have personally seen during my years in entertainment news, watching reporters desperate for scoops and under immense pressure to sell magazines.

Celeb news is one of the better-paying parts of the media, and it’s practically in the job description: be willing to do slimy things in order to get information on stars. Many years ago I came to an agreement with myself that while I would never lie or break the law, I would go to extreme lengths to get a story.

“But why kids?” you may be thinking. Why not just stop running photos of children? Magazines that have agreed to the policy don’t seem to have lost huge numbers of readers. (At the same time, Ms. Bell and Mr. Shepard’s call to readers not to buy magazines that do run photos of kids hasn’t seemed to catch on either. Readers want to see kids of celebs.)

Access to celebrities is increasingly difficult to come by. Because of social media, celebrities don’t necessarily need the media to communicate with fans, and because social media can also work against them, they aren’t out mingling with the general population at clubs and restaurants as often as in the past. Moreover, thanks to dwindling budgets, most TV shows and print publications find getting enough boots on the ground to report a story a challenge.

Celebrities tightly control their images. If they eat at The Ivy or Nello, they are there to be photographed. They can also avoid being photographed with their kids if they want. Photographers will be the first to tell you: celebrities who don’t want to be photographed, from Julia Roberts to Sandra Bullock to Michelle Williams, rarely are. Others are notorious for finding ways to let photographers know exactly where they will be and when. One famous mom known for being “harassed” with her children frequently takes her kids to parks where she knows photographers are waiting. Another walks her kids to school on the same route every day while constantly complaining about the photographers waiting for her.

Don’t be fooled. Celebrities are good at being beautiful, seeming friendly and looking like good parents who just want to be “like us,” the people who read about them. But celebrities, especially female celebrities, don’t make most of their money on films or even blockbuster summer movies anymore. They make their money as brand spokeswomen for beauty products and fashion labels. They don’t want pictures of themselves looking like haggard slobs all over the Internet, and the last thing they want to be is anything like you. They also believe they should be able to shut down the livelihood of photographers, agencies and those who purchase photos.

We used to have a better system: A-list actors would attend red carpet movie premieres, while photographers snapped away at close distance and reporters had sound bites shouted at them. There were fewer outlets but also fewer barriers between the celebrities and the press who covered them. Today, interviews with celebrities are carefully crafted, with pre-approved questions and access granted only to those who play by the rules. And a publicist is almost always present.

Reporters have no choice: if they want to bring readers information that is unfiltered and real, they have to document celebrities as they live. This newish way of doing things exists in wild, messy, uncharted territory. It’s unruly and in-your-face. However, the symbiotic hand washing that once existed between celebrities and the press is quickly dissipating. Celebrities no longer trust the media, and the media no longer trust the celebs.

There are TV shows, websites and magazines currently getting plenty of access to the stars they want because they abide by the “No Kids Policy.” They also abide by an unwritten code that they will only cover news that is positive or favorable to the celebrities they feature. A reader’s chances of getting an interview that tells the truth are slim. Many publishers and producers are willing to run interviews that have practically been crafted by the stars themselves. And the poor readers! They can’t even look at cute photos of kids to make up for the terrible half-true stories they’re reading.

For those who won’t comply, not just with the “No Kids Policy” but the unwritten rules about only writing things that are flattering, it’s life on the blacklist. And not only are magazines, TV shows and websites hurting because they don’t have enough interviews to fill their spaces. Independent movies, music labels and smaller networks desperate for press around their fledgling shows are being told their top talent won’t talk to 50 percent of the media outlets out there because of this “policy,” hurting those shows’ chances of success.

Ms. Bell did not choose for her daughter to be a public figure. But she did choose a career in the public eye. By attempting to control how the press does its job, she’s attempting to control her image. However, the job of the press is not to protect the powerful, but to inform the public. More than almost anything nowadays, rich and powerful people want to control information about themselves. And restricting access for not playing by their rules is how they do it. 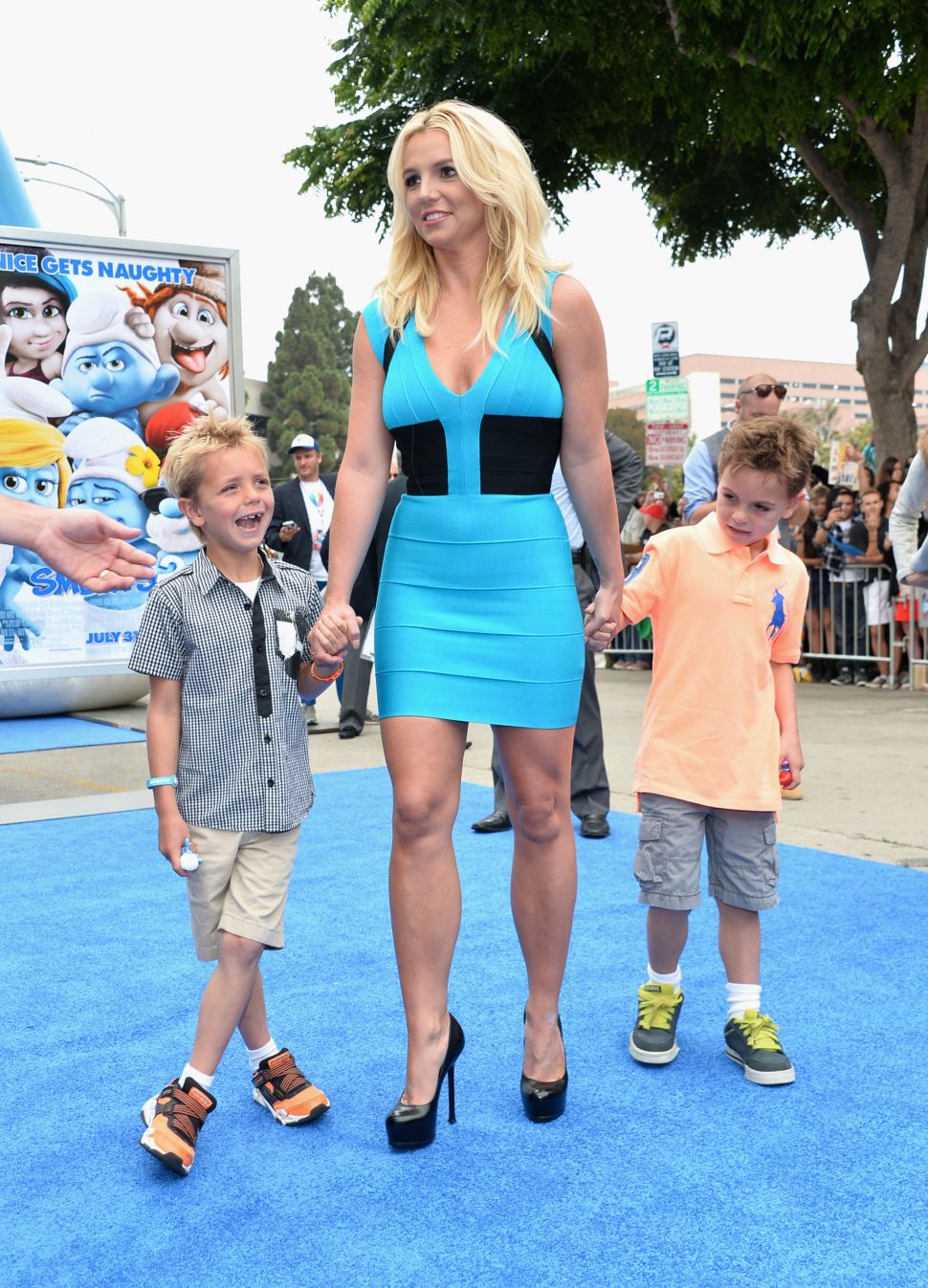