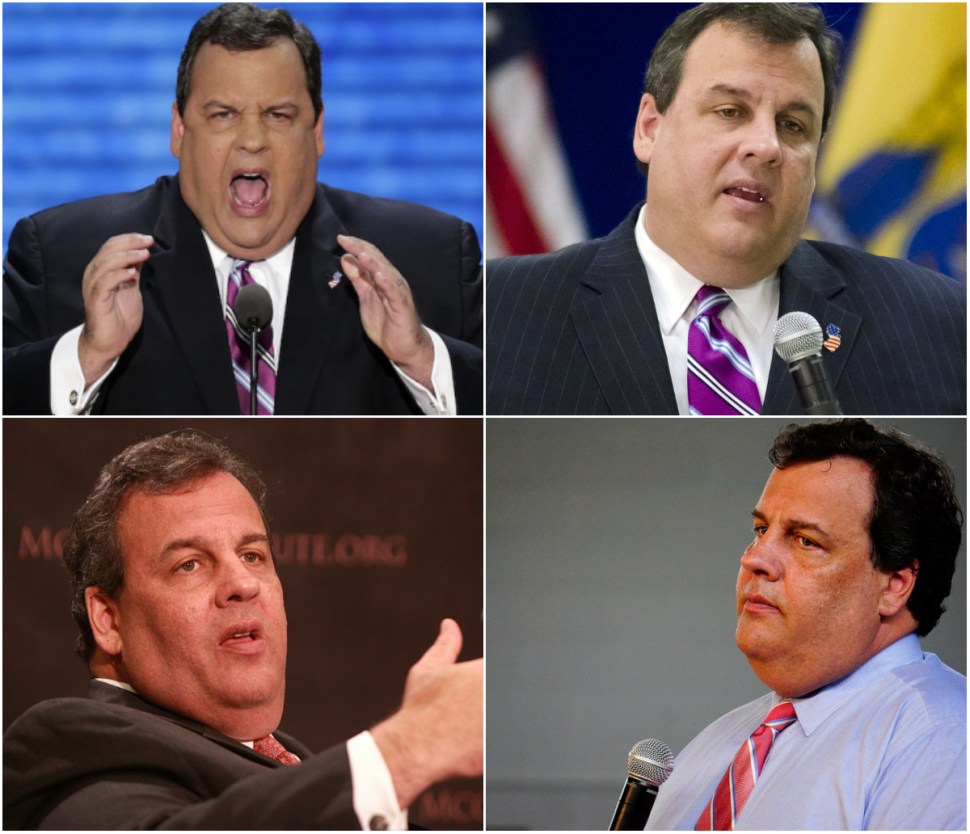 We all know the story: An amiable, even-keeled doctor, in an effort to separate the good from his darker impulses, concocts and consumes a secret potion that, momentarily, induces a metamorphosis of physical and mental being and turns him into a monstrous and unconscionable brute. Things go OK for a while, the doctor reveling in his cleverness and scientific acumen, but the experiment doesn’t last: The doctor soon finds himself unable to control the brute within, changing over more frequently and for longer intervals, until one day he wakes up permanently transfigured and ultimately exacts his own demise.

It’s not quite the same problem New Jersey’s Gov. Chris Christie has, but the allegory that is The Strange Case of Dr. Jekyll and Mr. Hyde does provide some insight into the evolution of one of the biggest political personalities this side of the 2016 presidential primaries.

Before we begin, let’s make something clear: this is not an article about whether the governor suffers from dissociative identity disorder, a modern psychiatric condition that likely served as the inspiration for Robert Louis Stevenson’s original novella. Certainly he doesn’t, and it would be heresy to imply that Christie’s split-personality, which this article does endeavor to explore, runs as deep as the characters’ in Jekyll and Hyde. Christie’s day job is politics, not medicine, for one thing; for another, he doesn’t lead a double life wherein he’s an incorrigible monster who terrorizes local townspeople.

Not literally, at least.

But Chris Christie does have an identity problem. Widely touted as presidential material, yet smelted in the furnaces of New Jersey’s political understructure, Christie is one of the only candidates out of the handful of 2016 Republican front-runners who hails from the northeast, where conservatives are looked upon as too liberal, too haughty, meaning too weird for mainstream GOPers. He’s also by nature a brazen, combative presence, two personality features that don’t necessarily mesh with the humble folk-types that make up a vast majority of the Republican’s voting populace. All of this has forced Christie into a delicate balancing act where, much like Jekyll and Hyde, he’s had to carefully manage a sort of dual personality.

Christie’s recent travels has chairman of the Republican Governors Association — he’s in Arkansas today — attest to this duality. Political observers have noted that the way Christie has carried himself on the national stage is often different than the way the politician carries himself at home, in the hallowed halls of the statehouse in Trenton or in the high school auditoriums and amphitheaters of New Jersey’s political no man’s land. In one place, he plays the role of astute and (sometimes) respectful political emissary, garnering support for fellow governors, shaking hands with potential 2016 voters, or embracing the local culture by munching a few ribs at a popular BBQ joint. At home, however, he’s a bit more free-spirited, prone to viral outbursts and public spats over Bruce Stringsteen with attendees at his signature town hall meetings — all of  which undoubtedly have earned him national attention, but have also forced some to wonder: Is this the kind of behavior becoming of a presidential candidate?

“If he came down to Virginia and pulled the same stunts here — Virginia likes to think of itself as genteel — it just wouldn’t fly,” says Larry Sabato, director of the Center for Politics at the University of Virginia and Virginia resident. Sabato is quick to note that Christie’s antics, while generally accepted by people in the northeast, isn’t an approach that appeals to most voters outside the densely populated, metropolitan region. “That’s not what people expect from this place, in this old dominion,” he says.

It’s a delicate balancing act indeed, made worse so because of how deep the Hyde in Christie’s Jekyll runs. The Republican governor has built a career on the straight-shooting, tough-guy-from-New-Jersey image, beginning as early as his days as an uncompromising U.S. Attorney General. He’s used that image to get legislation passed, such as his recent signing of a controversial bail reform package — a move Christie branded as bi-partisanship but which Patrick Murray, director of Monmouth University’s Polling Institute, argues was not so much about “kumbaya” as it was “about making government work.” He’s used it to defend his administration against criticism, notably during the George Washington Bridge lane closings investigations, and he employs it often during town halls and public radio talk shows, where he’s not afraid to get into it with callers or attendees who dare to question his policy decisions and political sensibilities.

Sabato says Christie will have to leave at least the combative part of that image at home if he wants to make a viable run for the Republican nomination in 2016. “I think people sometimes evaluate it as Chris Christie dealing with the pressures of office,” Sabato says. “But he would not want to take that on the road, even with Republicans. It just wouldn’t necessarily sell. That’s not how they conduct politics.”

But Christie does seem to have had success in keeping his identity as the brash politician hidden when the opportunity calls for the opposite, especially during his RGA travels, which have been extensive this summer. Christie’s traveled to over a dozen primary battleground state since June, each time making headlines and bolstering his reputation as a wiling team-worker and effective fundraiser ahead of 2016. “He seems to reserve that for his own constituents,” Sabato said, referring to Christie’s usual style. “Maybe it’s because he’s been told correctly what flies in New Jersey doesn’t sell in Iowa. They don’t call Iowa a ‘nice’ state for nothing. ”

Murray says it’s all part of Christie’s campaign strategy, organized by people who are “very good at dealing with those things, by kind of saying pay no attention to the man behind the curtain. They are very good at working on the initial image that they created and making sure that’s maintained.”

“It’s an interesting dance that he’s doing. He’s a different person in Iowa and new Hampshire than he is when he’s home,” Murray added. “He’s kind of trying to have it both ways in establishing these messages that seem at odds with one another, with the understanding that right now, the national media is not paying to what he’s doing inside the state of New Jersey. And you have to be very good at handling that.”

Still, like Jekyll, Christie may find it increasingly harder to toe the line between good politician and bad politician the longer he continues the grand experiment, leading the life of New Jersey governor some days and prospective presidential candidate the rest. His RGA tour has not been without hiccups, after all — the governor took serious heat last month after he implied that the campaign of fellow Republican hopeful Rob Astorino in New York was a “lost cause.” And yesterday, he blasted Illinois’ sitting Democratic governor Patt Quinn as “miserable” and “failed.”

In the words of one Rick Wilson, a Florida-based Republican strategist: “Presidential candidates can run on a résumé or on a philosophy. They can’t run just on attitude.”

And that’s the real problem with a Christie presidential primary campaign, according to Sabato, who agrues it all goes back to Christie’s true roots: he’s a northeast conservative with a northeast conservative’s policies. It’s a challenge that every conservative from the region has had to face in Republican primaries going back 50 years, when the northeast was once a GOP stronghold. Sabato notes that Thomas Dewey, the once-New York governor and 1948 presidential contender, was the last candidate to win a Republican primary out of the northeast, and the GOP seems to have only grown more conservative since then. Moreover, Dewey lost against Harry Truman in the general election.

“It’s his policy positions,” Sabato said of Christie. “He’s seen as a northeastern Republican who’s too liberal on some social issues. That’s his problem. He’s not ‘reliable’.”