One of the most interesting races of the season doesn’t involve congress or mayor or future implications for governor, but the presidency of the New Jersey Fraternal Order of Police, where four men face off next week in a town-by-town lodge war to succeed retiring President Ed Brannigan (pictured).

Their shared antagonist is Gov. Chris Christie – but for the moment they’ll settle on one another.

At the heart of the contest stand rivals Steve Demofonte, executive vice president of the FOP; and the man he vanquished, Bob Fox of Cherry Hill, former VP, who’s trying to exact payback.

Retired from the Mount Laurel Police Department, Demofonte took out Fox as the anti-Brannigan candidate.

Now Fox is back for a rematch, in part carrying the standard of his old friend Brannigan, a retired Newark Police officer who after 12 years as NJ prez remains influential as the vice president of the national FOP, and in his old hometown where support is critical.

Demofonte and Fox are not the only two men in the race, though, as Jersey City Police Detective Mark Razzoli and Burlington County’s Pete Alfinito also want the job.

Razzoli’s the only North Jersey candidate among the four.

It’s strictly an internal organization election, where roughly 200 members of FOP lodges from around the state will cast their votes next Thursday in Pennsylvania.

Where Newark goes – 45 votes – could go a long way in determining the outcome, and Brannigan has close ties to the lodge where he served.

A veteran detective in Jersey City, home to 27 lodge votes, Razzoli is not just counting on regional positioning.

He sees himself as the energetic newcomer ready to step over the Demofonte-Fox upper echelon rivalry within the organization.

“We need pension separation,” he told PolitickerNJ. “We are sustainable on our own. We’re a 24/7 operation and we’re being unfairly targeted by the governor. We need a bill with pension separation. I’m not attacking the teacher’s union but the facts are the facts.”

Another cop, speaking on condition of anonymity, when asked if any issues distinguish the candidates, said, “No. We’re all unified against Christie,” who wants another overhaul of public pensions and benefits. 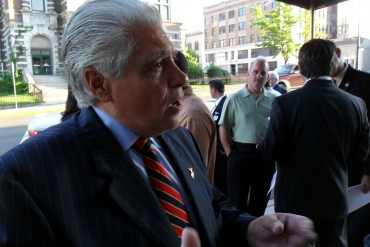