Mayor Bill de Blasio announced today that the city has reached a tentative contract agreement with Teamsters Local 237, which represents school safety agents and special officers. The agreement includes a proposed resolution of a discrimination lawsuit.

The agreement, the mayor said, ensures that the roughly 5,000 predominantly female school safety agents, many of whom have been making $7,000 less per year than similarly employed special officers, will achieve equal pay by the end of the contract. The union had been without a contract since 2010.

“This is a major win for our workforce and our city, providing fair pay to school safety agents and special officers and eliminating the risks of an open contract and open litigation, all while securing unprecedented health savings and protecting our fiscal health,” Mr. de Blasio said.

Standing outside the Cobble Hill School of American Studies this afternoon, Mr. de Blasio said 62 percent of the city’s workforce had agreed on new contracts. Like with other labor deals, the mayor and administration officials said the retroactive raises–providing 10 percent in raises over seven years and a $1,000 ratification bonus–will be paid for by health care savings costs that have yet to be specified. The Municipal Labor Committee and the city have agreed to secure $3.4 billion in health care savings through fiscal year 2018 and $1.3 billion in savings every year after.

After health care savings, the net cost of the tentative Local 237 settlement will be $67.9 million, Mr. de Blasio said. The labor agreement must be ratified by union members and the settlement by courts.

School safety agents filed a class action lawsuit in 2013 accusing the city of paying them less than the special officers who perform similar work at homeless shelters and hospitals. The suit claimed the city violated the federal Equal Pay Act because school safety agents are mostly female. 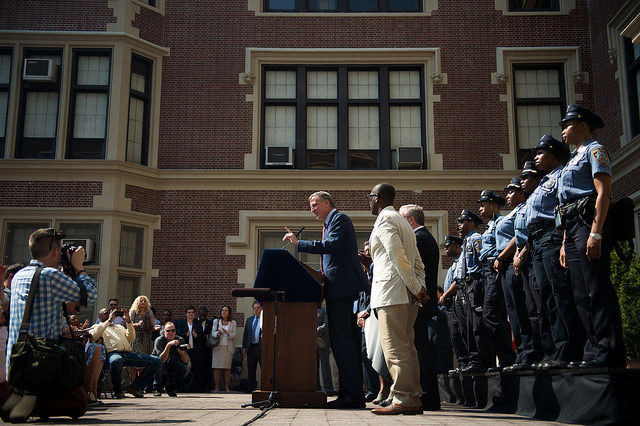