Stretching from the beachfront bars of Mykonos and the promenades of Ibiza Town this summer is a nicer way to enjoy a night out. Going out for a dessert cocktail is a fun way to show off summer finery and check out the social scene. In New York, the trend might owe itself to Las Vegas import The Sugar Factory American Brasserie, where scenesters including Drake, Scott Disick and Alessandra Ambrosio regularly guzzle Cherry Tootsie Pop cocktails, or Pop-Rock-Rimmed, Blow-Pop Martinis. Whatever the inspiration, New Yorkers are flocking to their favorite bars to order a dessert cocktail, and bartenders are happily indulging their audience with exciting new concoctions.

“In the summer, we have a golden hour after work, when diners don’t want to have a full dessert and instead have a liquid dessert,” says Luis Hernandez, head bartender at Bacchanal, the newly opened restaurant on the Bowery from chef Scott Bryan of Veritas and Apiary.

Among the dessert cocktails offered at Bacchanal, one of their most popular is the “Rum Raisin Flip,” served with Appleton reserve rum, PX sherry, hazelnut and dale de groff’s bitters, which tastes like a spiked scoop of melted Rum Raisin ice cream. Creamy, refreshing and boozy enough that you can nurse your cocktail while lounging at their dimly lit bar, outfitted in sleek copper and leather.

Mr. Hernandez is also serving up an off the menu “Boozy Cream Soda,” inspired by “the fat kid inside me,” he said. The cream soda is made with seltzer, vanilla-infused bourbon syrup and Bulleit bourbon, topped with cream and bourbon-soaked cherries. The cocktail is a dream in a glass, and is light enough that you don’t feel like retiring home with a dessert coma, but perhaps ordering another, or continuing the dessert cocktail party elsewhere. And, lurking beneath the sweetness is a whole lot of booziness.

To keep the dessert cocktail train moving, Donna in South Williamsburg has created the perfect highbrow-lowbrow Pina Colada, called the “Brancolada.” “All the bartenders drink it,” says Matthew Houlihan of East Williamsburg speakeasy Featherweight. Served with Branca Menta, coconut Appleton rum and pineapple, the “Brancolada” arrives in a short frosty glass filled with creamy folds of slush pumped from the nearby frozen drink machine. While not altogether “desserty,” the drink packs just the right amount of pineapple-coconut-rumminess that will send you traipsing onto Donna’s dance floor, drink in hand.

Further along Bedford Avenue is DuMont Burger, the Williamsburg hotspot that some consider to be the originator of the spiked milkshake. While many spiked milkshake copycats have arrived on the scene since the arrival of the “Boozy Shake,” none is decidedly as thick, creamy or boozy as DuMont’s. The boozy shake flies off the counter “especially on weekends, and at nights,” says server Krystal Vargas and co-creator of the off the menu “Strawberry Daquiri Shake” (served with strawberry ice cream, black rum and triple sec).

“People have to order the shake before the burger. If there’s no shake before the burger, it’s kind of weird for them,” says Ms. Vargas of the leading role the boozy shake plays in the overall DuMont dining experience. While DuMont’s most popular flavor is the “Maple Bacon Bourbon” shake, served with vanilla ice cream, maple syrup, Old Forrester Bourbon and bacon, the “White Russian” (vanilla ice cream, Kahlua and vodka) is equally formidable and will have you giddily bouncing to the rap-heavy beats that blast regularly through the speakers at DuMont.

Not all dessert cocktails need bells and whistles, the classics are best left (mostly) untouched. Such is the case at Saxon + Parole (which was recently awarded Best Restaurant Bar at the Cocktail Spirited Awards), where bartender Max Belsand is routinely shaking up classics with a subtle twist, the most popular of which is the “Grasshopper” (made with crème de menthe, crème de cacao, heavy cream and heavily sprinkled with Valrhona chocolate shavings).

If you’re after a restaurant of dazzling proportions in the food and cocktail department, then cab over to Beauty & Essex on the Lower East Side. Beauty & Essex serves a multitude of exquisite cocktails, including several that err on the side of lip-smackingly sweet. Foremost among their selection is “The Book Burner,” prepared with scotch-bonnet cherry-infused rum, maraschino liqueur, grapefruit and sour cherry jam. The cocktail tastes like a boozy cherry pie, whose sweetness is offset by the tartness of the grapefruit. And if it weren’t for the sultry atmosphere inside, you might think you were beachside in Barbados sipping Mount Gay rum.

As with everything else in New York, when it comes to searching out dessert cocktails variety abounds. The fun lies in dragging friends out with you on the hunt before summer nights close in. 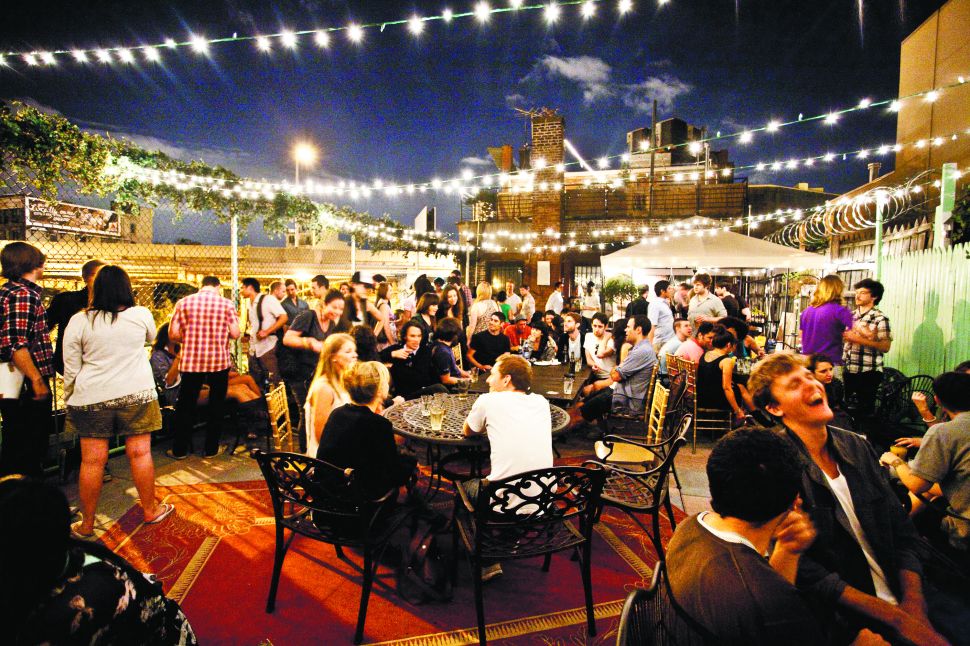