Mr. de Blasio cited Mr. Dorancy’s two decades of work at the Department of Education as a key reason for endorsing him for the central Brooklyn seat in his race against Mr. Hamilton–a former aide to Mr. Adams once seen as his heir apparent.

“Rubain Dorancy is the education candidate for State Senate. As a veteran educator, he understands that better schools are the answer to the twin challenges of opportunity and safety. We have worked together to win high-quality universal pre-K for every child and after-school for every middle-schooler,” Mr. de Blasio said in a statement. “I am supporting Rubain Dorancy because he is the best progressive choice for State Senate.”

Mr. Hamilton–a longtime Democratic district leader–has the backing of Mr. Adams and much of the Kings County Democratic establishment, and a source told the Observer that the mayor’s choice to back Mr. Dorancy is a snub of the borough president and his effort to determine his own successor.

“This is definitely a smack in the face from Bill de Blasio to Eric,” said the insider, who is not attached to either of the campaigns for the open seat, told the Observer.

Mr. Dorancy has the backing of central Brooklyn power broker and former councilwoman Una Clarke, who was an early supporter of Mr. de Blasio in last year’s mayoral race and supported him in his bid for public advocate. By endorsing Mr. Dorancy, the source noted, Mr. de Blasio has returned the favor.

Mr. Dorancy also has the support of 1199 SEIU, a union close to Mr. de Blasio and his allies in the City Council’s Progressive Caucus. Last week, Councilman Jumaane Williams and Councilman Antonio Reynoso–both leaders in the caucus–announced their support for his campaign.

Mr. de Blasio’s and Mr. Adams’ offices did not immediately respond to requests for comment. 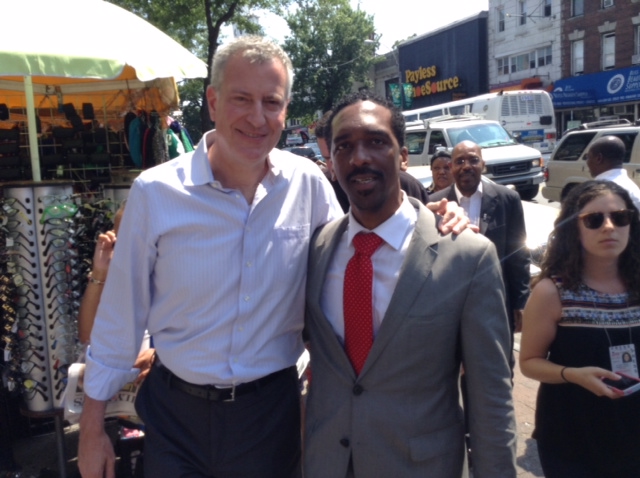