Mayor Bill de Blasio brushed aside scathing comments from police union leaders who slammed officials for not supporting cops and the medical examiner’s office for ruling the death of Eric Garner a homicide — calling the rhetoric “nothing new.”

Mr. de Blasio and Police Commissioner Bill Bratton have vowed to retrain all of the city’s cops in how to approach using force and other issues in the wake of Mr. Garner’s death, which the medical examiner’s office ruled a homicide caused by the use of a chokehold. Police Benevolent Association President Patrick Lynch slammed that decision as “blatantly political,” but Mr. de Blasio praised the office’s work.

“I have a lot of respect for the medical examiner’s office in New York City. It is the gold standard in this country for the work they do, the science they use to come up with their answers, and I think that should be respected in itself,” Mr. de Blasio said.

The police union bosses also took issue with the characterization by the mayor and commissioner of the move used to take down Mr. Garner as a chokehold, which is against NYPD regulations — but promised to follow all the city’s rules for cops, whatever the consequences.

“So going forward, members of the NYPD, we want you to do your job we want you to follow the rule book the way it’s written, and if there’s a delay in getting to the next place, so be it,” Sergeants Benevolent Association president Ed Mullins said.

In response to that comment, Mr. de Blasio said police officers need to serve the people of the city.

“I think every law enforcement official, every officer has to serve the people of this city. I think he vast majority of the men and women of the NYPD and all the uniformed services take that very, very seriously,” Mr. de Blasio told the Observer. “If some individuals don’t, that’s a problem for us — because we need people to go out there and do their jobs and do them well. There’s no contradiction between doing your job effectively and respecting the people you serve, and that’s very clear in the rules of the NYPD.”

Pressed by another reporter for his thoughts on the comments, which could be interpreted as a call for an NYPD work slowdown, Mr. de Blasio said he was more concerned with the attitudes of rank and file cops.

Despite the aggressive tone from the union officials — who blasted the inclusion of Rev. Al Sharpton in City Hall discussions of the case and called on the mayor to “unequivocally” say he supports police — Mr. de Blasio said he wasn’t concerned about the tenor of the debate.

“I wouldn’t overrate any one moment. I really wouldn’t. We’re on a much bigger track here. We have much bigger work to do,” Mr. de Blasio said.

People of the city deeply respect police, he said, and rely on them — but there’s also room to do better in the wake of incidents like Mr. Garner’s death. 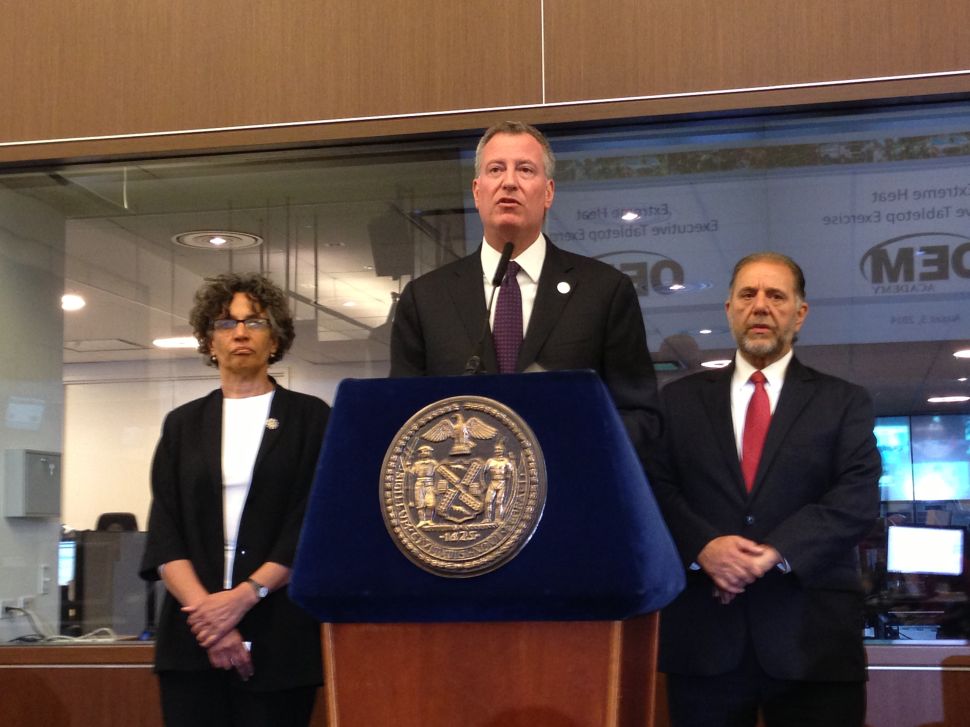