While several members of Congress have called for a federal prosecutor in the death of Eric Garner in NYPD custody, Mayor Bill de Blasio said today he believes Staten Island District Attorney Daniel Donovan is capable of leading the investigation.

“I personally have not spoken with the district attorney,” Mr. de Blasio told the Observer at an unrelated press conference at City Hall. “I know him a bit. I respect him. From everything I can see, he is taking it very seriously and doing his job.”

But that sentiment wasn’t shared by six members of Congress, who wrote a letter last week to Attorney General Eric Holder requesting a federal prosecutor take over the case.

“There is no indication that the local district attorney is prepared to aggressively prosecute this case,” the letter read, according to the New York Times. Activists have also slammed the pace of the investigation.

For now, the investigation remains in the hands of Mr. Donovan, a Republican who has served Staten Island since 2004.

“What we’ve said repeatedly is, if the federal government makes the decision to become involved, we will cooperate,” Mr. de Blasio said. “But right now, this is in the hands of the district attorney, and I think he’s obviously a capable person who is taking it seriously.”

Mr. Garner, 43, died after police used an apparent chokehold while trying to arrest him for allegedly selling loose cigarettes. The medical examiner’s office has ruled the death a homicide, but so far no charges have been filed.

Mr. de Blasios’ defense of Mr. Donovan was perhaps less full-throated than that offered by several of the district attorney’s fellow Staten Island Republicans last week, who have worked more closely with him over the years.

Councilman Vincent Ignizio, the minority leader, penned an editorial in the New York Post arguing there was no reason to take the case from Mr. Donovan. Borough President James Oddo told the Observer there was “not one iota of a reason” to question Mr. Donovan’s ability to handle the case; in a statement, Congressman Michael Grimm blasted his congressional colleagues for what he called a “baseless, political attempt to undermine the authority, competence, professionalism, and demonstrated expertise of District Attorney Donovan.” 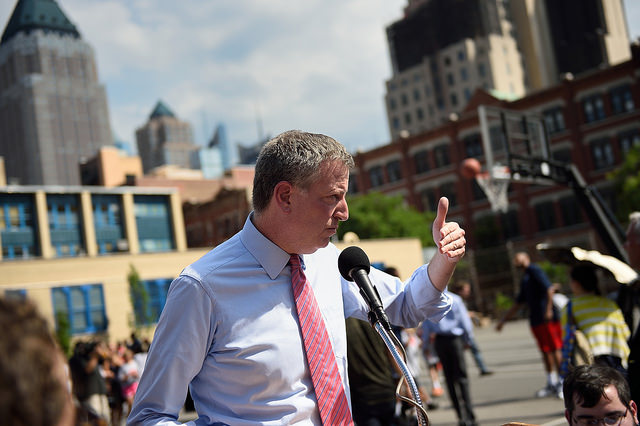