Police Commissioner Bill Bratton’s poll numbers took a hit after the death of Eric Garner, but Mayor Bill de Blasio said he expected that to change as people got to know his work better — and put some of the blame for the lackluster numbers on his predecessor.

“I think it’s going to be a process here over the coming months and years to create the kind of relationship between police and community that the community deserves and the police deserve. It has to be a two-way street,” Mr. de Blasio told the Observer at a Manhattan press conference. “It’s going to take real work to do that. When that work is done, I’ll be looking forward to what the poll results are then.”

But despite Mr. Kelly’s consistently high approval rating — which reached its zenith in January 2013 at 75 percent — Mr. de Blasio still attributed some of the disapproval for Mr. Bratton to the policies of the administration that preceded him.

“Commissioner Bratton received an unfortunate set of circumstances where the relationship between police and community had become more troubled because of the overuse of stop and frisk — among other factors, but the number one to me was the overuse of stop and frisk — so Commissioner Bratton has and to clean up a problem left to him, and I think he’s been very purposeful in doing that,” Mr. de Blasio.

Mr. Kelly’s record-high poll numbers in 2013 came amid considerable debate over the use of stop-and-frisk, which became a major issue in that year’s mayoral race. Throughout Mr. Kelly’s entire tenure as police commissioner — including in years when the use of stop-and-frisk was considerably higher than it was at the end of his tenure or is today — Mr. Kelly’s approval rating never dropped below 52 percent, according to Quinnipiac.

Mr. de Blasio also reiterated comments made by Rev. Al Sharpton, who appeared with the mayor at a public housing press conference today, about Mr. Bratton’s successful tenure as police commissioner in Los Angeles. Mr. de Blasio said the relationship between police and residents was “at an all-time low when he took over” in California.

“The police approach to the community in Los Angeles was positively wrong and negative. Police Commissioner Bratton went in and in seven years turned that upside down,” Mr. de Blasio said.

Today, police there reach out to the community immediately about any crisis that may occur, Mr. de Blasio said.

“Commissioner Bratton deserves the praise and deserves the credit for what was achieved in L.A., and he’s already dong the same things here,” he said.

Despite reported tension between the two, Mr. Sharpton also had kind words for the police commissioner during the press conference — though he noted they did not speak when Mr. Bratton served during the Giuliani administration. In addition to highlighting his work in Los Angeles, Mr. Sharpton praised the police commissioner for saying the maneuver used in Eric Garner’s death appeared to be a prohibited chokehold.

“This commissioner stepped out there, with all this rhetoric from others, and took a position. I think that that showed a difference. Does that mean we’re getting married?” Mr. Sharpton asked. “No. But on that night, we could’ve gone to dinner.” 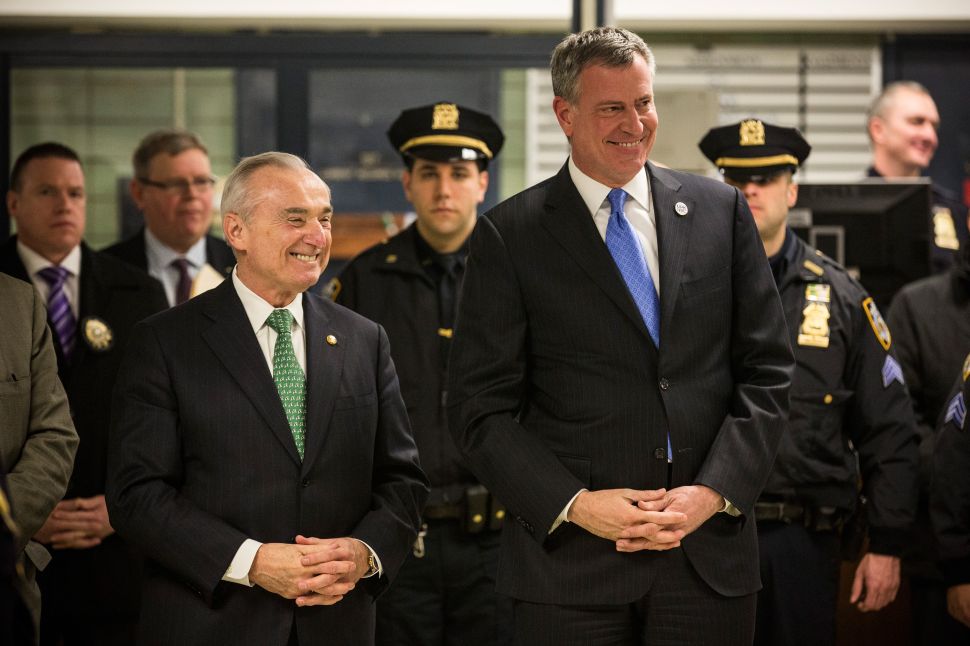