Peter Capaldi is the 12th Time Lord. (BBC One)

Turn and face the strange changes. Every time I think I’ve figured out what Doctor Who is all about, the Doctor goes and gets himself a new face and a new persona, upending all of my theories in a flash.

That’s the whole point, of course. The hydra-headed Doctor Who lives and breathes with the times—and with the actors who step into its central role. And perhaps each era, each new wave of fans, gets the Doctor it deserves.

About halfway through this Saturday’s season premiere, the new Doctor (the estimable Peter Capaldi) speculates that when he regenerates into a new body, he subconsciously chooses his new face from all of the faces he has seen over the course of his very long life. Staring at his reflection, disoriented and alone, he wonders what he is trying to tell himself in choosing a face that is so weathered and gray—so different from the floppy-haired boy he’s been for the last few seasons.

Later on, once again looking at himself in a mirror, he has reason to ask an even more difficult question. He is talking to a robot that has been slowly replacing its parts with human tissue for thousands of years, and he poses to it (and to himself) this riddle: If you replace the handle of a broom, and then later replace the head, and do that over and over, in what sense is that broom still the same broom?

By the episode’s end, he has a sort of answer to both questions. He tells companion Clara: “I’ve lived for over 2,000 years. I’ve made many mistakes. It’s about time I did something about that.” A broom is not a person: It doesn’t bear responsibility for the things it has swept or not swept. But the Doctor, though he may be in a different body, is still the same man who made all those old mistakes.

Post-regeneration, he wears those errors in the lines on his face and in the gray in his hair. What is this new face trying to tell him? The same thing it is trying to tell Clara, and us: That flirty, reckless boy is gone. Doctor Who has become a different show, at least in part. It’s time to put some of its silliness behind us, and proceed into the difficult, messy work of taking responsibility for the past.

But before we can get there, The Doctor has to remember that past. And at the episode’s start, he is basically a newborn, helpless and perplexed, memories hazy. He doesn’t even know how to operate the Tardis which, flying blind, gets lodged in the throat of a T-rex and carries it along to 19th century London. There, the Paternoster Gang—Madame Vastra, Jenny and Strax—are brought in to investigate the dinosaur in the Thames. They figure this particular puzzle out right quick when the beast coughs up a blue box.

The Doctor can speak the (female) T-rex’s language, and knows she is just as terrified and out of place as he feels. He makes a promise to bring her back home—just in time to see her burst into flames.

Now in full Sherlockian mode (Vastra later refers to her informants at the “Paternoster Irregulars,” just to drive the point home), he agrees to take the case of the murdered dinosaur. But who could have done this? And how? “You’re not asking the right question,” the Doctor’s eyebrows mutter. “The right question is, have there been any similar murders?”

A question which a shocked Madame Vastra answers in the affirmative. People all over London have been spontaneously combusting, which Vastra speculates is a cover for whatever the murderers have been taking from the bodies.

These murderers are the maintenance robots of the 51st-century SS Marie Antoinette—sister ship to the SS Madame de Pompadour, where a similar crisis happened in “The Girl in the Fireplace.” The Doctor gets one heck of a case of déjà vu, but he can’t quite remember the old story. Which, basically: The robots were out of raw materials with which to repair themselves, so they started taking the parts they needed from human beings.

This other ship was somehow sent back millennia in time and has been taking what it needs from animals and people since then, nowadays disguising itself as a cheap London Italian restaurant. Clara and the Doctor are separately lured there by the same classified ad (which they each think was placed by the other), and nearly mined for spare parts. But Clara manages to hold her breath—the automatons can’t tell they’re human until they breathe—and then bravely face down threats of torture long enough for the Doctor to figure out what is going on and swoop in to save the day.

The head robot makes it to an escape pod, a hot-air balloon sewed from human skin, but the Doctor follows and tries to convince it that its pursuit of an imaginary “promised land” is just a stupid idea it picked up along the way, a side-effect of the stolen human brains it has been using to think for so long. And thus its life is meaningless, and it may as well kill itself. “Self-destruction is against my basic programming,” it says, to which the Doctor responds, “Murder is against mine,” but adds that one of them must be lying. And when the robot falls from the sky, we do not know whether it jumped or was pushed.

The big story arc of the season is also introduced, as it turns out that the robots didn’t place the ad in the paper that drew them both there, but rather some unknown party did. And the Doctor suggests that it may have been the same woman who gave Clara the Tardis’ phone number, which threw them together in the first place. Someone, he says, has gone to a lot of trouble to make sure that the two of them met and stayed together. And then we meet that someone, a woman named Missy, who refers to the Doctor as her “boyfriend,” and then welcomes the now-dead robot to a garden that she calls paradise.

But all of this is peripheral to the main focus of the episode, which is to make sure that Clara is still the Doctor’s loyal companion despite the fact that he is not a flirtatious young man anymore. Vastra reminds her that no matter how young he looked before, he was always this ancient, unfathomable thing: “You might as well flirt with a mountain range.” And back on the redesigned Tardis (Clara: “I don’t like it.”), a glowering #12 cautions Clara that “I’m not your boyfriend.” She protests, but the message is clear: If you’re still in for the journey, you’re in because of who I am, not who I was.

Which is slightly undermined by the fact that Clara is on the fence until she gets a phone call placed through time from the about-to-die #11, who explains that as scared as she is, #12 is even more scared, and he needs her. (And I know, timey-wimey, whatever, but if someone from the past can make this precise a phone call into the future, wouldn’t they have been able to avoid a whole lot of this show’s misunderstandings?)

When she hangs up, the Doctor says all he wants is for her to really see him—to acknowledge that the person she just got off the phone with is the same person standing before her. She responds with a heartfelt hug.

Which the Doctor is awkwardly, and hilariously, unable to return, because “this new body is apparently not a hugger.” And one last thing that should be said is that despite the fact that this episode announces a much less campy (and, if I’m not mistaken, considerably higher in production value) version of the show, this did not make it any less funny. On the contrary, I laughed harder than I have at a Doctor Who episode in recent memory. Capaldi’s comic timing is exquisite, and everyone else seems to have stepped up their game in response. Except for Strax, of course, who was already as funny as a potato could possibly be. 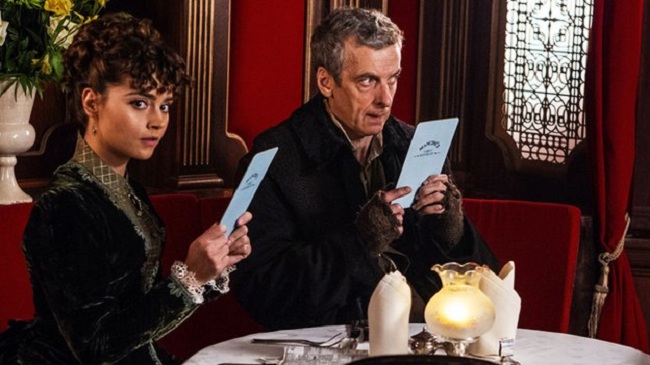