At a candidate forum hosted by Brooklyn Independent Media, Mr. Hamilton–a Democratic district leader and former aide to Mr. Adams once seen as his heir apparent–continued to try to cast Mr. Dorancy as an outsider and an ally of the Bloomberg administration. Talking about school policy, Mr. Hamilton blasted former Mayor Michael Bloomberg’s record of supporting charter schools, co-locations, closures and allegedly reduced parental input–a record that he argued Mr. Dorancy, a former Department of Education administrator, was partially responsible for.

Also present at the debate was long-shot contender Guillermo Philpotts, a former candidate for state office.

“Under the failed Bloomberg administration, they took away the parental involvement component,” said Mr. Hamilton. “The policies under the previous administration, which Mr. Dorancy was a part of, have failed our students.”

Mr. Dorancy struck back, noting he had worked in Department of Education for two decades, predating Mr. Bloomberg’s election. He also argued that he had played a part in reforming the leadership of the local community school board at a time when Mr. Hamilton was getting his law degree.

“You were studying for the bar then,” said Mr. Dorancy, inviting viewers to float his name at neighborhood schools. “Ask about me, and you’ll find out I’ve led a legacy in the Department of Education. Bloomberg did not make me, I am my own man!”

The two also butted heads over a question from a constituent, who remarked that many locals are dropping out of school and “living recklessly.” Mr. Dorancy took issue with the claim.

“When we know we have a high percentage of our children failing in our school system, under the Bloomberg Administration, I don’t understand what this conversation is about, how our children are doing so well. They’re not doing as well as they should be,” said Mr. Hamilton.

Mr. Hamilton also repeatedly stressed the issue of residency in the contested central Brooklyn turf, echoing his longstanding claims that Mr. Dorancy–who grew up in the district, but at one point was registered to vote at an address outside of it–is a newcomer. Mr. Hamilton unsuccessfully sought to have Mr. Dorancy removed from the ballot last month on the grounds that his rival’s real permanent address was in a neighboring State Senate district.

“First off, I live in Crown Heights. My wife and I have been there with my children for 30 years, continuously,” Mr. Hamilton said.

Mr. Dorancy retorted shortly afterward, in a discussion of the redevelopment of Empire Boulevard, a major area thoroughfare.

“I live six blocks away from it, in Crown Heights,” Mr. Dorancy said with a grin and a glance at Mr. Hamilton, before rattling off a list of consecutive neighborhood streets where he had walked and talked to people. “Sorry, I don’t want to crush you here.”

His opponent came back with an equally sharp response.

Mr. Dorancy also took shots at Mr. Hamilton’s understanding of immigration policy. When the former counsel to Mr. Adams said that the Dream Act would grant financial assistance to foreign-born college students, Mr. Dorancy carped at him, pointing out that the bill would in fact allow aid only to undocumented collegiates.

“The issue of the Dream Act is not having been born in another country. It’s critical that we focus on these issues and make sure we are familiar with them,” Mr. Dorancy said, before vowing to pass State Senator Gustavo Rivera’s New York Is Home Act–and goading Mr. Hamilton by not explaining the details of the amnesty legislation. “I’ll let some of you do research on it so you know what it is.” 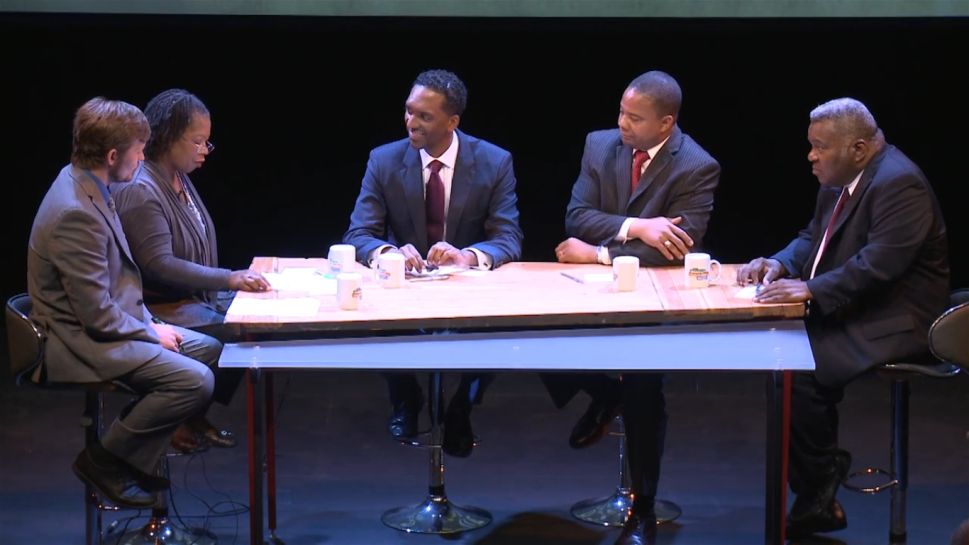