Vinnie: It really amuses me to no end that you have not one but two guys nominated, not for the first time mind you, for playing a slightly more ridiculous versions of themselves — CK and LeBlanc. It amuses me even more that neither have won for doing so. This year, LeBlanc has a better chance because as good as LOUIE is, CK doesn’t really do a whole ton of acting on it. I don’t think there’d be much of a difference if someone just followed Louis CK around the Lower East Side for a month with a camera.

But in the grand scheme of things, I don’t think either really has a chance. I can’t speak much for Cheadle or Gervais’ performances this year (besides that I wish Gervais was hosting just for pure cheekiness), but what I CAN say is PLEASE DEAR LORD NOT JIM PARSONS. He’s already won three times for this role, back to back in 2010 and 2011. BUT WHY? If it is one thing I will never understand it is the universal love for The Big Bang Theory. Actually please, someone out there who is in on it, go down to the comments and explain to me the appeal of that show. I’ll wait.

The funny thing about Lead Actress is that out of the many, many fine women nominated for Orange is the New Black I think Taylor Schilling is the least likely to win. I think we all know by now Piper Chapman is something something Trojan Horse but I don’t think we needed to know that to realize that she is the least interesting person on that show.

Lena Dunham should definitely, definitely win. Oh, not for GIRLS, but for that crazy lipsync to Sia’s Chandelier on Seth Meyers. Who is hosting which means they should totally do that again.
[youtube https://www.youtube.com/watch?v=Sj757ishXnQ]

Drew: Look Vinnie, I think you need to check your work because you spelled SO MANY of these shows wrong!

Molly: If Julia Louis-Dreyfus doesn’t win, I hereby sentence all voters to a lifetime of Mike and Molly reruns.

I mean really, how is this even a competition? Who can compare?
Also, I think Louis CK will prob win for actor… It seems like there was an unspoken agreement this year that he became part of the canon of “respected male entertainers.”

And Julia for actress!

Drew: I don’t know you guys. Sometimes it’s the most unlikely of candidates…

The really sad part is that we know who is going to win and we’re gonna all be like “Damn, should have seen that coming.”

Jack Smith: Ricky Gervais should take it for Derek. If you didn’t cry like a brat at nearly every episode, there’s something wrong with your eyes. Besides, he took an opportunity to not play a smarmy, wailing, god-hating sociopath for a single TV-show/movie, and we should reward that behavior.

Sarah Devlin: I am saying Julia Louis-Dreyfus again for Veep  (because she’s still on fire right now). Also, Melissa McCarthy needs to stop getting nominated for Emmys based on her movie performances.

Drew: What movies are you referring to, Sarah? Tammy? 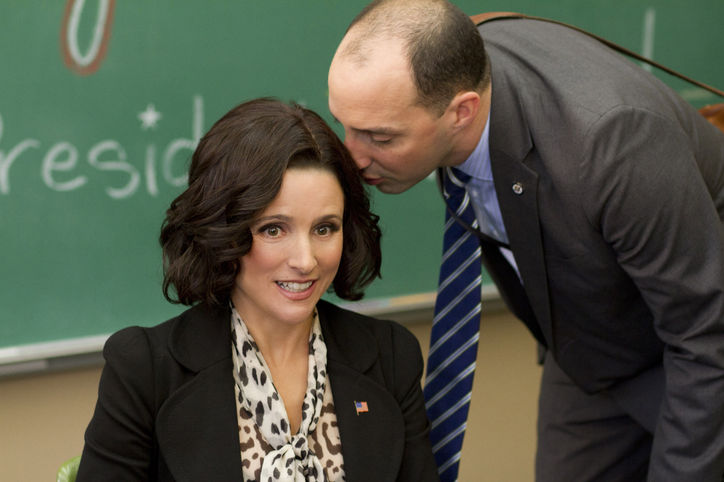