At a debate on Brooklyn Independent Media, Mr. Dilan’s primary opponent Kimberly Council–who also unsuccessfully ran against Mr. Espinal for City Council last year after Mr. Dilan was term-limited out of the seat–attacked the veteran pol for trying to swap jobs with his former staffer.

After working for Mr. Dilan, Mr. Espinal entered the Assembly after winning a 2011 special election to replace longtime Assemblyman Darryl Towns, who took a job in Gov. Andrew Cuomo’s administration. Mr. Espinal won re-election in 2012 but left the seat to run for and win Mr. Dilan’s open council seat in 2013.

“Musical chairs is a fun game when we’re kids at a party. But it’s not fun in politics. It’s time for fresh leadership,” said Ms. Council, a Wall Street law librarian.

But Mr. Dilan argued he alone has a track record in the Assembly district–which overlaps considerably with his former council seat–of creating jobs, improving public safety and building affordable housing. The candidate argued that the process of politicians trading elected offices is completely democratic.

“There was a reference made to musical chairs. But in my mind it is not truly a musical chairs game when the people decide who they want to sit in that seat,” said Mr. Dilan. “There’s no other choice but to vote for Erik Martin Dilan.”

Mr. Dilan is the son of State Senator Martin Dilan, and both Dilans and Mr. Espinal are old allies of former Assemblyman and Brooklyn power broker Vito Lopez. Ms. Council is running with the support of the Working Families Party, which also backed her for City Council last year.

Ms. Council gave a shout-out at the end of the debate to another failed 2013 candidate for Mr. Dilan’s vacant Council seat, Helal Sheikh, who is now running on a slate with Ms. Council and challenging Mr. Dilan for his position as district leader. Mr. Sheikh suffered an embarrassment during last year’s campaign when the PIX 11 program Help Me Howard criticized him for owning an insect-infested apartment building and refusing to return a tenant’s deposit.

Mr. Espinal and Mr. Sheikh did not immediately respond to requests for comment. 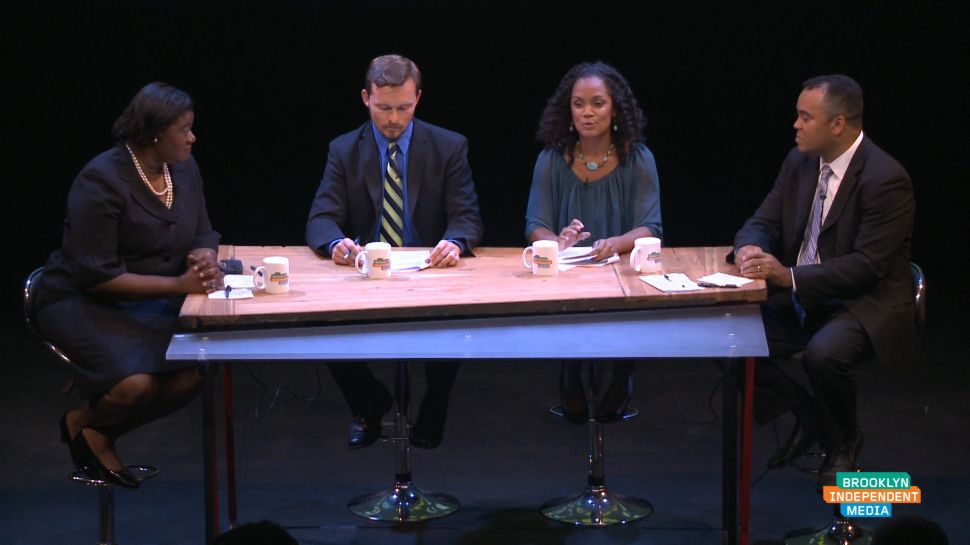