‘What on Earth is Wrong?’ is right! I’m pretty sure the writers put together this week’s episode of Extant with exactly this mantra in mind: Everything goes wrong for everyone.

I bet you’re wondering: Does everything go wrong for Molly’s baby?

Yup.The 15 week, mysteriously conceived (questionably human) fetus has been removed from Molly’s womb without her knowledge and is now being kept alive in what looks like a hollowed out foosball table filed with glowing red goo. Sucks to be him. That’s right, I said him. We still have no idea why the ISEA implanted an embryo in Molly, admitted that they did it, and then secretly aborted it, only to keep it alive in a crimson incubator, but we DO know that it’s a boy. I don’t quite remember being in the womb but I would bet my bottom dollar that it’s way better to hang out there for 9 months than in a vat of neon liquid while ISEA officers stare at you all day. Is it going to have three belly buttons?

What about creepy robot Ethan? Does everything go wrong for him?

Yes, actually! Really wrong! He’s in a coma! Though he somehow manages to maintain that now infamous creepiness while in this robot version of a coma (but that might just be because he’s laying in what looks like a tiny bathtub and is unnecessarily naked for the entire episode). After having his battery turned off by the ISEA in last week’s episode, Ethan was left for dead in the woods. During this time, the computer inside of him completely shut down. John and Julie explain the complicated nature of a robot coma in overly-wordy TV medical jargon and though I have no idea what they were saying, I was able to deduce that Ethan could potentially be “reset” by the coma and have no recollection of his former life. Like permanent robot amnesia (ed. note: this all sounds suspiciously to me like the time my iPhone turned off and I lost all my contacts). Should have stored his memories in the Cloud.

That is bad, but perhaps things are getting better with Molly?

Nope. Things are getting worse. After waking up from a nightmare in which she is married to Marcus and her orange juice inexplicably sludges around in her glass, Molly finds herself in the hospital where doctors tell her that she is not pregnant. This is confusing to her because she is pregnant. Or she was. You see, the ISEA sedated our poor Molly and removed the embryo using the terrifying laser-slicer I mentioned last week. On top of no longer being pregnant, doctors tell her that she hasn’t been pregnant in years. This sucks for Molly because now everyone thinks she’s crazy. Or crazier. Before all this she was merely hallucinating dead people and talking to them as if they were real. John begins to doubt that his wife was ever pregnant and reasons that Sam is the only one that can convince Molly she needs help.

That’s really bad! At least she has her best friend Sam to back her up, right? Did she show anyone the ultrasound?

Actually, no. Sam was blackmailed by Alan Sparks in last week’s episode and now pretends she had no idea about Molly’s pregnancy. She hops on the “Molly, you’re crazy” bandwagon and Molly furiously storms off. John and Molly discuss why Sam would be lying. Molly thinks it’s because the ISEA got to her but John comes to the conclusion that Molly hallucinated the baby just like she hallucinates everything. This makes Molly really mad which she indicated with yet another long, wide-eyed stare before storming off (again). Honestly, Sam is probably a hallucination too.

So then everything is going wrong for John too then, huh?

Big time! John’s life sucks! First he finds out that his wife is not pregnant and his humanoid son is in a robot coma. Then he begins to suspect that his beloved wife is more insane than previously suspected and later learns that the alleged baby was not biologically his. “Things were less stressful on E.R”

Side note: At this point no one is even talking. The whole show has become one big, long, saucer-eyed staring contest played to tense background music.

So, I’m assuming everything is also wrong with Julie?

Julie’s life may be the suckiest of them all. At the top of the episode, Julie is in bed with a colleague but it’s immediately evident that she would rather be with John. But if you recall, John is a top contender for the Husband of the Year award now that Molly is back from her solo mission. This is upsetting because while Molly was away, John and Julie built Ethan together and they developed a weird sort of family, both feeling paternal instincts toward their creepy baby robot. I’m pretty sure this is around the time that they slept together. OK, I admit that is still purely speculation, but come on. They had to have done it! How else can you explain those pouty, longing stares she defaults to the moment John walks away? Aside from A) being in love with someone who doesn’t love her back and B) dealing with the morning after regret of sleeping with her idiot co-worker in an attempt to remedy her longing for John, we also find that C) Julie does not have legs. Like, she literally does not have legs. That’s not a figure of speech or a metaphor. She does however have a super future-y floating chair that holds her while she showers, so at least that’s cool.

To make matters worse, Julie gets a phone call explaining that Ethan is in critical condition after having his battery turned off in last weeks episode. She rushes into the lab and furiously erupts at John, accusing him of being negligent with their precious Ethan. But this is the episode where bad stuff happens to everyone, so instead of getting through to John he basically tells her to mind her own bee’s wax by reminding her that she is neither Ethan’s mother nor his business partner. (NOR – and I’m totally adding this, any other kind of partner). Yikes. “I would give an arm and two legs to be with you, John.”

So everyone is swimming in their own pond of suckage until, miraculously, Ethan wakes up. Molly and John are a little happier and take him home. After tucking the little creep in to bed, they head down stairs to do some more complicated SCI-FI stuff on a computer. Molly and John discover a mysterious blue energy, unable to be seen with the naked eye, that infiltrated Molly the moment she became pregnant in space. The couple looks confused and bewildered for an inordinately long time, indicating that there will be no explanation for any of this until next weeks episode. Which, for reasons I still cannot fully understand, I will anxiously await. 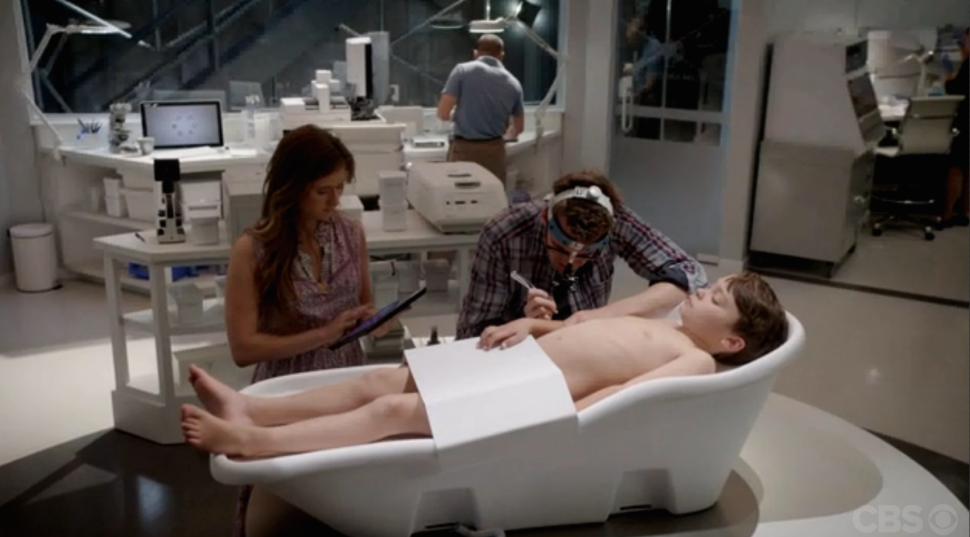