I hate to say I told you so but the creepy robot kid is legit evil and on the brink of taking over the world.

In last night’s episode of Extant, Ethan went way beyond programming himself to dream. He is now, among other things, suddenly able to speak fluent JAPANESE! Also, he learns to ride a bike within seconds. It’s a whole big thing.

For the first time in his young robot life, he’s making decisions on his own, without being programmed to do so. John becomes increasingly concerned that Ethan is progressing too rapidly, thus veering away from his original plan for the little creep to be a normal member of (human) society.  Hear that Ethan? You’re supposed to be a normal human-wannabe-robot NOT a lunatic-savant-human-robot hybrid destined to take over the world!

Luckily, everyone is realizing that the terrifying, saucer-eyed boy is dangerous and the whole episode features people trying to – both literally and figuratively– shut him down.

The first of which is my boyfriend…er, I mean, Julie’s boyfriend, Odin. While on a date with her new beau, Julie spills her guts about her office conflicts with John and her plans for Ethan. After revealing that she hopes Ethan will eventually be able to think completely on his own, Odin replies with only a (sexy but) villainous stare indicating –to all but Julie– that he will use this information against her. Which he later does, in a somewhat crazed rant to a team he and Ms. Fodds assembled. Adorned in a leather jacket and handsomely backlit (#swoon), he explains that he used to be a solider and lost his arm in the war. Seeking justice against the “machines” that killed his colleagues, he’s decided to begin the “revolution” by targeting Julie’s beloved prototype, Ethan (I kind of don’t know how the little creep has anything to do with the war but I like where he’s going with this).

In other news, Molly has either lost her mind for real this time or she’s finally grown a pair and decided to confront Alan Sparks. Her new motto is “No risk, no reward” and she’s apparently willing to risk her life to bring Sparks down. She’s made it her mission to prove that Sparks was putting her in danger by sending her on a mission similar to the one that killed his daughter, Katie. Now Molly wants to find the baby they’re incubating and attempts to contact an ISEA agent named Pierce. Like any woman trying to find out what a man is up to, she takes to stalking him on the internet and later shows up at his house. He agrees to speak with her the next day but right before their meeting he jumps off the roof of his penthouse, causing Molly to go completely freaking rouge!

Rouge Molly is totally different than Regular Molly. Rouge Molly fearlessly shows up at Sparks’ house and confronts her boss about the baby. Her eyes are nearly glazed over with anger and she spouts off a series of threats like “You better get down on your knees and pray for Katie’s forgiveness!” The encounter is kind of thrilling because it’s the first time we see her Halle Berry-ness come out. Although, she makes the mistake of telling him that she plans on finding her baby without realizing that doing so can only lead to him hiding/destroying the fetus he’s incubating so I guess Rouge Molly isn’t all that different…

Whatever. Back to taking down Ethan. Because John is becoming increasingly creeped out by his science-experiment-of-a-son, he decides to limit his ability to learn without programming, despite the fact that this move apparently goes against everything he’s ever believed in! This show. While in the process of resetting the program, Ethan managed to override the request causing John’s (future-y see through computer) screen to flash the words: Access Denied.

John, again not be all “I told you so” but I this should have been evident from the pilot. And technically, since I did in fact tell you the little freak was not to be trusted, you should probably heed my next bit of advice: Turn him off! We know it can be done from that one time the ISEA captured him in the woods. Just take out the battery and call his entire existence a wash or face the cold reality that you are responsible for subjecting the world to this monster. 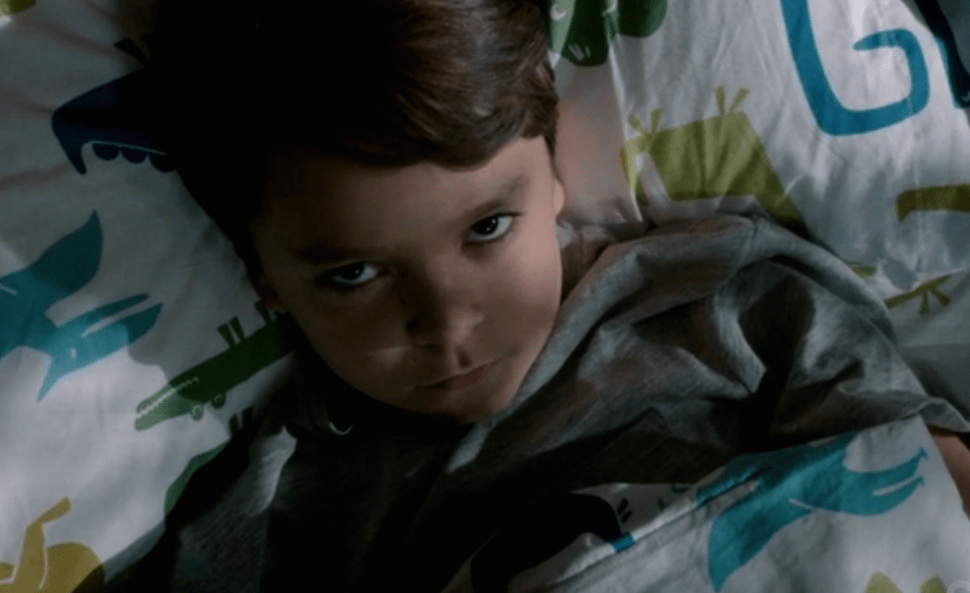