Either download this game, or continue living a happy, productive life. There is no middle path. (Screengrab via Swing Copters)

When Dong Nguyen suddenly pulled Flappy Bird from the app store, the manic decision was met across the world with rage, confusion and a whole lot of regained productivity. Well, that sweet period of respite from mind-numbing frustration is about to come to a sudden close.

A follow-up game called Swing Copters will hit Android phones this Thursday, Touch Arcade reports. The game will be free for download, or you can pay a dollar if you want to slowly chip away at your psyche ad-free.

If at first it looks like Flappy Bird, that’s because stylistically and mechanically, the two games are incredibly similar. In fact, Swing Copters is basically just Flappy Bird, except you travel upward instead of sideways.

Flappy Bird was taken down from the app store after Mr. Nguyen had a personal crisis surrounding the attention he was receiving, leaving everyone with a dev kit to mercilessly clone the original. Notorious for tweeting people to stop playing his widely popular game, he’s been largely missing from the public eye, except for giving the odd interview about Flappy Bird’s mediocre rerelease:

Frankly, we welcome anything that sucks people away from the wallet-slaying cash vortex of Kim Kardashian: Hollywood. 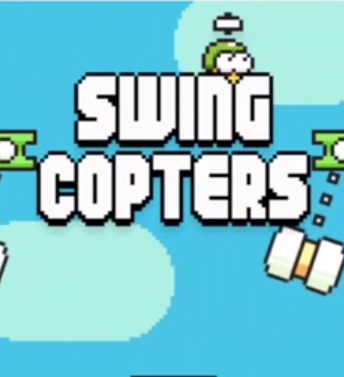