As Graham Hawkes describes it, he was sitting in the front seat of what is basically an underwater sports car when he was ambushed by a great white shark. He’d recognized the shark’s behavior as a territorial challenge, and wanted to pull away, but unfortunately he had business magnate and Virgin Group founder Richard Branson riding shotgun.

“I remember Richard saying ‘Get closer, get closer!’ and I thinking ‘I’m not going to face down a great white shark,'” Mr. Hawkes told Betabeat.

But when you’re training your latest client on how to use their new personal submarine, the customer is always right, and there are some people you just don’t say no to.

Mr. Hawkes is the founder of DeepFlight, a young company that makes recreational submarines for the kind of men who would want a $1.7 million underwater Ferrari.

“They want something unique, better than anything that exists,” Mr. Hawkes said, “and if you want something exotic that no one else can do, you come to us.”

Mr. Hawkes has a unique understanding of how to cater to men who resemble real-life Bond villains. After all, once upon a time, he was a Bond villain himself.

For the filming of the James Bond movie For Your Eyes Only back in 1980, Mr. Hawkes was hired as a mechanical engineer to help with a scene in which Bond is attacked underwater by a small submersible. Considering Mr. Hawkes’ expertise, they had him pilot the vehicle himself, resulting in his singular feature film debut.

Thirty years later, after a lifetime of making small subs for mostly scientific missions, he’s starting to help the pharaoh rich have their own oceanic escapades, and business these days is getting better and better.

Venture capitalist Tom “The Man With The Silver Sub” Perkins is another one of DeepFlight’s customers. Though Mr. Perkins, who has a personal net worth of $8 billion, owns the biggest yacht in the world, it wasn’t an ideal launching platform for his nautical adventures of flying alongside dolphins and exploring the Pacific.

So Mr. Perkins built a yacht just for his submarine shenanigans. The new ship, converted from a former Japanese fishing boat and replete with a small study and library, was named — in the ultimate stroke of narrative perfection — the “Dr. No,” who is the Bond villain from the movie of the same title.

Deepflight submarines are battery powered, and function more like underwater jet planes than other kinds of submarines. Typical subs take on weight to become heavier than and sink, but DeepFlight subs propel themselves downward through , and remain buoyant in case the pilot runs into any trouble.

“It’s an exact mirror image of a plane or helicopter,” Mr. Hawkes said. “You take the power off of a helicopter, and it crashes down. Our craft float back up, so instead of dying, you end up laughing.”

We imagine that laughter sounds a bit like “Mwaah ha ha ha haaaa!”

The newest addition to the line of personal subs is the Dragon, and if the DeepFlight Super Falcon is like an undersea plane, the Dragon is like the aforementioned helicopter, using propellers to push itself downward. The Dragon will debut at this year’s Monaco Yacht Show, a veritable international convention of Bond villains.

The new model is designed to be easier to use, and slightly cheaper. After all, as the rich get richer, there is a growing demand for extravagent toys like the Super Falcon, and Mr. Hawkes needs a model that doesn’t take days of training to be able to use.

“The market is really opening up,” Mr. Hawkes said. “Before we never had this opportunity, we were so specialized. Now, the rate of sales has picked up ten-fold, and it’ll pick up ten to 100 fold in the near future.”

For anyone concerned about the adventurism of the elite, worry not. As long as major CEOs don’t start pulling real Bond villain maneuvers like building privatized rocket ships or building massive drone armies for veiled humanitarian causes, we’re still in good shape. 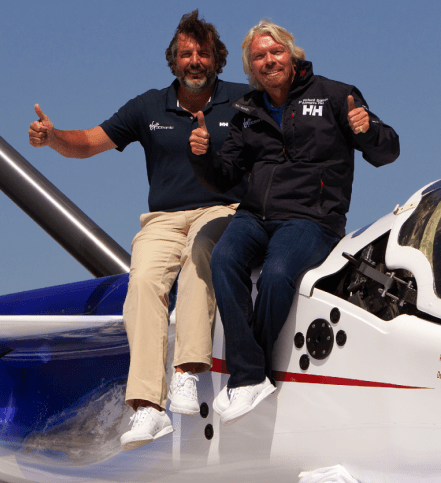