“It’s the height of arrogance. It’s totally illegal. His seizure of Crimea was illegal,” said Clark, the former North Atlantic Treaty Organization (NATO) Supreme Allied Commander in Europe from 1997 to 2000. “One of America’s great contributions to the world has been the support of human rights and international law. We settled the fighting in the Balkans, which I was a part of, and stopped Serb ethnic cleansing. All that was about democracy, legal governance and human rights. What Putin is doing threatens all of that.”

Clark’s comments came amidst news reports of 20,000 Russian troops and 1,300-plus armored vehicles amassed on the southeastern border of Ukraine, close to the front lines of an ongoing war between the Ukrainian government armed forces and pro-Russian separatist rebels in eastern Ukraine that has turned in favor of the government.

Clark presided over the 1999 expansion of NATO to the Eastern European countries of the Czech Republic, Hungary and Poland. Hungary and Poland both border Ukraine. While Clark said now is not the time to seek Ukraine’s entry into NATO, other measures need to be taken to support Ukraine in its struggle with Putin-led Russia.

“These are people who want what we want. They’re trying to live a democratic life trying to get rid of the malign influence of Putinism in Ukraine, which is oligarchs, corruption and selling gas as the highest prices in Europe to take money out of the Ukrainian economy and transfer it into Russia,” said Clark said. “What should happen is that there should be strong sanctions against Russia. Other nations of the West, not just the United States, should make sure that the Ukrainian people have the means to defend themselves and be given the diplomatic support for doing it. It’s every country’s right to defend its own territory, just like it’s Israel’s right to stop these rocket attacks coming out of Gaza. It’s Ukraine’s right to control its territory. We have to support international law in this case.”

Clark’s remarks were made in Fair Lawn immediately before he spoke in support of the Bergen County Executive candidacy of Bergen County Freeholder Jim Tedesco, the Democrat who is challenging Republican incumbent Kathleen Donovan in November. Clark is no stranger to politics himself. He sought the Democratic nomination in the 2004 U.S. Presidential race, originally backed Hillary Clinton in the 2008 campaign, then stood behind Barack Obama after he secured the Democratic nomination.

Clark, who expressed his support for Clinton’s potential 2016 Presidential bid, was asked by PolitickerNJ if he wished to serve as U.S. Secretary of Defense or U.S. Secretary of State, a job that could be coveted by New Jersey’s own U.S. Sen. Bob Menendez (D-NJ), if Clinton were to run and win.

“I’m happy where I am. I’m in the private sector, and I’m able to contribute and to add my voice on issues of national policy and support great candidates like Jim,” said Clark, who runs his own consulting company in Little Rock, Arkansas and chairs a boutique investment bank in Washington, D.C.. “It’s very satisfying.” 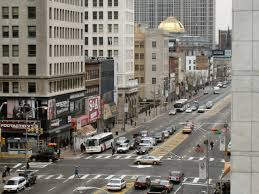