Frankenstein, MD is perhaps the most torn I have ever been over a review. On one hand, it features corny sitcom writing, over-the-top acting and the same physical comedy often seen in children’s programs. On the other, it’s a show deeply rooted in the famous Mary Shelley novel with details and modernized nuances that the literature nerd in me has way too much fun noticing. Hmm, to hate or not to hate? That is the question.

The show —the latest transmedia series from Pemberley Digital and PBS Digital Studios— is kind of like the love child of Bill Nye the Science Guy and The Lizzie Bennet Diaries. Like the Lizzie Bennett Dairies, which is an Emmy award-winning web series based on Jane Austen’s Pride and Prejudice, Frankenstein MD is based on Ms. Shelley’s Frankenstein. The show includes the novel’s famous characters and motif’s with a few major differences. Most notably, the novel’s protagonist Victor Frankenstein is now the young medical student, Victoria (played by newcomer Anna Lore). Cleverly playing on Victor Frankenstein’s constant pursuit of knowledge, young Victoria is a soon-to-be physician who conducts experiments with her assistant Iggy (as in Igor) and the friends she grew up with in Geneva (Where Victor Frankenstein lived) while finishing up her program (Perhaps at University Ingolstadt? Because that’s also from the book – something I loudly pointed out while watching the show with a friend #NerdGlory.)

The scripted web series targets a “literary minded, scientifically curious” according to producers Bernie Su and Matt Vree, who took the time to tell me a little bit about their series. While the show is intended to reach a mostly female audience ages 13-30, it has a definite juvenile feel and is likely best suited for scientifically curious Jr. High students. However, unlike most TV shows geared toward a young audience, watching  Frankenstein, MD can actually make you smarter (“Much, much smarter” Victoria will tell you.) making it hard to full-on hate. I told you I was torn! Though it may be tempting to write off Frankenstein, MD as a lame kids show, there is more than initially meets the eye. Aside from the actual science that can be picked up from the show, young viewers may also develop a strong sense of self and a healthy respect for driven, intelligent women. Interestingly, Mary Shelly– the daughter of famous feminist William Godwin and only 18 when she wrote the now classic novel– famously depicted the women in her books as rather passive. The web series does the opposite by not only changing the lead character to a female but also making her smart, strong willed and filled with both an insatiable desire to learn about science and an unwavering belief in the field itself.

This is clearly seen in the second episode in which Victoria gets a visit from her mentor, Dr. Waldman (pointing out that this was a character from both the novel and the movie got me a sharp elbow in my side but it was totally worth it #ThisShowMakesMeFeelLikeAGenius.) Like the original M. Waldman, he is skeptical but always supportive of the incredibly driven Victoria. After a mishap during an experiment in the previous episode, Dr. Waldman decides to stand by and monitor the e. coli presentation. Throughout the experiment, they debate a woman’s role in the medical field and reference Victoria’s late mother and role model. Victoria also writes about the ways in which her mother —here used as another emblem of the strong female archetype— influenced her on her personal blog (Note: Mary Shelly’s mother was also markedly intelligent and passed away after giving birth.)

Her blog is just one of the many forms of social media being utilized by the creators of the show. Like Pemberley’s previous successes, Frankenstein, MD follows a transmedia format. Fans of the show can interact with their favorite characters on their Twitter, blogs and Tumblrs. Each Tweet is in the character’s voice and provides creators with a medium to communicate with the show’s audience in way that is not only efficient but innovative.

Actually, the feedback from viewers is one of the best parts of the show. Unlike the arbitrary and often caustic commentary left under most pop culture videos, the Frankenstein, MD YouTube page shows character analysis, history and really big vocabulary words being bandied about.

Youtube comments from a clip of The Real Housewives of New Jersey.

Bottom line: No, Frankenstein MD is not going to become my new favorite show but then again, I’m not exactly their target audience. I do, however, think young people should watch the show as they would probablyfind it is not only entertaining, but more involved than typical TV shows. Though it is more than a little cheesy, I can not hate on a show that teaches young people that being smart is cool. It sets a standard for television that more TV shows should get behind and for that reason I would highly recommend it to a “literary minded, scientifically curious” 12-year-old. And I think that is a compliment. 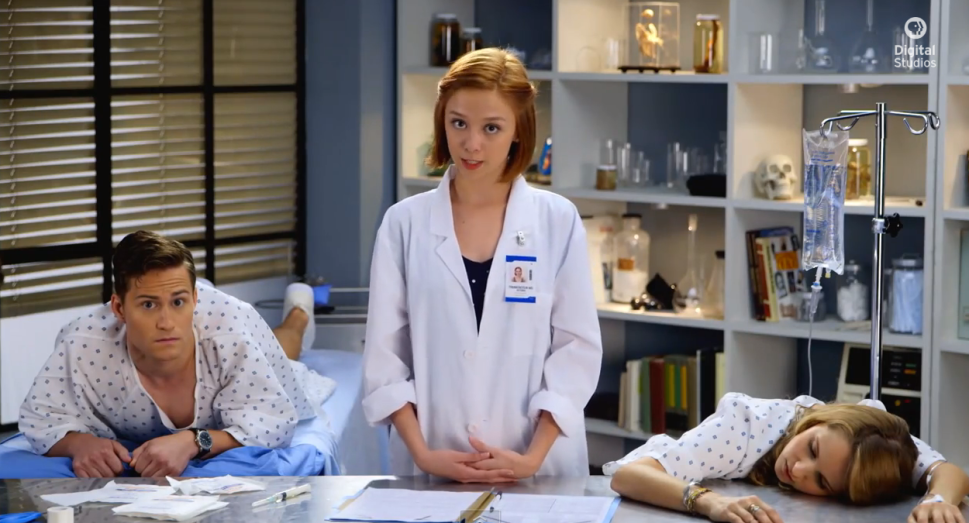