Nina Burleigh: “I am an ugly old hag, jealous of Women Against Feminism’s kewpie doll selfies, undesirable and therefore probably deserving of a sexual assault.”

Last week, I suggested that Women Against Feminism might be a sock puppet for the right. I was only half-joking, then. Given the absolutely hysterical right wing response to that observation, I am now convinced beyond a doubt that it really is some kind of Astroturf project by well-funded wingers to win over females, who, unfortunately for conservatives, constitute slightly more than 50 percent of the population and have been running from them in droves for years.

I’m pretty familiar with right wing internet swarming and online bile. Some years ago, Rush Limbaugh read from a story I wrote about my kids’ uber-patriotic country school. Hundreds of online comments appeared within hours, along with emails to my personal in-box, some threatening to take away my kids and blow up my house.

All women who write, right or left, get sexualized hate mail, and we get used to it. A few weeks ago, after I wrote about the Supreme Court’s Hobby Lobby decision, I received a letter at my home address from man who, after expressing some disagreement in a few sentences, went straight to the point and disparaged my sexual attractiveness. Sex is always just beneath the surface. The Twitter mob immediately went below the belt: The best response they could formulate to my observation was that I am an ugly old hag, jealous of Women Against Feminism’s kewpie doll selfies, undesirable and therefore probably deserving of a sexual assault.

It is now abundantly clear that Women Against Feminism is a right-wing male operation at some level. The most vociferous defenders of the site are men. For the first day or two, frothing mad white knights rode to the rescue while female supporters were almost entirely absent.

I won’t quote from the choicest unprintable comments (a few printable ones are included above), but these are some very angry men, egging each other on with a wall of pornographic Tweets addressed to what one of them gleefully calls a “defenseless liberal.”

I’ve joked about sex in the past in a political context, and maybe that gives them more license than usual. As the feminist writer Jessica Valenti learned recently when she joked about organizing sex protests in the aisles of Hobby Lobby and got swarmed with online sexual abuse, when females mention sex in a joking or political context, kink-obsessed wingers take it quite literally. Out comes the Vaseline and Kleenex whenever they see your name.

Eventually, the guys roused their female auxiliary. These women’s chief complaint was that I had “slutshamed” the women on the Women Against Feminism tumblr by pointing out how they posed and dressed themselves.

This accusation brings up another broader point about conservative tactics. While they espouse socially traditional living, young conservatives secretly fear it’s not hip to do so. You hear it all the time. A conservative friend of mine (I do have some) recently bemoaned the fact that even when they have good ideas, the right is simply not as “cool” as the left. Personally, I don’t think coolness matters in politics, but I get what he was talking about. The way they deal with their insecurity is this: conservatives can’t come up with snappy phrases like “slutshaming” – for many, it’s their stock in trade when dealing with uppity females, after all – they will, however, steal the phrase and use it when it serves their cause. Like sexual harassment, about which they could give a rat’s ass, they turn progressive concepts to their advantage but only when it suits them (poor Monica, sexually harassed by Clinton, hey wait there’s a law for that, let’s impeach him!).

As to what I can or cannot say: as a professional writer, I reserve my rights. I recently wrote a long story for the New York Times Magazine about the insurance-scam murder of a woman I knew. I described a “stout, blonde” female FDNY lieutenant admitting on the witness stand at trial that she knew about the murder and didn’t report it. Online commenters complained that I’d broken a new rule of professional conduct by describing how she looked. Disturbingly, the commenters were more offended by the words stout and blonde than they were by the fact that a fire department official had helped cover up a real murder.

Political correctness, when it comes to writing about females, has unfortunately saturated the culture, and it may be true that overzealous progressives caused that. Yet conservatives, who once claimed to be against it, will deploy it whenever it helps their cause.

Back to the men and their lathered-up misogynistic online frenzy. On Saturday night, a blogger I’d never heard of named Glenn Reynolds, but who apparently has a vast basement troglodyte following, took me to task in a blog post.

Within minutes, his fans were spewing hundreds of personalized hate Tweets. All variations on the same theme – I must hate women, I am ugly and old and yet want hard working Americans to buy my free birth control because I’m a whore myself.

There are some benefits to watching these online storm troopers, though.

Their spittle-flecked bile helps us see the depth of right-wing American rage at women, and hints at the sick reasons for it. They display the kind of male entitlement and rage against women that’s behind domestic violence and child sexual abuse. They remind us that their women, the so-called Women Against Feminism, are actually the ones who need it the most.

Furthermore, their panicky fury reveals that Women Against Feminism is profoundly dear to the winger cause. I’m not sure who’s behind it, but someone ought to follow the money. The right is desperate to draw at least some single females to a political cause that is demonstrably anti-female and antithetical to every one of their interests – from control over when and with whom to have children, to rape laws, to family leave and fair pay – and the desperation has now reached crisis proportions.

Finally, thank me! With so many obsessive woman-hating trolls staying indoors on a Saturday night to vent sexualized hatred, parents across America could rest assured that their middle school cheerleaders were safe for a night. 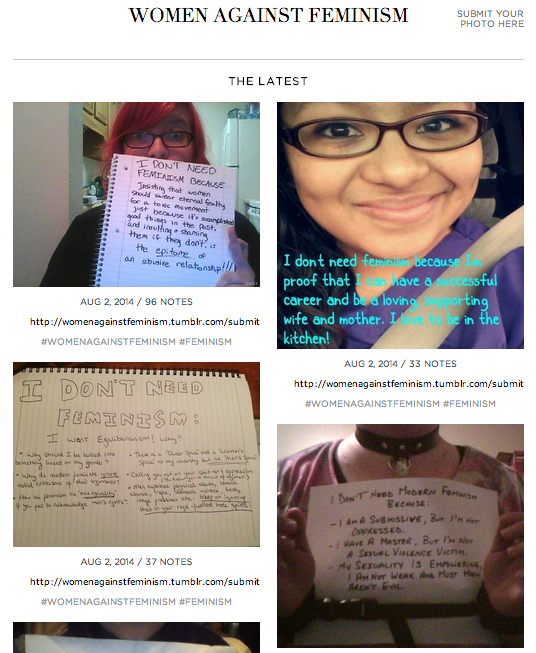